The Gumdrop Tree, by Myron Unger by John Zussman
50
(86 Stories) 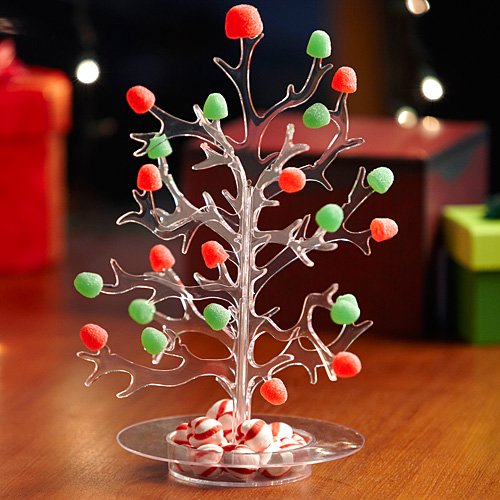 The gumdrop tree came to our house unheralded,
And unpretentious.
It stood six inches tall.
Its silver-foil branches were covered with gumdrops.

But little hands lifted the top of the garbage pail, and discovered the resting place of the gumdrop tree.

We put it in a corner of the kitchen,
And its tiny, colored candies began looking more and more like blossoms.
Until one day, we decided to eat them….
The gumdrops on the gumdrop tree.

It was after dinner that night,
We placed the gumdrop tree in the center of the floor,
And sat in a circle around it.
And we told each other what had happened to us that day,
And we laughed.
Then we each had one gumdrop.

And each night,
Thereafter….
We would put the gumdrop tree in the center of the floor,
And sit around it….

We would sing songs, or tell stories, or just visit…
And it was warm,
And we were warm….
And one night we even danced around it,
Then we each ate one gumdrop.

The tree began losing its blossoms,
And some of the limbs were almost bare….
And silver.
Then, it seemed like we found more importance in each gumdrop.
We took more time to savor the chewy sweetness.

And then the night passed when we ate the last gumdrop off
the gumdrop tree.
And we clapped our hands for all the joy it had brought us.

And the gumdrop tree was discarded for we said we could
never replace the sweets we had taken from it….

And it was then that the gumdrop tree was again placed in
the center of the hard linoleum floor,
And flat on their tummies,
Chins resting on hands and elbows,
The little faces stared at the gumdrop tree,
And remembered the colored drops…
And smiled….
About many things.

Now the simple wisdom of children often remind us of God’s Way,
It is always an unbelievable quality,
Yet quite proper, and in order.
For children are close to heaven.

And so it was with the gumdrop tree…..

For the silver branches of fleeting life are not shorn of the
pleasures that once grew there.
There is always the precious memory….
Of Youth,
Of Courage,
Of Love,
Of Deeds……
On each barren branch.

And for some of us,
There may still be the promise of the remaining gumdrops.
And the knowledge that we must taste each one succinctly,
As a bee sucks honey.

Myron Unger, my father, died of cancer in 1960, when I was ten. Thirty years later I inherited a thick folio of his manuscripts, from which I’ve previously posted his poignant reflection on fatherhood, Upon Reaching the Age of Three. This poem seemed especially appropriate for the relaunch of Retrospect because of the way it celebrates savored memories. But the image of gentle, wise hands saving the discarded tree from oblivion also seemed relevant! With gratitude for stories old and new.

11 Responses to The Gumdrop Tree, by Myron Unger