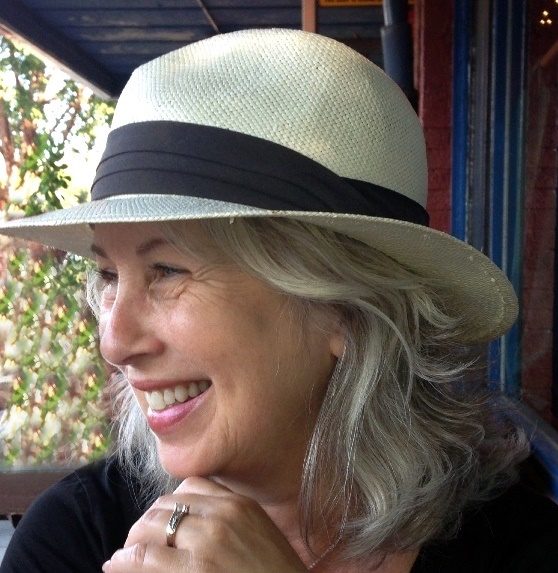 My mother started making hats right around the time I became a teenager. This was not coincidental, I believe.

It was a good time for her  to find something to do. Not the happiest of stay-at-home mothers in the 1960s, she desperately needed an outlet. First she helped form a singing group of PTA mothers. Then Mom started taking millinery classes in the evenings and afternoons through the local adult school, and, once she had the basics down, let her creative instincts go wild.

She hunted around for stores that sold ribbon, trim, and fabric flowers; she got small samples of fur from my great Uncle Sam, who owned a fur salon in San Francisco. She used mink and lamb to make stylish hats for our mild California winters. Her springtime hats made of straw were adorned with flowers and ribbons in vibrant blues, pinks, and oranges.She found a shop that sold many kinds of feathers: long elegant plumes and small, colorful ones. For one creation, she spent hours painstakingly gluing pheasant feathers in overlapping rows on a stiff-backed fabric form. To help with the construction of her hats, she bought a couple of hat forms: wooden head-shaped blocks that she used to get the shape and size of her hats just right.

When I was thirteen, my family moved to a bigger house that had a walk-in closet in the hall. Bigger than a standard closet, this became her hat room. Over the years she piled the many shelves with her hat boxes, which contained the orange straw with a dipped brim; the tufted pale blue chiffon that sat like a crown on her head; the fabric pillbox she made for my sister; the black lambswool with a small decorative sword, and so many more. She made hats with sequins, with tall plumes, with veils; head-hugging cloches and wide-brimmed straw hats a la Holly Golightly. 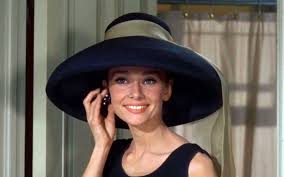 When friends and relatives asked my mother to make hats for them, she did. Sometimes she got it right and they were pleased…and sometimes she missed the mark.

Although on many occasions my mother told me I had “a head for hats,” she never actually made me a hat. When we were little girls, she bought  me and my sister hats to wear to fancy events like weddings or bon voyage parties (we went to a couple the year we lived in New York). I don’t know what she meant by her observation regarding  my head and hats. I never got into wearing them, but I do love trying them on. 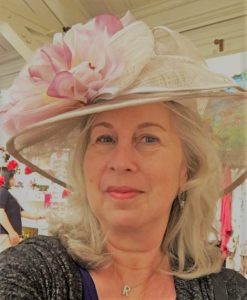 Appropriate for the Kentucky Derby?

I don’t look especially happy in the picture below on the left, but I did like the hat. And may I point out that the smiling woman in this picture with me and my sister is the famous wife of one of my dad’s Army buddies: June Taylor. My sister and I were actually June Taylor dancers (in name only) because we took tap lessons at her Manhattan studio. We are pictured here on the right with our dance stuff outside the studio. Same hat. 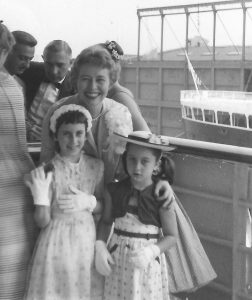 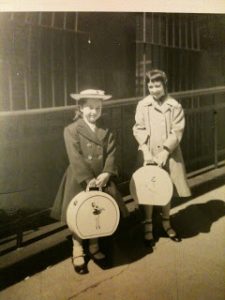 I’m not sure when my mother stopped making hats. After I moved away from my parents’ house, I didn’t keep track of her goings-on very much. With both daughters out of the house, my parents began doing a lot of traveling– hat-making fell by the wayside.

After my mother died, a few years after my dad, my sister and I faced the task of emptying out the house. Once again, we ventured into the “hat closet” and had to decide what to do with all those  boxes and leftover pieces of fabric and sizing, and the pair of wooden heads. My sister insisted on keeping many of mom’s hats, but we gave away several at the “trunk show” we put on. 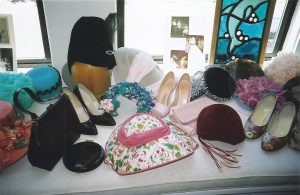 I wish I had more pictures of her wearing her hats, but here are a couple 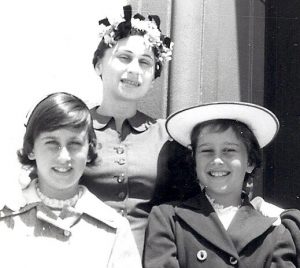 Here she is at a wedding, wearing a flower-bedecked cloche in spring colors,me in that same big-brimmed number.

Wearing the blue chiffon, with my sister in her pillbox and me with a red beret 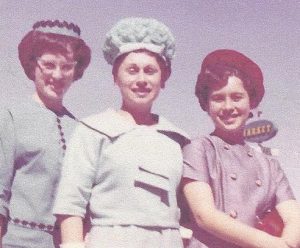 On this chart of greatest hat hits from the ’60s, I see a few familiar forms. Many of these styles were among the creations she proudly wore for years. When the times and styles changed, and hat-wearing occasions were no more, my mother’s hats were carefully nestled in tissue paper and placed in big round boxes, stacked high on the shelves of the hat closet. 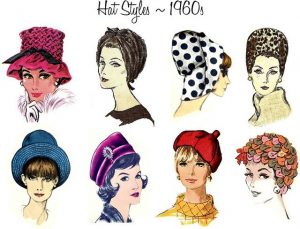 12 Responses to The Milliner’s Daughter

“Get yourself a hat so you look like somebody!”
by Dale Borman Fink