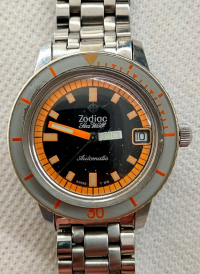 As I made that move, the brunette cutie to my right clasped her hand around my wrist and whispered "that is SO annoying!"

For high school graduation, my parents bought me a fairly expensive diving watch, a Zodiac Sea Wolf. One feature of the watch was the stainless steel link bracelet it had by way of a band. When worn as a watch, not dive gear, it always seemed to be a bit loose on my thin wrist.

That watch changed my life.

In September of 1974, I entered college as a Marine Biology major. Like pretty much every college freshman in the United States, one of my courses was EN101, English Composition. Upon entering the classroom that first day, I chose a seat where I prefer to sit in any class; not directly in front of the teacher, but not hiding and not way out on the periphery. The spot I chose was just to the left of a short, shapely, olive-skinned girl with bobbed, dark brown hair. Brown eyes. I thought her quite pretty, in the Italian mode that I especially favor, but her presence had no bearing on my seating choice.

Although I am right-handed, I had taken to wearing my watch on my right hand; an artifact of my SCUBA gear configuration. I also had no idea that I had developed a habit of readjusting the position of my watch by raising my hand at the elbow and rotating it to shake the watch down a bit, until one day early in the semester, as I made that move, the brunette cutie to my right reached over, clasped her hand around my wrist and whispered “that is SO annoying!” (*)

Other than maybe a casual nod or”Hi” once or twice, that was the first time this young lady had ever spoken to me. I remember being a bit shocked. I smiled at her, removed the watch and put it in my pocket. After class I apologized for being “SO annoying” and that was sort of it. For a week or so, anyway.

The young lady was Maria. Yes, that Maria.

Funny how a watch can change your life.

* She had a habit of emphasizing the word “so” in her speech. I thought it SO cute!

8 Responses to The Sea Wolf