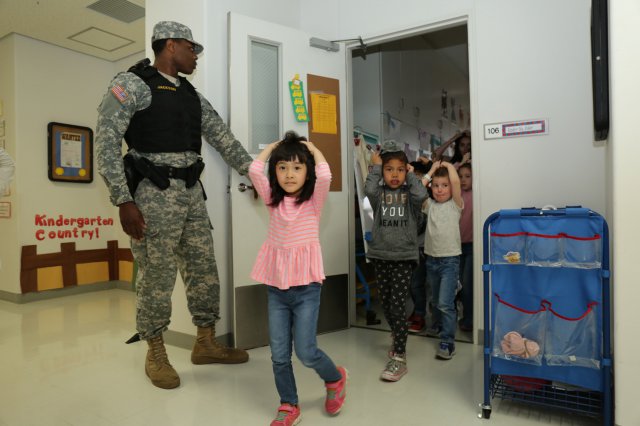 I am part of the generation that hid under desks in elementary school to practice what to do if the evil Soviet Union dropped an atomic bomb on Detroit. This remote possibility led to a particularly vivid and recurring nightmare. I grew up in a small ranch-style house, and my bedroom was in the front. My brothers’ and parents’ bedrooms were in the back of the house. In my nightmare, there was an enemy camped out in my living room, which I had to walk past to reach the rest of my family. I was trapped, either in my bedroom or under a desk at school.

As part of the duck and cover generation, I despair that my legacy to today’s school children is a country in which they understand that there is no real safety as long as the gun culture persists.

But here’s the thing. While the Cold War raged, it was highly unlikely that a bomb would fall on my school or hostile forces would shoot me as I tried to reach the safety of my parents’ room. These terrors largely existed in my imagination, with the exception of the Cuban Missile Crisis. That one was very real. For my grandchildren, their fears are a daily possibility, a living nightmare.

All of my grandkids, from the teens to the preschooler, have had to participate in active shooter drills. During lockdown drills, they have had to hide in closets or dark, barricaded classrooms and not make a sound. Other times, they have practiced running from a shooter in zigzag patterns to evade bullets. Sometimes, there is even a mock shooter in the hallway trying to open the door to their classroom.

In 1988, Laurie Dann, a mentally disturbed young woman, entered Hubbard Woods Elementary School in Winnetka, Illinois, a very safe community, where she killed second grader Nicky Corwin and wounded five others. Although people now understood that schools were a soft target, most viewed this attack as a fluke. After 9/11, everything changed.

My preschool had to add Let’s Hide and Let’s Take a Walk drills to our Windy Weather (tornado) and Fire Drill practices. Because there was a daycare in the Twin Towers, it became important for these little ones to know how to line up with a walking rope and for their teachers to take attendance, bring the contact book, and quickly leave the building, walking toward one of two safe locations, depending on the perceived danger. We tried to shield our young children from the actual threats out there. Back in the nineties, I remember one little guy who asked me to show him the tool he thought was a fire drill. No one asked that after September 2001.

We added many pages to our Risk Management Handbook as well as a camera and locked entrance system. Now, the girl who had nightmares from hiding under her desk in the fifties became the first line of defense for 250 preschoolers. Who looked safe to buzz in? A man who was also a stranger was most suspect, but a parent could also be an angry shooter. A woman who claimed she was someone’s babysitter could be another Laurie Dann.

If young school children and their parents want real nightmares, the slaughter of 20 young children and seven adults at Sandy Hook Elementary School on December 14, 2012 should do the trick. The school had just installed a buzz-in security system like the one at my preschool and the door was locked.  Sadly, they were no match for the Bushmaster AR-15 rifle in the hands of a disturbed young man who shot his way into the building. On Valentine’s Day, 2018, another crazed gunman with an AR-15 assault rifle killed fourteen students and three adults at Marjory Stoneman Douglas High School in Parkland, Florida. According to CNN there have been at least 31 shootings at schools in our country since then, one every 11.8 days, killing 19 and injuring 44.

Young children know that bad people with guns can try to shoot them in school. Duck and cover no longer cuts it. I wish my grandkids’ fears could be as innocent as mine were. But theirs are as real as the weapons we allow pretty much anyone to purchase. We can have lockdown and active shooter drills. We can install safe entry systems with cameras. What we can’t do for my grandkids’ generation is promise them they will be safe in school, not as long as unstable and angry people can purchase guns capable of killing as many children as possible in a relatively short time.

As part of the duck and cover generation, I despair that my legacy to today’s school children is a country in which they understand that there is no real safety as long as the gun culture persists.

8 Responses to From Ducking Under Desks to Active Shooter Drills