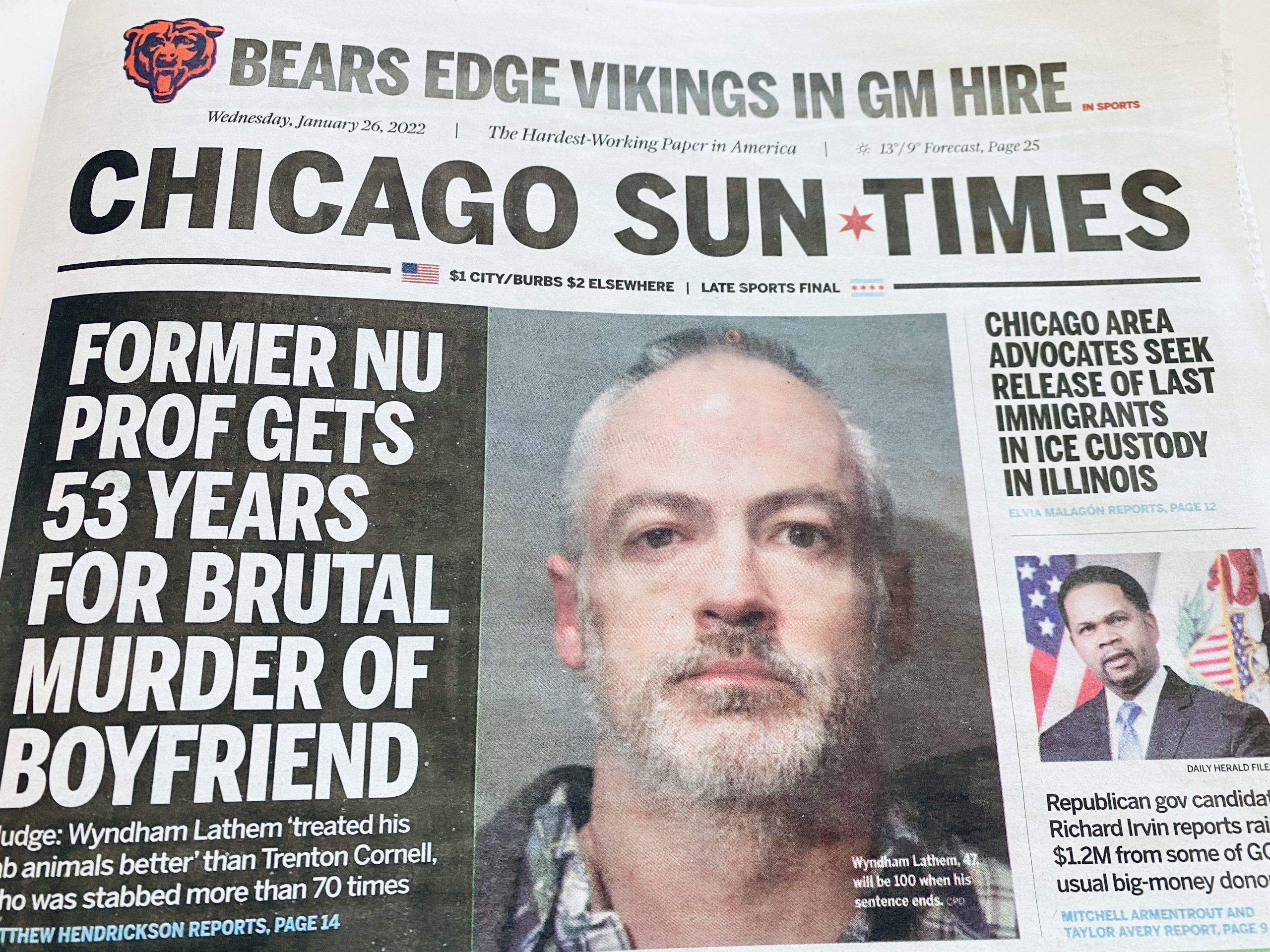 Growing up in a suburb of Detroit, we received two papers every day, The Detroit Free Press in the morning and The Detroit News in the afternoon. The day started with the morning paper, which my parents read with their breakfast coffee. I remember my father coming home from work, settling into his favorite chair, and reading his evening paper. We were told not to disturb him as he was unwinding from work. Only dinner could interrupt this ritual.

Still, on a quiet Sunday there is nothing more relaxing than working my way through that pile of newspapers.

Sundays were a real treat, as we had a huge pile of newspapers to go through with comics, Parade magazine, TV guides, and all kinds of tantalizing ads. My brothers and I loved having two sets of comics, some of which were funny and others that were like soap operas. I remember Mandrake the Magician, Blondie, Li’l Abner, Nancy, Dick Tracy, Rex Morgan, M.D., Peanuts, Pogo, and Archie. On Sunday, these were in color and we could use our Silly Putty to pick up and reprint the images.

When I moved to Chicago in 1967, there were three major newspapers, The Daily News, The Sun Times, and The Chicago Tribune. We subscribed to the Daily News, although I did sell (rather unsuccessfully) subscriptions to the Tribune the first summer I lived there. The Daily News, an afternoon paper, was more liberal, The Sun Times was good for commuting (being smaller in size and coming in the morning), but the Tribune’s editorials were a turn off to us. We may have gotten it on Sundays when our kids were little for all of the extras like the comics, ads, and TV magazine. Since nobody recycled newspapers back then, I didn’t care how many of them we received. Most of it went into the trash except for the color comics, which we used for wrapping paper.

Sadly, most of these physical newspapers are gone. Those that have survived are often owned by companies that provide a minimum of local news and the same national news coverage, usually politically biased, regardless of where you live. After our beloved Daily News bit the dust in 1979, we reluctantly switched to the Tribune, mostly for the columnists (think Mike Royko) and sports. 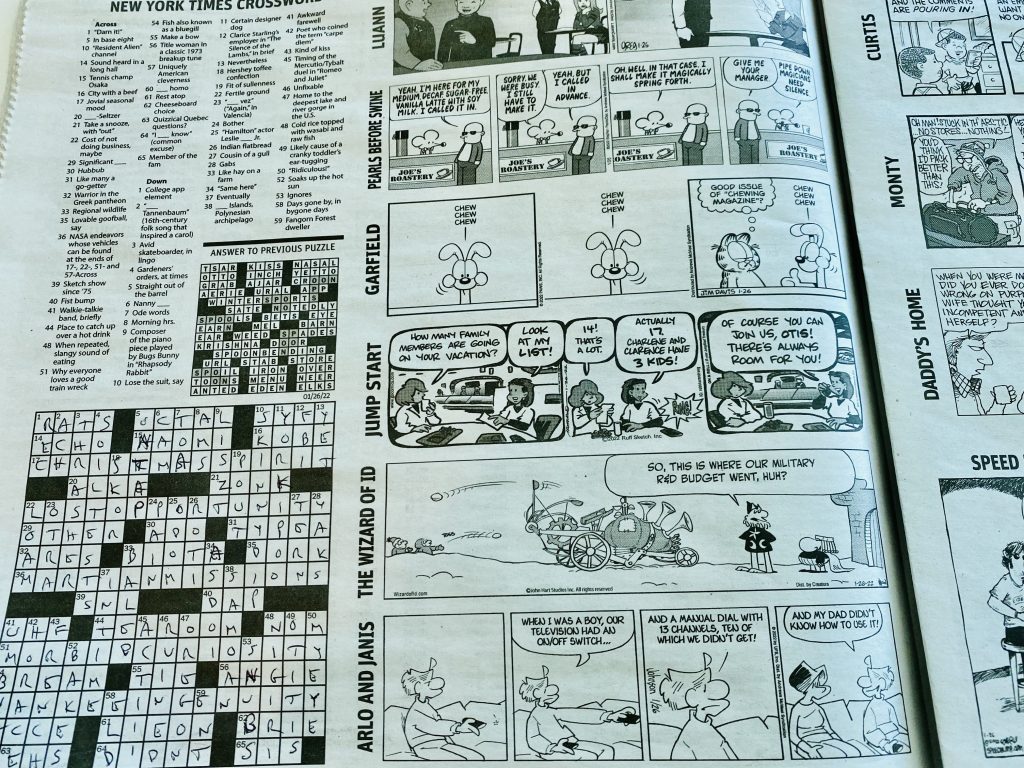 I am part of the generation that prefers to read actual newspapers, although I must confess to being an online subscriber to The Washington Post. Our daily paper is the Sun Times these days. The Chicago Tribune is a shadow of its former self and still editorially unacceptable. The Sun Times is not so much physical paper to manage, as we now recycle using a smallish chute in our condo. It also has a good sports section and New York Times crossword, which my husband loves. But Sundays are a different story. Not only is the Sun Times much bigger, but we also get the Sunday New York Times.

I find this avalanche of news and the physical piles of paper overwhelming. My compulsion to try to read everything, something I do not feel about online news, makes me anxious. For one thing, I should be reading Retrospect stories. And we have a weekly zoom with good friends on Sunday mornings. Plus, I could be reading a good book. Nevertheless, I persist and try to plow through all of these newspapers by Sunday night. I allow myself to save the Times book review and magazine sections for later in the week, but everything else must be recycled as soon as possible. Still, on a quiet Sunday there is nothing more relaxing than working my way through that pile of newspapers. 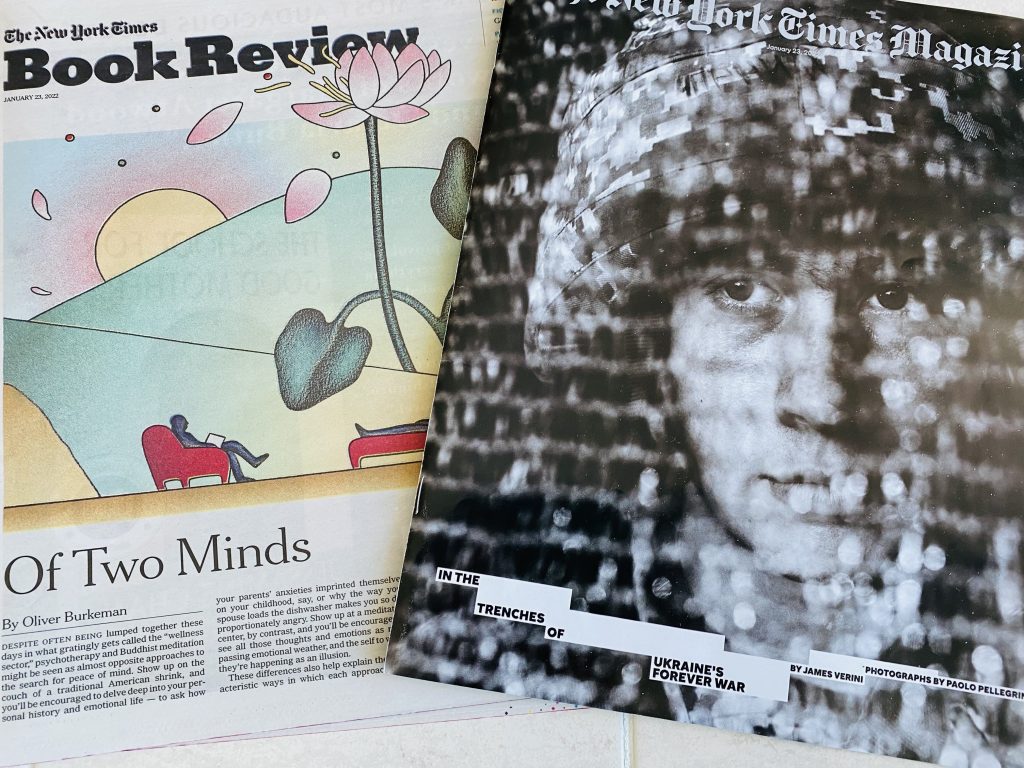 To savor over the week

16 Responses to The Sunday Paper