There and Back Again by Tom Steenburg
50
(58 Stories) 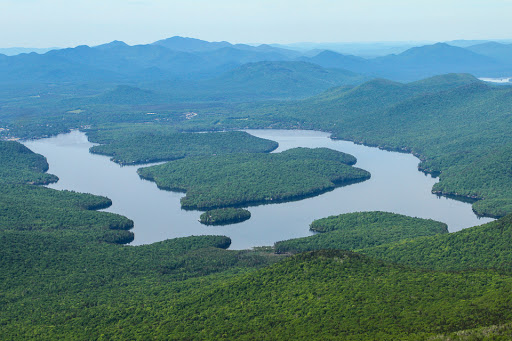 A view of Lake Placid from the top of Whiteface Mountain.

Responding to Suzy’s story, “Movin’ Out”, I said that my moving experiences were all bad.  That’s true but let me clear: I mean the moves themselves.  Can they be otherwise?  But the destinations?  Or should I say, one particular destination? That’s a different story.

My experience in returning to Lake Placid that late afternoon encapsulated the rightness of my choice.

I grew up in upstate New York.  Early on our family vacationed in the Adirondacks, renting a cottage for two weeks each summer for two summers and taking a traveling vacation through the region another year.  I don’t know that my parents were naturally “lake and mountain” people; subsequent events suggest otherwise, but we were nowhere near an ocean, and at that time there were no superhighways, just endless two-lane roads.  I think we chose the Adirondacks because that’s what my dad knew.  He, too, grew up in upstate New York and in his medical school years he spent summers working as a porter in a mountain lodge near Lake Placid.  I loved the Adirondacks.  Clean air and lakes.  Comfortable summer temperatures.  Bliss.  Alas, by the time I was a teenager we had gravitated to the seashore after all.  Jersey one year, Cape Cod the others.  To me they were just “okay”.

My first wife was a bona fide lake and mountain person.  Her family even owned a “camp”, as they were called, on an island in Lake Winnipesaukee, in New Hampshire.  The fall that we met we took at least a couple day trips to the area for hiking and picnicking on the shore of the lake.  Later on, after we married, we rented cottages on the lake for several summers, and came back with our sons.  I was almost back in my element.  The lakes region of New Hampshire is wonderful but it’s not the Adirondacks.  But from southeastern Connecticut it was a heckuva lot closer.

Years later, with a subsequent spouse, I relocated to Chicago.  Her sister was a knowledgeable travel agent and early in our five-year tenure in Chicagoland she urged us to go to a resort on Lake Placid that other of her clients had recommended highly.  I certainly needed no encouragement, so off we went. We, and I particularly, adored it.  So much so that before we left we booked a camp for the following summer.  And what a camp!  Lake Placid is about five miles long, give or take, and perhaps a half mile wide.  It has three islands bisecting the lake along its long dimension, the smallest and northernmost of which, comprising about ten acres, had but a single camp.*  That’s what we rented.  Not at all cheap, but the setting, in the shadow of Whiteface Mountain, was beyond compare.  I remember arriving the second year just after a brief rain shower and seeing a well-defined rainbow that literally ended in the lake about one hundred feet from our dock.  Talk about a pot of gold!

Not long before that trip I suffered a major change in status.  The parent company structured it as an “early retirement” but it wasn’t.  I was let go.  Turns out that few emperors relish comments on their wardrobes.  After months of fruitless job search**, before and after that second trip to Lake Placid, I decided to undertake consulting.  Now, the thing about consulting, in an era of great and increasing connectivity, is that much of it can be done remotely, just as John reports in “A Political Movement”.  So the fact that I was in Chicagoland and my clients were in Manhattan and California was of no great consequence.  Upon returning from our third sojourn to Lake Placid, a glorious three weeks this time, I thought, “hmm, we don’t have to be here in Illinois, which we tolerate but do not really enjoy.  Why don’t we go back east, to my native New York, generally, and Lake Placid specifically?”  So we did.

I am sure that we were not the first to consider making a vacation destination a permanent home.  For many, perhaps, it’s just a pipe dream, and for some who take the plunge, all too soon the charm of the place in high summer is submerged in the reality of year-round residence.  But not for us.  Being a veteran of two prior relocations I had learned that when one is unfamiliar with a new area it is prudent to postpone buying.  We decided to rent in Lake Placid itself.  We were fortunate to find a relatively new house built by a Long Island heating and plumbing contractor as a winter headquarters for the family while their son competed in luge.  They were in the midst of some life changes at the time and put in onto the rental market just as we started to look for a place.  Terrific house in a great location, in the shadow of the Olympic ski jumps in an area known as the Plains of Abraham, so named by an early resident, John Brown.  Yes, that John Brown.  Whose burial place and memorial were about a half mile south from the house.  Where he continues to lie a-moulderin’ in his grave.

I took occupancy in late October that year.  My wife largely remained in Illinois to be on site as we attempted to sell our house.  This was particularly useful to me as I undertook preparation to take the New York bar exam the following February.  My comfort in the separation foreshadowed subsequent events, however.  In any event February rolled around and off to Albany I went to sit the exam.  My experience in returning to Lake Placid that late afternoon encapsulated the rightness of my choice.  It was a beautifully clear day, and dusk descended as I approached Lake Placid.  This was 2005, the twenty-fifth anniversary of the 1980 Olympics in Lake Placid, and a multi-day celebration was ending that evening.  The route into the  village brings the ski jumps in view from a distance, and from there the road winds past the horse show grounds, which served as the parade grounds for the Olympics and the site of the Olympic torch.  As I came around the bend that brought the ski jumps in view I caught sight of the full moon, very bright.  As I approached the show grounds I saw that the torch had been lit for the evening.  The juxtaposition of the happy completion of the bar exam, the beauty of that winter night and full moon, and the majesty of the torch and what it represented are vivid memories that remain with me to this day.  I was home at last.

Postscript: the next morning I decided to go out for a celebratory breakfast, and my choice of restaurant and time enabled me to enjoy the company of half of the Miracle on Ice hockey team, who had returned for the celebration.

*   The island, Hawk Island, is the small island closest to the camera in the featured picture.

15 Responses to There and Back Again