We all live in a yellow submarine, er… yellow bus by JeanZ
10
(15 Stories) 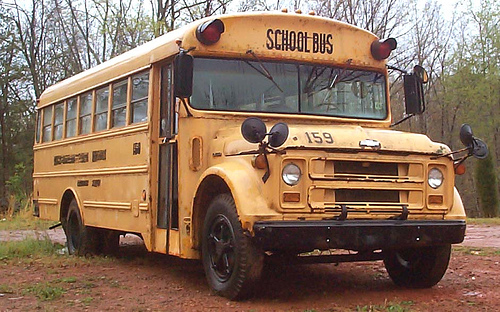 In the early years of our marriage we were students or post- docs and our friends were in similar positions. None of us had much stuff in our small apartments and moving days were an excuse for sharing the work and having a good party. My favorite memory of such a party involved a friend who was moving from Boston to Seattle. Karl was a post-doc with a PhD in engineering who had decided to go to medical school. His wife Sharon figured it was her turn to go back to get a master’s degree. Off they went with their two sons, ages 2 and 3.

Karl had discovered that Massachusetts required that school buses be retired from service after a much shorter time than Washington did and figured out a great profit-making opportunity —buy a retiring school bus before the move, use it to camp in and transport themselves and their worldly goods across the country, and then sell it for a profit. Along the way they were picking up a couple of young relatives for parts of the journey. Also, their route started from Boston to Nova Scotia to see the total eclipse of the sun (yeah, the one Carly Simon sang about in “You’re so vain”), then back into the USA to pick up one of the guests in St. Louis, then back into Canada for something they wanted to see, then finally to Seattle.

Moving day started with the assembled friends removing all but a few seats from the bus to make room for the furniture and other goods. Of course, the seats had to be saved so that the bus could be re-assembled for resale at the other end. The seats were strapped onto a makeshift carrier on the roof. I managed to avoid roof duty but friends reported that the roof was very slippery. Next came loading the furniture and cargo onto the bus, while also setting up beds and other necessities for the camping trip. All of this was done in a pretty sketchy neighborhood near Boston City Hospital.

The bus did not have a key and could not be opened from the outside once the door was closed. No problem — Karl found a solution, put one of the kids through a window and he would go to the door and open it from the inside. My husband and I enjoyed contemplating what would happen when the boys realized their power.

When the bus was finally loaded the whole crew got in to head for the first stage of the farewell party at our studio apartment in Cambridge. I do wonder how we got that many people in that small apartment, but the good times rolled until we all moved on to the second stage in another friend’s apartment. Driving the bus from one place to the next went straight through Harvard Square —a school bus loaded to the top of the interior with stuff and with seats strapped to the roof. During a period when weird sights were routine and generally accepted as normal in that spot, one of my best memories is of a Cambridge cop stopping his traffic directing to stare at us with his mouth hanging open.

Our friends made it to Seattle and reported that the only real problem was multiple flat tires. Who would expect a PhD engineer to consider the maximum weight load a school bus was designed for?

11 Responses to We all live in a yellow submarine, er… yellow bus