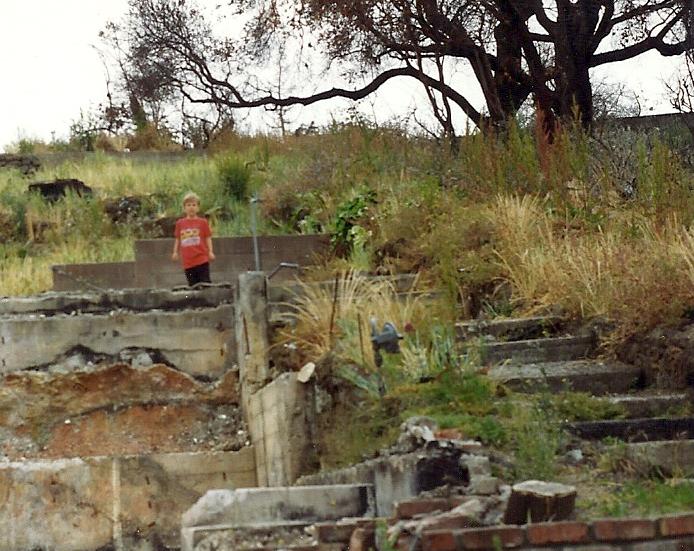 Excerpted from my memoir, There Was a Fire Here.

October 20, 1991. Oakland, California —
There was a fire here. It started high above our house, on a hill facing west. No one knows for certain how it started, but a human hand set something burning and started The Fire. The fire incinerated, it eliminated; it scorched, it singed; it destroyed, it killed. The fire sent black smoke miles into the sky, sent clouds of ash floating west to the sea. It created its own weather.

There was a fire here. It started on a Saturday afternoon in October, a day of college football in nearby Berkeley, where leaves in brilliant shades of orange and red fluttered to the sidewalks under a clear sky. On Saturday, we didn’t smell smoke, didn’t feel a hot wind blowing. But we heard the helicopters buzzing overhead, saw their propellers slicing the air. From their bellies, buckets swung on wire cables like pendulums, sloshing water as they flew, on their way to fight the blaze. The fire chief spoke on TV that Saturday evening; he reported that the fire was out. The sparks and embers had been extinguished. A disaster averted. Thank God. No fire.

But the next day, in the early hours of that warm Sunday morning, a northeasterly wind, an unseasonable force, fanned the dying embers, blew them hot into the air, to the tops of the eucalyptus trees and into the desiccated high brush covering the autumn brown hills above our houses and spread the flames. A hot, dry wind blowing from the wrong direction, a demonic force, the devil’s breath you cannot see makes trees sway, sparks fly and embers leap from treetop to treetop, bringing heat and fire; and the fire, snapping like a fingernail on a match head, raged through anything in its path—anything at all. Everything. 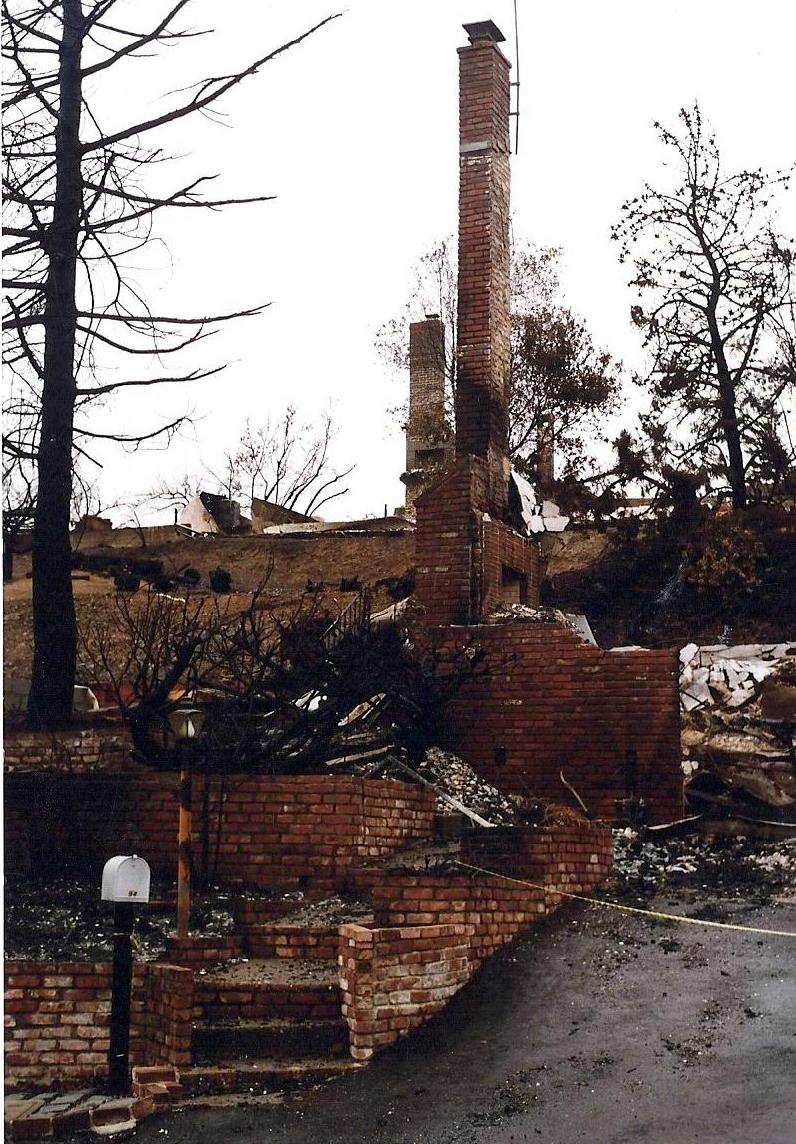 The fire leveled homes to their concrete foundations. It killed a teacher, a student, a grandmother, a fire battalion chief, a police officer; twenty-five men and women, young and old. It took the lives of dogs and cats trapped in their houses. It charred the habitats of deer, raccoon, skunk and possum. The mocking bird that serenaded from morning trees outside my window, hummingbirds with red throats that sipped from the flowers in my garden; the yellow finches, black crows and brown sparrows—all left homeless, with no eaves or branches for their nests. The fire destroyed the liquidambar tree in front of my house, the one that marked the seasons with its spring green, its fall orange, its winter black.

It robbed us of heirlooms and wedding presents, works of art, novels in progress, a lifetime of photographs; first-place trophies and blue ribbons, seashells and stuffed animals, secrets tucked away in boxes and under beds; letters, diplomas and yearbooks, dolls and toy trucks and baseballs, crayons, bicycles and report cards; blankets and pillows, mattresses and cribs, storybooks and night-lights, shoes and sweaters. It turned everything into ash and left the twisted metal skeletons of bed frames. 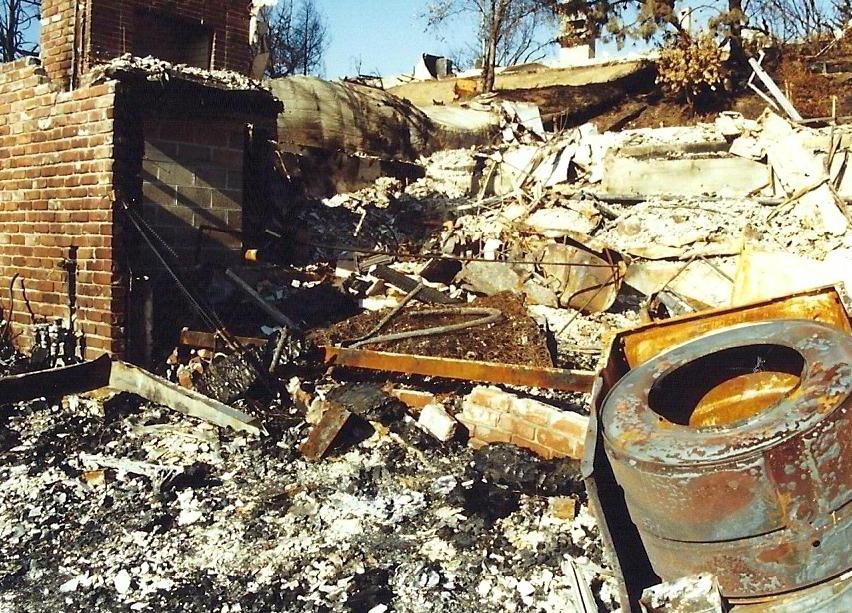 There was a fire here that firefighters couldn’t battle. It raced down narrow, crooked streets, outrunning people, animals, cars. No time to get out, no time to go back, no time to think. Firefighters rushed from far away, only to stand by, watching, helpless, holding hoses that didn’t fit hydrants—hoses rendered useless. Smoke filled their lungs, soot blackened their faces. The fire pressed them back, winds gusting, roaring and ripping over the trees and roofs; trees exploding into sparks and flames, roofs catching the sparks from trees, wooden shingles feeding the flames, windows bursting, shattered glass flying, houses collapsing onto themselves, imploding one floor, then another, then another, until they piled on their foundations like smashed layer cakes—splintered, ruined, unrecognizable. The extreme heat freed dormant seeds, waiting for decades for fire to set them loose from the trees. And blackened scarecrows were left to watch over a lonely landscape.

The fire jumped across eight lanes of one freeway and four lanes of another, careering down the hills, leaving nothing standing except red brick chimneys, garden walls, and steadfast barbecues meant to hold fire inside them. In the aftermath, a hardened swath of vile black stretched in all directions; hot sulfuric fumes permeated the air. Gone: our blue house, our pink roses, our wooden fences, our children’s tree house, our white front door. It is gone, beyond my concept of gone.

There was a fire here that wiped out not only things, not only people, but memories—a past with nothing left to mark its presence. The fire erased the acquisitions of a life together; a widow’s keepsakes, faded corsages and pressed bouquets. Holocaust survivors lost everything, again. Children lost neighbors who handed them candy on Halloween and delivered cookies at Christmas, who left Easter baskets on the doorstep and invited everyone up on the deck to watch fireworks on the 4th of July.

There was a fire. And then there was everything that happened after. When the fire stopped burning, when the rains came, when police removed the yellow tape barriers, when the neighbors returned to the death and destruction, we held onto each other and tried not to ask why, tried not to wonder what next, tried to imagine starting over.

There was a fire here that tore some families apart and pulled others closer together. Couples argued and blamed each other for leaving belongings behind. Marriages unraveled. Children accused their parents of allowing their homes to burn; they got angry when they learned there wasn’t a bad guy to catch and put in jail for starting the fire. People wrangled with authorities and insurance companies over the value of their property and the contents of their houses. Some found that they didn’t have enough insurance. No one told them, or they hadn’t paid attention. A curious shift occurred when the new houses went up: survivor guilt was supplanted by envy. The neighborhood became a dusty, noisy, lonely place to live, and even though it seemed like a lucky break at the time to have your house survive the fire, as the months went by and the big new houses got built, the tide turned against those who had been pitied before.

And as those new houses grew, with bigger rooms and all new things, did some of us feel the tiniest bit lucky to be starting fresh? Was being lucky part of a blessing or a curse? There was a fire here that divided a community: survivor, victim; lucky, unlucky; before and after. If you were here then, you will remember where the lines were drawn. But as time goes by, the lines grow fainter.

There is the before, and then there is the after. We forget which is which sometimes, even now, even when it’s been over twenty-five years. We stop when we look for things: Where’s that white tablecloth? Oh, yeah….

There was a fire here.

6 Responses to There Was a Fire Here

The End of the Innocence
by Suzy