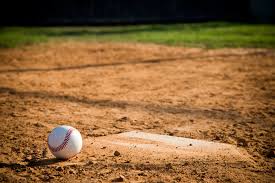 My best friend Nate Singelton, a wide receiver for the 49rs and I use to run around together a lot and are more like brothers than friends. One weekend after getting back from the driving range Nate asked me if I had a baseball mitt he could use. I asked, “Why in the world would you want to borrow a mitt from me when just last week I saw about 10 brand new mitts in your closet?” He told me some of them were girls mitts and most of them were softball mitts and besides he wanted a mitt that was well broken in. I asked what he needed it for and he told me the Niners were going to play a 3 inning exhibition game against the Giants the following week and so he needed a good mitt. I went into my den and found my “Old faithful” and brought it out and laughed as I said, “Believe me, you don’t want to use this mitt. I have had it since high school and it has a million miles on it.” As I showed him my battle scarred, floppy old mitt. To my surprise he says, “That’s perfect Bro. Let me have it.” I laughed at the thought of my mit being used at Candlestick Park by a pro football star let alone against the San Francisco Giants. He slid it on and slapped it a few times and said it was fine. 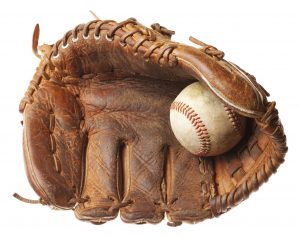 That following week I did not get to go to that game because I was out of town so when I got back I asked Nate how it went. He said, “It was prefect. I told you it would be fine and we almost beat the Giants too!” “Really!” I asked. “But there was this one thing that happened.” Nate said. “When we went back into the dugout after our exhibition game was over so the Giants could get on with their game against the team they were playing that day, I was talking to one of the players and Berry Bonds picked up your mitt and put it on. Then he was laughing and asked me, “Hey Singelton, don’t those Niners pay you enough to buy a new mitt? So we were talking for quite a while about things while Bonds had your mitt on.” I took my mitt and put it on and said, “You mean to tell me Bonds had on MY mitt, this very mitt! Did you have him sign it?” Nate laughed and said, “Hey Bro, he didn’t ask me for my autograph and I sure as heck wasn’t going to ask him for his. What was I going to say, “It’s for a friend of mine since I borrowed his mitt? Right.” So to this day when I slid on old faithful I am the only guy (besides Nate) that knows Bonds wore it. Can you hear me with that old ragged mitt telling someone… “Yeah, One day Bonds had my mitt on and…..”

Another one of my favorite baseball memories was growing up in the small coastal town of Bandon Oregon so I never really had a team? I really didn’t know who players were, even when I saw them and didn’t know stats and so on. Well, when I was a young adventuresome guy I came to Palo Alto to further my education and I was working part time in a service station. On several occasions, I had worked on some pretty nice cars for a man that was a friend of my boss. His title was “troubleshooter” and he worked for Chrysler. He would bring in cars to be serviced because he was and old friend and enjoyed doing business with my boss. One of his jobs was to take care of and maintain cars that Chrysler had given to celebrities. One day I was working on a couple of cars that he had brought in before only this time he told me the owners would pick them up when there were ready. Both cars were brand new Chrysler New Yorkers and they were pink with white vinyl tops and upholstery. And listen to this…. They had phones in them but remember this happened way back in 1970! As I continued working on the car, changing the oil and checking everything the owners of the cars came in and as one of them took the keys and left with his the other guy politely said, “Hello, I see the car is not quite ready.” I told him it wouldn’t be much longer but he could talk to me in the shop while I got it ready. It was a cold rainy day and the guy asked, “Hey, do they have hot chocolate over at that restaurant across the street?” When we confirmed they did he went and got a cup for him and one for me. I remember he was a really nice guy and we talked about cars, the weather and so on until his car was all done and he was ready to go. I thanked him for the cocoa and he left. As he was driving away one of my coworkers was watching him leave and he said something strange. That’s when one of the other employees said, “I sure wish I had a nickel for every ball he hit.” Not wanting to feel stupid I just said something like, “Oh yeah…… me too.” Then my coworker said, “You gotta be kidding me… Don’t you know who that was that you were talking to. Don’t tell me you don’t know who the guy that bought you the hot chocolate!” Finally, I gave in and admitted I was not sure who they were and by now all the guys that worked there were grilling me. They asked, “When you checked the spare tire air pressure in the trunk and had to move all the baseball bats, balls and jerseys didn’t you have a clue?” I shook my head no. Then my boss said, “You gotta be kidding. Didn’t the personalized license plate give you a clue?” I went and looked at the invoice to see the license plate. One was “SAY HEY” and the other one was “MAC 44”. And believe it or not they almost fell over backwards when I asked, “What does Say Hey mean and what is Mac 44?” I almost fainted when they told me the man that took his car was Willie Mays and the man that bought me the hot chocolate was Willie McCovey. 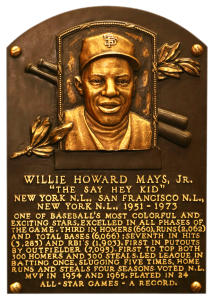 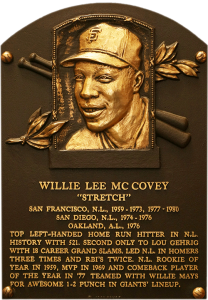 When nobody was looking I dove into the trashcan and retrieved my crumpled paper cup from the hot chocolate and still have it to this day.

2 Responses to Two For The Price Of One