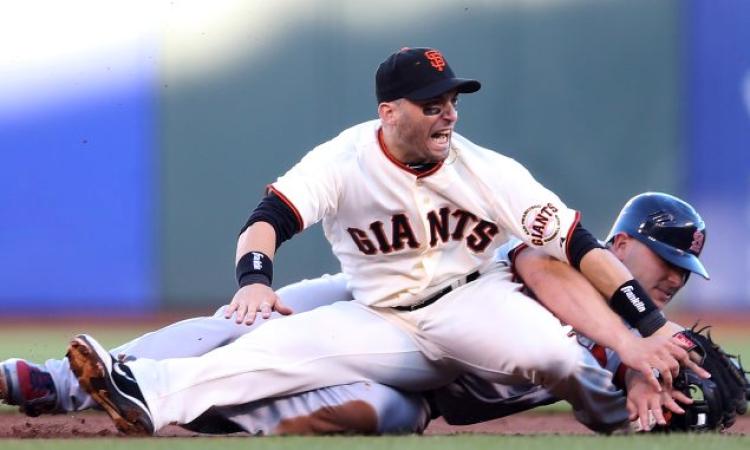 The fact that I am woman of a certain age makes it easier to understand why I never played baseball as a child. I think I would have loved playing growing up, in a sand lot, the way my husband did, but that game is way way over. Our son played Little League for many years, an experience that turned me into a serious fan. (You can listen to me read a poem about the mom-fan years here — last name starts with a B.) Then the San Francisco Giants won the World Series in 2010 and I thought I would lose my mind. Where had I been all my life? Not watching this game that clearly is the best and most fun thing ever.

The first winning season I’m sure there was a second baseman somewhere, but you really couldn’t see much past the pitching that year. Oh Timmy, we hardly knew you.

During the Giant’s second winning season (2012), Marco Scutaro turned me into a Second Baseman Woman. You’ve heard men refer to a man who likes to look at a woman’s legs as “a leg man,” and one who prefers to watch a woman’s wonderful and strong rear end as “an ass man” right?  Well this is like that. I like men who play second base. (And if you are thinking about other kinds of first and second bases, well, that’s not entirely wrong, but not the point of this story!) The agility, the speed, the twisting and unexpected lightning turns in mid air! The jumps and leaps and impossible lunges across the indefinite space between second and first base, not to mention that sexy infield shift move, or all the times they get stepped on defending a steal from first. How many other players routinely get cleats in their shins?? I mean, com’on. And the way they get their uniforms completely dirty from rolling around on top of each other… moan… 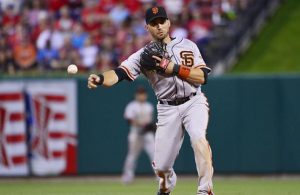 Marco Scutaro was my hero of the 2012 season ’cause he was old (for a major league player) and he could crush the ball with RISP and he was just all around awesome with his slightly scruffy chin and soulful eyes. If you watched the last game of the NLCS, you’ll never forget him standing on the field when it was over in the pouring rain like an avenging and very dirty angel.

But he’s retired now, gone the way of many second basemen who wreck their backs with all that twisting and lunging. Thankfully the Giants have Joe Panik, or Joe Baby Panik, as I like to call him, who would be my favorite player these days if it weren’t for Hunter Honey Pence, as I like to call him, or Twitchy Pants when he’s on a roll. And even if Joe is sometimes benched when his back acts up (remember the leaping and sprawling?) there’s the almost more adorable Kelby Tomlinson (think Clark Kent). Here they are, doing some awesome second basemen things. 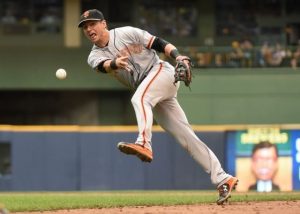 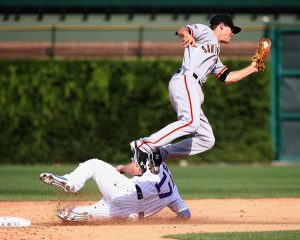 Kelby Tomlinson avoiding the cleats and still making the catch

My son never played second base much. He was a catcher and an outfielder. That’s probably just as well. I don’t think it’s healthy for moms to lust after their sons the way I lust after the men who play second base. Oh my.

5 Responses to A Second Baseman Woman