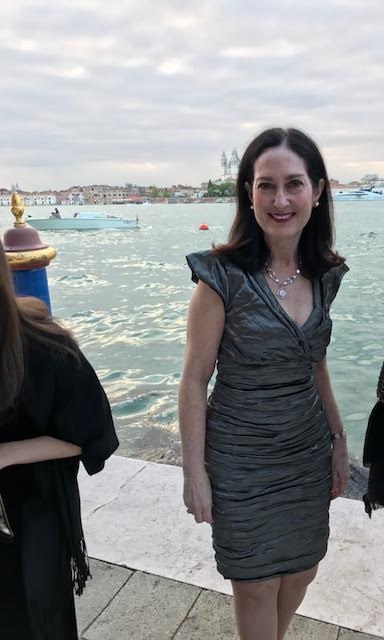 The Venice Biennale began in 1895, making it the oldest and most important art fair in the world. It showcases contemporary art from across the globe for six months every other year. Twenty nine countries like the U.S., France, Germany and Canada have Pavilions that have stood in the Giardini, once a large park, since the 1920s or ’30s. But other countries seek space scattered around Venice, which becomes a large art gallery for the duration. Millions of people will flock to this destination to see what’s current in the art world. Artists compete to be chosen to represent their countries. In April, 2016, we found out that the Rose Art Museum at Brandeis University had been chosen by the U.S. State Department to be the Commissioner of the U.S. Pavilion. Our director, Chris Bedford was to curate and the artist would be the LA-based MacArthur prize-winning Mark Bradford.

I have been active at the Rose for 27 years and on its Board of Advisors for 18, so going to the Biennale as the host of the U.S. Pavilion was a once-in-a-lifetime opportunity that I could not pass up. I have just returned from that trip and it was glorious. Since being awarded the prize, our director moved on to head the Baltimore Museum of Art, so we co-chaired the Pavilion, but it was still a great honor and an amazing week.

The Provost from Brandeis, as well as all of the professional staff and several art history professors planned a full program to take us through the wonders of the Biennale, which opened for VIP viewing on May 10. In addition to the country pavilions, there are also two large, curated spaces with invited artists from around the globe. The Rose curators helped us interpret much of what we were seeing, as it was all new. We had talks from the curator or artists from the Israeli Pavilion, Polish, Canadian, Chinese, South African, Iraqi. Much of the work was about identity and dislocation, even referring directly to the world-wide immigration crises. And of course, we talked at length with Mark Bradford at our pavilion. The title is “Tomorrow is Another Day”. Many of us thought of Scarlet O’Hara, but Mark said he meant that no matter how you feel today, you can always look to tomorrow to better times. He mixed Greek mythology with a call to moving to better times tomorrow. His work is abstract, using colorful wet paper, which is applied in multiple layers. He then scrapes away with a sanding tool and sometimes applies paint. He is tall, friendly and amazingly articulate. As a child, he worked in his mother’s hair salon in South Central LA and says he learned to work with wet paper there.

On my own, I went into many more national pavilions and with others, went through the large, curated areas as well. It was overwhelming…too much to take in all at once. In addition to the space in the Giardini, a huge space called the Arsenale (once, indeed, the place where ammunition was manufactured) was the other location full of artists.

One artist whose work I found particularly moving was Lee Ming Wei, Taiwanese-born, living in Paris. His work always has a performance aspect to it. Our interim director has worked with him, described the piece in this show, then brought our group to speak with him at length. She described the piece at the Biennale: a man sat a long table repairing a hole in a piece of clothing. He carefully picked several colored threads, sewed the hole. By doing so, he repaired the damage to the person to whom the garment belonged. The garment was carefully folded and stacked in a pile at the end of the table. A thread from the stitch remained, and was pulled out to a bolt of the colorful thread, now attached to a wall, like a fine spider silk. This was repeated over and over again. A tag, bearing the name of the owner of the garment, was visible on each garment in the growing stack. The thought that this simple sewing gesture could heal a person’s wounds moved me to tears. We talked at length with the artist, a quiet, soulful man. I could see how people would be drawn to him and art can move people.

The German Pavilion won the Golden Lion (top prize). Though I had walked through the pavilion, it, also, was a performance and the lines had been too long to wait and see the performance, but I had seen aspects of it, since we had lunch on the side steps one day. The inside was all glass, with a raised floor, difficult to walk on (slippery) and two Dobermans kept penned up underneath, with access to a run outside. From the floor above, one could see the food and water bowls. It was clear the dogs were trained to patrol and growl. I saw one of the performers in costume, with long, braided hair, pinned up, a leather suit, lots of harsh make-up. From what I heard, the performance included vaguely sexual acts in the midst of the crowd, provoking the dogs, and the couple being under the floor with the dogs. I couldn’t believe they won the top prize, but everyone was lining up to see them and buzzing about them. To me, it felt like Wiemar Germany…but perhaps that does reflect the state of things today.

For those who arrived on Monday, May 8 (and many of us did, as a full day of art-viewing before the Biennale had been arranged for Tuesday), a lovely group meal was arranged (we all paid for ourselves; Brandeis cannot foot the bill for any of this). It was fun and festive. I stayed at a small hotel on the Grand Canal next to where many of the others stayed. Good location, less expensive. A group lunch on the water was even better the next day. Dinner was on our own on Tuesday, so a group of six of us found a lovely spot outside of San Marco (the plaza in front of St Mark’s Cathedral, the central spot in all of Venice, renown for its beauty). The others were all Brandeis Trustees about my age, as well as the Provost; a fascinating group to dine with.

Wednesday night was the gala; a black-tie event, underwritten by our Board chair and a wealthy patron from Baltimore at the Cipriani, one of the fanciest spots in Venice. We took a private water taxi across the canal to their private dock. It was a beautiful night, a beautiful crowd and the most gorgeous event I have ever attended. Cocktails were served outside, where we mingled and enjoyed the view. Then the doors opened and we all gasped. Venetian chandeliers hung over exquisite tables, done “just so”. Welcome speeches by Chris Bedford, Provost Lisa Lynch and Mark Bradford, toasts to the success of the endeavor, lovely food, and after, a wild disco with live music and dancing. In addition to the singer, two dancers shaking “booty” like I’ve never seen. A different cultural experience. Finally we ferried back to our respective hotels. I felt like I had been the belle of the ball. 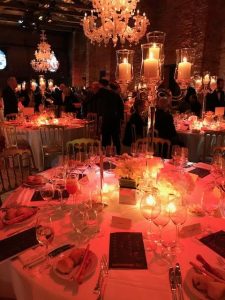 Thursday and Friday were filled with more art viewing and curator talks. We also visited the pop-up shop Mark set-up in conjunction with a Venice non-profit, Rio Tera. Part of his mission is social justice. He has his own project in LA, and the State Department requires it of its artists. Mark worked with prisoners to help them use sustainable materials to make handbags and cosmetics which were sold at this store. The proceeds benefit the non-profit, which helps the prisoners, gives them usable skills as well as helping them re-integrate back into society. This will continue for six years.

Friday night was capped off with a cocktail party at the Peggy Guggenheim Collection, Peggy’s famous private home, now a museum, also on the Grand Canal, filled with her fabulous modern art collection. The party was held in the courtyard. Though the forecast all day called for rain, we were again lucky, and it held off. Hundreds of people packed in to again celebrate Mark and Chris. During the celebration, we got the email announcing the new Rose director, completing the year’s cycle. I walked back to my hotel alone, looking across the Grand Canal as I crossed the bridge back toward San Marco, thinking about my wonderful week. The light in Venice is so amazing at any time of day. It is no wonder that artists through the ages have come to Venice to paint or write, inspired by her beauty. It was the trip of a lifetime. 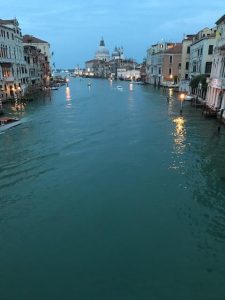