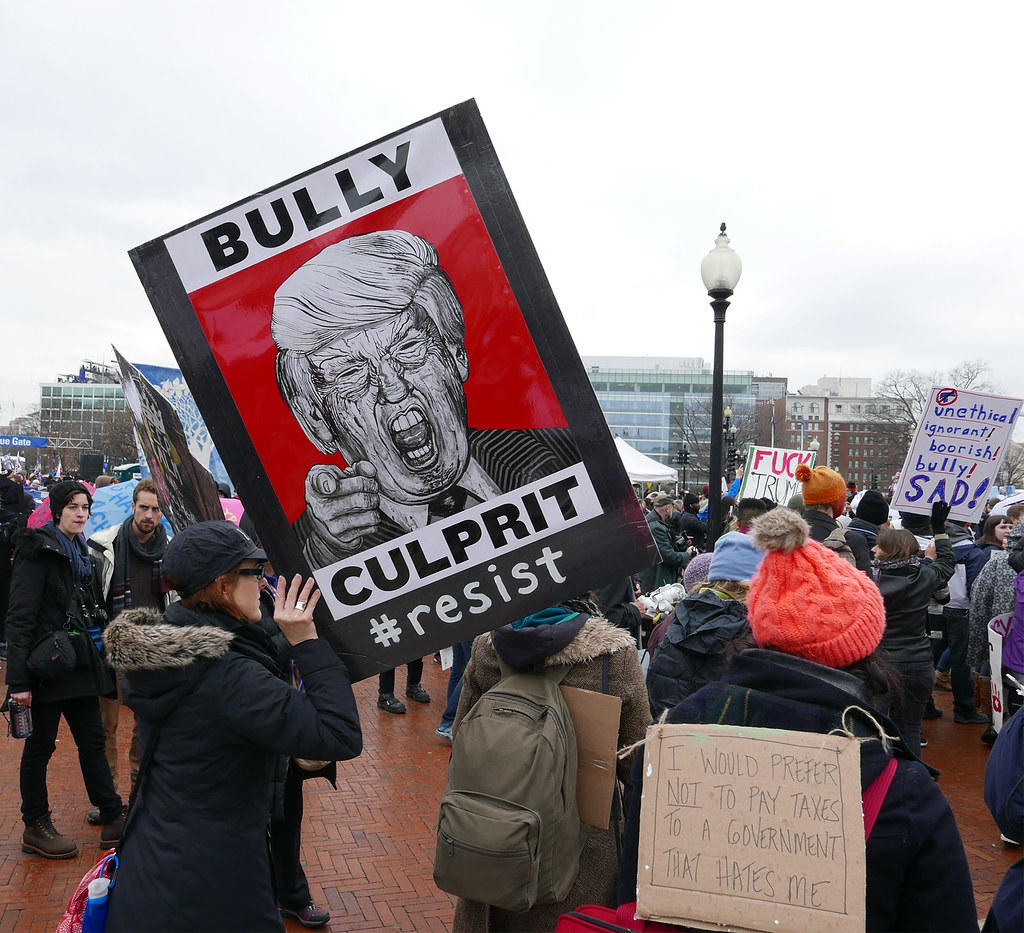 This is not the world I had hoped my grandchildren would inherit. Before Trump’s campaign and election, I truly thought our country was on track to be more loving, accepting, inclusive, and kind. Instead, during Bullying Prevention Month back in October of 2016, people were talking about a child with special needs in Texas being set on fire by classmates, who had taunted him in the past. While it is not clear if ten-year-old Kayden Culp, a disabled child who has a hearing impairment and speaks with a lisp, was deliberately or accidentally set on fire, the boy had been the target of bullying.

I want to put my grandkids in a bubble to keep them from seeing all of the hatred and bullying out there since Trump descended that golden escalator.

That same month, Trump imitated Hillary Clinton’s pneumonia-induced collapse and then invited women who had accused Bill Clinton of sexual harassment to the October 10 debate, during which he stalked Hillary, looming menacingly behind her as she spoke. The Access Hollywood tape in which Trump joked about his attempt to seduce a married woman and bragged he could assault women due to his star status had surfaced. Like a schoolyard bully, Trump decided to hit back, humiliate, and intimidate his opponent.

Fast forward to October 2019 and now this man who makes vulgar remarks, bullies his opponents, and feels entitled to sexually assault women is president. Trump’s cruelties, lies, and bullying are too numerous to mention. Taking their cue from him, supporters like Laura Ingraham have bullied Parkland massacre survivor David Hogg and, more recently, Lt. Col. Alexander Vindman, the decorated army veteran who testified at the impeachment inquiry hearing.

I want to put my grandkids in a bubble to keep them from seeing all of the hatred and bullying out there since Trump descended that golden escalator.

I worked hard in my thirty-year professional career as an early childhood educator to create a caring and respectful community for young children. Let me share what we taught the students at Cherry Preschool, the program I founded and directed:

When we sent our students out into the world of elementary school, we believed we had equipped them to be “playground ambassadors,” spreading the values they had learned and standing up for others. Instead, they are being taught that we live in a cruel world filled with countless examples of hate-filled bullying. That’s not the world I dreamed of over 25 years ago when Cherry Preschool was created. It’s not what I hoped for when President Obama was elected in 2008 and again in 2012. In both elections, his opponents did not reflect my political views, but they were honorable men whom I would have respected had they been elected.

I guess I should have seen this shift in America’s political climate coming. Much like someone who thinks she can ride out the storm during a hurricane, I dismissed Sarah Palin as a joke and thought the birthers were a small and ridiculous group of racists led by a small-minded and ridiculous celebrity. I thought the acceptance of marriage equality, the importance of battling racial and economic injustice, and the recognition of the importance of climate change and gun reform were on the horizon. Instead, the hurricane of bullying and hatred has destroyed my safe haven. I am left worrying if this is a storm I can survive. More importantly, I am left in despair about my grandchildren’s future.

10 Responses to When Hated-Filled Bullying Replaces Hope and Change