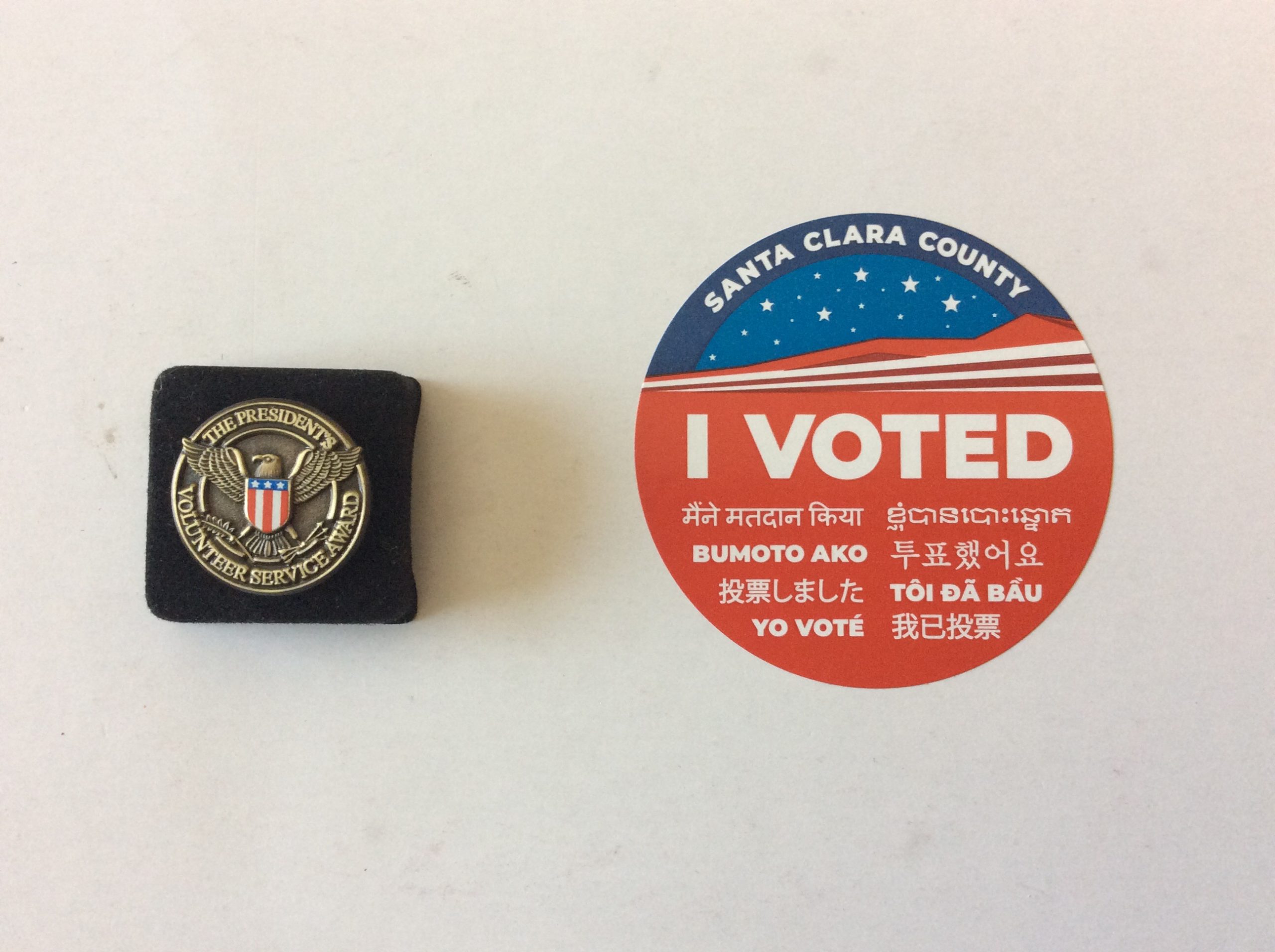 My association with buttons, pins, etc. is thin.  It starts with my memory of my father’s Stevenson button, then my Gene McCarthy button, and finally my “I Voted” sticker today.

I describe a few buttons and tokens from my past, and today’s sticker, “I Voted”.

As a boy, I remember my father’s Adlai Stevenson button.  Dad was an engineer at Boeing in 1956 and Eisenhower was running for reelection against Stevenson.  I asked if he thought Stevenson would win, and he said it was unlikely.  I imagine that he was one of the few engineers at Boeing that voted for Stevenson.  Many years later, when I worked for Lockheed, I could understand how engineers vote, especially since I was at Lockheed when both of the GHW and GW Bush ran for president.

In 1968, I was a freshman in college.  With the Vietnam War at its peak, and no credible candidate running against Johnson to oppose the war, Eugene McCarthy stepped up to the challenge.  Even Robert Kennedy refused to run.  McCarthy’s victory in the New Hampshire primary ignited many people’s involvement in politics, including mine.  While I was too young to vote (18), I started campaigning for McCarthy.  Buttons, posters, etc.  California’s primary election night  was a disaster for America.  Robert Kennedy, who had belated entered the race, won, then got assassinated.  Hubert Humphrey finally ended up with the nomination, even though he did not run in any primary elections.  I did a little for George McGovern in 1972 (another loss).

In 1970, I decided to do some volunteer work for some local candidates for congressional offices.  I could not vote for them in the primary election since I was only 20, but I turned 21 by the general election and could finally vote.  It was another disappointing loss.  After that, I limited myself to local politics with the exception of McGovern in 1972.  As a side note, if proposition 18 on this year’s California ballot passes, I could have voted in both the primary and general election of 1970.

In the years past 1970, I have done work for local candidates and issues.  The candidates I have worked for, I have known personally.  For issues, they have been matters I have felt important to me such as nuclear power safety.

The other buttons in my collection are from various organizations that I have done work for their efforts.  Included are the American Cancer Society, Kiwanis, youth sports, Toastmasters, etc.

Finally, these are the two latest buttons that are important to me.  I received “The President’s Volunteer Service Award”. Fortunately, it was from President Obama.  The other one I will receive today, “I Voted”.  I hope it helps retire  the current resident in the White House, a man that does not respect people, has no understanding of public health or economics and despises the US Constitution.  Hopefully, happy days are ahead.

Tags: Buttons Tokens McCarthy
Characterizations: been there, moving, right on!

5 Responses to A Few Small Tokens and Buttons