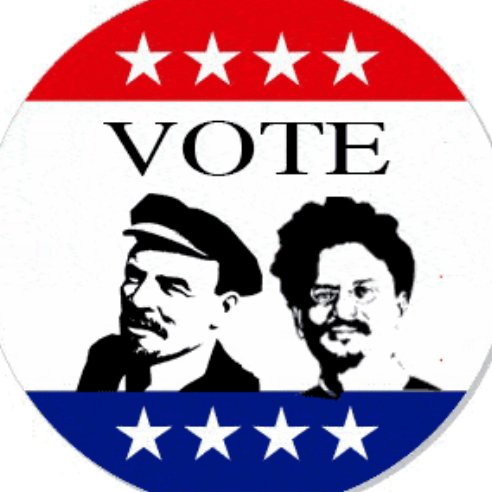 Not the same button that Joey wore–but these are the same faces his button sported, and that triggered my Grandma.

The first button I associate with Joey during his college years bore the slogan, “Grinnell Sucks.” But that’s not the button I want to discuss.

I knew Grandma Geitel as a seamstress, a maker of chicken soup with knaidelach, someone who drank hot tea in a glass with sugar cubes, and someone who liked to gossip about her eight sisters and their lives and times.

Joey was one year ahead of me in school, same as my brother Leon. There was a loose-knit group of boys, mostly Jewish and all in my brother’s grade, whom I thought of as “the intellectuals” during my late adolescence on the north side of Indianapolis. Their “brand” (as today’s youth would call it) included academic success, support for civil rights, anti-authoritarianism, and an interest in arts and films that were as far as possible from the run-of-the-mill fare favored by more typical Hoosiers. They weren’t that into the Beatles, for example, during the early “She Loves You” days. But once Lennon and McCartney began crafting deeper lyrics and more complex melodies—Rubber Soul!—they could sit around and analyze it to their hearts’ content. They would rather go to an obscure foreign film, the kind that were shown in a one-screen theatre in an edgy part of town, than to the mainstream commercial movie theaters with their beckoning candy counters and their safe and well-lit parking lots.

They left for college in 1966—all choosing to study outside the state of Indiana. It was fun times when they would get back together during their college years, and our home—with my mom always ready to dice up some apples, roll out some dough, fleck in some bits of butter and put a strudel in the oven–tended to be the favored spot to reconvene. It was at one of these gatherings, probably during the very first Christmas break of their freshman year, that Joey was sporting the “Grinnell Sucks” button.  Not that he didn’t like Grinnell, a liberal arts college in Iowa: I think the button was just part of the continuing anti-authoritarian posture.

It would be a couple years later, during a similar informal mini-gathering at our house, that Joey would wear the button I want to discuss. But to appreciate why it was important, and why it still sticks in my mind, you have to know about my maternal grandparents.

Grandma was the youngest of nine sisters who arrived with her parents in Toronto, Canada, from Russia, at the age of five. Grandpa arrived on his own in New York City from Lithuania (which was also part of the Czarist empire) at the age of 17. Eventually, they would meet in Toledo, Ohio, and marry. My mother was the second of four children and the only girl.

Grandma worked on sewing machines in factories when she was younger, but by the time I knew her, she was a self-employed dressmaker, taking in sewing work at home. Grandpa was a “junk dealer” who had a truck when I knew him but had begun plying his trade with a horse and cart. Factories would pay him a fee to pick up excess or waste material off their shipping docks, and he would seek buyers to whom he would resell the material. Each time we visited Toledo from neighboring Indiana, we came home with piles and lengths of scrap fabric, so I guess some of his customers must have been clothing factories.

More germane to the story of Joey and his button than the way they made their living was that Grandpa and Grandma believed in Revolution. Not just the Russian Revolution in their native lands, which took place after they each emigrated, but the worldwide and universal concept of revolution. Until the day that Grandma spoke up about Joey’s button, however, I had never heard her identify with this part of her past. I knew from my mother that they had a framed photo of Lenin (of Russian Revolution fame) on the piano, and that she found herself in an uncomfortable position when she was asked to vote in her elementary school’s mock Presidential election. That was because William Z. Foster, the Communist candidate her parents supported, was not included on the school’s version of the ballot. My mother had also told us proudly that when she was about ten, her parents took her to rallies to “Free the Scottsboro Boys,” nine African American teenagers, ages 13 to 19, accused in Alabama of raping two white women on a freight train. The young men turned out to be innocent victims of falsified testimony but most served at least six years and several considerably longer. At the time, the defendants had few allies besides the adherents of the Communist Party, USA.

Grandpa made his perspective plain. When our family visited Toledo in the summer of 1967, before I left for my first semester of college, he was eager to show us the evidence of the recent black community uprising that had taken place in July. This was the same summer that nearby Detroit and over 100 other urban areas experienced similar events. The violence had not left him with the fears that were so prevalent among so many other white people after these uprisings. Instead he seemed animated. He drove us around and showed us some properties that had been damaged and said, “they got to throw a lot more rocks and bottles.” He recounted how, back in Russia, there were different perspectives toward change. In his thick accent, he explained that for some people it was all about “just get rid of the Czar.” But then the people did “push out the Czar” and that left them with a “fellow named Kerensky.”  And the problem was, if they didn’t “push out Kerensky,” it would “go back.” Because the real problem was “the profit system.” It was important to go all the way, to put an end to the profit system–to have a revolution. And that kind of thinking, he implied, was what Black people in the United States would need, if they truly wanted to attain equality. “They got to throw a lot more rocks and bottles.”

I never heard any such talk from Grandma Geitel (Gertie to those who Americanized her name). I knew her as a seamstress, a maker of chicken soup with knaidelach, someone who drank hot tea in a glass with sugar cubes, and someone who liked to gossip about her eight sisters and their lives and times.

When the members of my brother’s circle gathered at our home during what was probably their senior year of college, Grandma and Grandpa happened to be staying with us. Joey, it turns out, had become active in the Young Socialist Alliance, the youth branch of the Socialist Workers Party, whose members viewed themselves as followers of Trotsky. On his lapel, he was wearing a button bearing the name of the party and the faces of both Trotsky and Lenin. I introduced him to my grandparents, and he proceeded to mingle with my brother and the other guests. Grandma and Grandpa were perfectly courteous, mainly leaving the young guests to interact with each other—and to indulge in the roast beef, the strudel, sides of olives, and the cookies that mom was likely to have provided.

But when Joey and the others left—boy, did I hear a mouthful from Grandma!  “Did you see what he had on his button? I didn’t want to be rude so I didn’t say nothing.” You mean the button for his political organization? What was wrong with it? “Have you ever seen something so crazy?” What do you mean, Grandma? “Lenin, with Trotsky? That’s like if I’m putting a picture of Moses on a button, and then somebody puts—I don’t know, Jesus! They don’t match up!” (A reader needs to understand that in the mind of someone Jewish, even someone like my Grandma who was unaffiliated with a synagogue, Jesus is definitely the one—like Trotsky–who didn’t “match up!”) 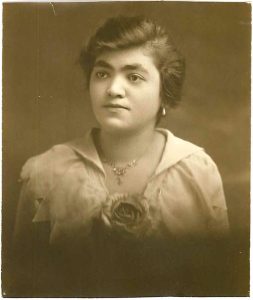 My Grandma Geitel as a young woman

Later I would learn that Grandma had been a fiery street-corner speaker at the age of sixteen (in Yiddish), and authored a dozen or more articles in the local Yiddish-language Communist newspaper–about working conditions, organizing drives, and strikes in Toledo and the surrounding areas.  But she had long submerged these past activities well below the surface of her daily life. I am thankful that for a few precious moments, I got to witness the flash and fire of my grandma, the young activist and ideologue! It was entirely thanks to Joey’s button.