Prompted By Lemons to Lemonade
19 comments.

In February 2014, I was driving my father back from the oncologist’s office, interpreting what he had said, and it wasn’t good.  We had known there was a low-grade anemia and unusual cells.  Now the bone marrow confirmed it—he had AML (acute myelogenous leukemia).  I tried to explain how the abnormal white blood cells would crowd out the others.  This was fatal.  At age 92, there was no treatment for him; usually the end would come from some infection his blood cells could no longer fight off. When?  Maybe a month or two, max.  Maybe tomorrow.  No one knew.

At age 92, there was no treatment for him; usually the end would come from some infection his blood cells could no longer fight off. When?  Maybe a month or two, max.  Maybe tomorrow.  No one knew. He got very quiet and then said, “Oh.  I guess I had better make some phone calls.”

He got very quiet and then said, “Oh.  I guess I had better make some phone calls.”

It was serendipity that I was even there—a medical conference had brought me from western Canada to Washington DC, and I had added on some time to visit family.  Now this.  My job? Trying to help him have a good death.

Fortunately, he lived in a continuing care community (CCC)in Chestertown, Maryland, not too distant from my two sisters in Bethesda.  My mother had been the impetus for the move 25 years earlier, because she was worried about dementia (her father), and being a burden on the family.  As feared, she did develop Alzheimer’s and ultimately moved from the cottage, where they lived independently, into the care wing. My father visited every day, despairing at not being able to somehow reconnect with the woman he knew and loved, and he wouldn’t travel without her. She was now three years dead.

My father was still independent and sharp however.  He had unexpectedly found a new love. “Mike” who was also recently widowed, and been part of a book club some years back with my mother; she liked Mike, which was rare praise. My dad liked her too, and so did I and my sisters.  She was warm, generous, funny, realistic, and made my father happy. With his help, she had moved into an apartment in the same care community.

Now I was staying in the extra bedroom of the cottage with my father, got coverage for work for a few weeks, was unsure how the next steps would unfold.  He got organized.

First the phone calls.  In the past year, he had been persuaded to finally pull together an old draft of the story of how he met my mother in China during the revolution, and, with some help from a close family friend, got it self-published.  The final product, “China Story”, complete with binding, pictures, and even a library of Congress number, had just arrived around Christmas.  He had sent it to friends and family, who gave him lots of positive feedback and letters.  I am biased, but it really was quite good. 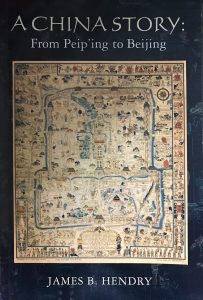 He got out his old address book of contacts, many of whom had gotten recent copies of his book.  Together we pored over the tattered pages and scrawled names, crossing out the ones who had died. From the next room, I could hear him.   “Marie?  Hi, it’s Jim.  I’m just calling to let you know I have been told I have cancer and won’t live very long.  I wanted to say how much our friendship has meant, and to say goodbye.”  How could he do that?  Even now, my eyes tear up as I write those words.  And yet he did, he said goodbye to everyone.

He stopped by the social worker’s office at the CCC to update them, and register his request for hospice services.  He met with his family doctor, and medications were adjusted.  He could have wine again.  Daily croissants for breakfast.

He took care of business.  I chauffeured him to the bank, the lawyer, the accountant, the funeral home as he made sure affairs were in order as much as he could.  Mostly I was weeping, while he was the strong one having the necessary frank conversations.  Maybe it helped give him some measure of control, but I was in awe.

He couldn’t decide if he should get a haircut or get his toenails cut—why bother? But why not?  So he had what was sure to be the last one.

My sisters came to visit, and we spent hours going through old photographs and labeling them, listening to playlists on Pandora, pulling out the iPad and googling people and places from years ago.  So that’s what became of him or her!  Look at that how that city has changed since we were there!  We immersed ourselves in memories, and he seemed content just having family with him now.

We had dinners with Mike, ate out at restaurants.  Arranged for a grandson to get the car he could no longer drive. 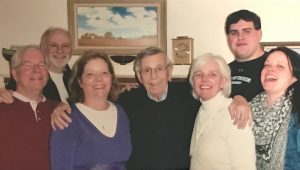 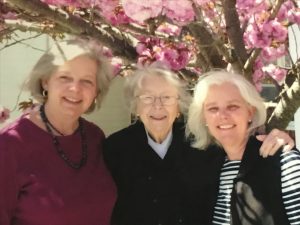 We went to the hospital for blood draws and transfusions until it didn’t seem to help the weakness any more.  He fell one day and got a walker. It was very unreal; he knew he was dying but was somehow still here.  He fretted about what the actual dying would be like, and hoped he would be like his uncle, who just didn’t wake up one morning.

I couldn’t take any more time off and had to return to work, but figured out a way to return in a couple of weeks.  My sisters would take turns staying with him, monitoring the medication charts, cooking, being there.  The night before I left, as we hugged each other I said, “I wish I could hold onto you and keep you here with us forever.”  “I wish you could too.”  Would we see each other ever again?

While I was gone, he became too weak to manage at home, and had to be transferred to the care wing, which is I found him on my return.  We had continued to be sure at least one sister was staying at the cottage and visiting daily. He spent hours rereading his book, and the letters he had received from his friends.  It was now Easter, and everyone gathered together on a beautiful spring day—sisters, spouses, grandkids, Mike.

A few days later, almost exactly two months after his diagnosis, I went to see him in the morning and he was gasping for air.  It was clear he was dying. All the sisters assembled, and we scrambled to get hospice to provide supports.  After a difficult day, the oldest sister finally told him that he had provided for us well, we would all be fine, we loved him, and it was okay to leave.  Through a fog, he said he loved us. While we took a break and Mike sat with him, he quietly died.

It wasn’t a perfect death, if there is such a thing, but we felt lucky to have had such good time together to prepare and celebrate.  He had completed his story and closed the book.

19 Responses to A Good Death

Love, baseball, and literature in a time of cancer
by Dale Borman Fink

The Fruit Stand of Love
by Dave Ventre

Some Pandemic-Flavored Lemonade
by Laurie Levy