People rarely believe me when I say I started out as a Criminology major, but it’s true.

"Notably the Berkeley School of Criminology was targeted by key players in the US military-industrial complex such as Ronald Reagan himself, then Governor of California and Regent of UC-Berkeley."

I have a copy of my undergraduate transcript with all the classes right there: Protest, Politics and Crime;Organized Crime, The Correctional System, Etiology of Crime, Field Study (during which I volunteered with a bunch of kids in foster care),Sex and Crime, Social Perspectives on Crime. And then, it all stops. No more Crim classes. Why? A simple reason:the school was deemed too radical. For Berkeley. 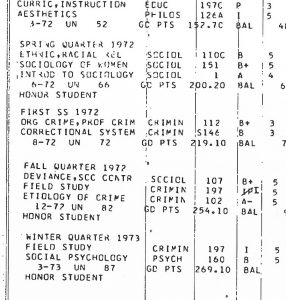 “The Berkeley School of Criminology stands, to this day, as one of the most significant developments in criminological thought and action. Its diverse participants, students and faculty, were true innovators, producing radical social analyses (getting to the roots causes) of institutions of criminal justice as part of broader relations of inequality, injustice, exploitation, patriarchy, and white supremacy within capitalist societies. Even more they situated criminology as an active part of opposition to these social institutions and the relations of harm they uphold. Their criminology was directly engaged in, and connected with, the struggles of resistance that emerged in the late 1960s and early 1970s. Not surprisingly perhaps, they became a target of regressive and reactionary forces that sought to quiet those struggles. Notably the Berkeley School of Criminology was targeted by key players in the US military-industrial complex such as Ronald Reagan himself, then Governor of California and Regent of UC-Berkeley.”

While I didn’t know all the details at the time, things started to go amiss right around the time I got there in 1968-69.

I am no longer sure about what drew me to this major, but I thought learning about these things would be a way to make a difference.Plus, the class on organized crime was fascinating. My father was appalled at my choice, insisting that I had no business wearing a white coat and examining chalk outlines on the sidewalk, but he missed the point, I think. It’s funny because he started out studying social work and ended up as a drama teacher. He asked me at the time what I was doing because, he said, “You’re a writer!”  Oh, Dad. Jeez.

So there I was, with no hope of completing a degree in a major that no longer existed. Turns out my fallback was Sociology. But I often wonder why I didn’t just go with English, since the English classes I took were some of my favorites. My whole transcript is a hodgepodge of subjects. Once I had enough units in my major, I went off in a bunch of different directions: Astronomy (hardest class ever), Organizational Behavior, Biology of Man, Public Administration, Social Psychology, and Journalism. Because I was working full-time and taking one class a quarter for several years, I didn’t graduate until almost ten years after I started. (To clarify: I began taking classes at Cal while still a junior in high school. Then I took a year off to work full-time. When I came back, I took as few units as I could to accommodate my work schedule).  My transcript begins Fall 1968, shows a name change in September 1973, and Bachelor of Arts granted on March 26, 1977. A long and winding road, indeed.

What I ended up doing in my working life had nothing to do with organized crime or sociology, but it had everything to do with being a helper. I became a short-term crisis counselor, first working with parents of critically ill or premature newborns in an Intensive Care Nursery at UCSF. I went back to school and earned a Master’s in Clinical Counseling. Again, not exactly a straight line  from my undergraduate work. Then I went through a program for College and Career Counseling and worked in high schools for over 15 years. In 2011, I earned an MFA in Creative Writing and there you go. Should’ve stuck with English.

14 Responses to A Long and Winding Road

Becoming a Journalist — Lightning Rod or Seismograph?
by Edward Guthmann
My Career Matched My Major
by Joe Lowry
Your Major is a Tool Set, NOT a Pre-Packaged Solution
by Steve Williamson