Am I Bourgeois? An unreliable narrative by Charles Degelman
100
(152 Stories)

Prompted By The First Time
6 comments. 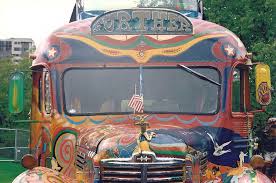 My partner and I had been on the road for nearly three years, ascending into the mountains of Colorado and eventually ending up on a collective farm in the Berkshires. There were plenty of first times during these adventurous days, but one first time stands out from the rest.

Our first two years on the road had been crazy and exciting. We learned to live different in the mountains, hauling water from the creek, trimming kerosene lamps to heighten their brilliance, cooking on wood stoves while we transformed a small, near-abandoned mining town into a bona fide community with a mayor and city council, a town hall, a community center, post office, a fire department, and a waterworks.

What was I doing with this new scheme? Was I planning to…settle down?

Had we missed a beat during this mission, our whacky, high-altitude town would have reverted to the feds, who were intent on leasing the land to big corporations like IBM and Hewlett-Packard, who were, in turn, intent on transforming our town and its gorgeous environs into a playground for its workers. Long live anarchy! Death to the corporations!

At the end of year two, we had left our Rocky mountain town, she first, heading down the hill with the kids, wisely departing after a long, relentless winter. I soldiered on as usual — communing and carpenteering until I woke up one day, my heart aching. I closed down the cabin, said goodbye to my high-altitude comrades, and glided down-canyon toward the crossroads of Boulder. To the north lay the Interstate and the road west to San Francisco. To the east lay the past and my surrogate family. Without reason, groping for inner guidance, I turned toward the past, my pickup truck and camper a mechanical beetle crawling along a straight-lined highway that bisected the immense Colorado plains. End of year two. 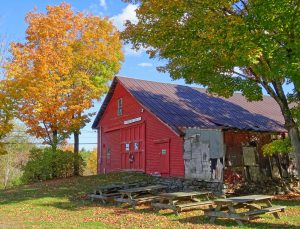 Our third year on the road was not so hot. I reunited with my surrogate family on a farm in Maryland where we stayed for a time in a colonial farmhouse with a big red barn. Jealousy put us back on the road after my partner re-focused her affections on me. “Just in time,” she mumbled as we embraced in front of her old friend, the farm owner. He refused to drop his thing for my partner but she wasn’t having it and neither was I.

We packed up and headed for the Berkshires, vagabonding from one collective to the next in Pennsylvania, then Vermont, eventually arriving in a tiny farming community near Amherst, where a crowd of pals had recently purchased a dairy farm with another big red barn.

Once again, the arrival didn’t click. The old friends seemed hell-bent on becoming their parents. After all that resistance and youthful rebellion, they seemed to be opting out for family, recouping the credentials granted them by their educations, eager to extend the petit bourgeois legacy of their ancestors. They were quiet and ordered, protective of each other and their kids. They passively but aggressively began to disapprove of our gypsy-trucker ways.

I recall sitting on the farmhouse stairway after a particularly stressful house meeting. Several of our comrades had politely explained to us that we had become a pain in their collective ass. They found our anarchy distracting, although none of them could explain which elements of our behavior were keeping them from their flight back to the fold.

Hell, we said. Let’s get out of here. We would return to San Francisco. The kids would go to the same school for an entire academic year, I would return to the theater, she would apply to law school. We would buy a big, old house in the city and offer food, shelter, and family to our starving-artist friends.

Wait a minute, I thought. Law school? Buy a house? Hadn’t that been the downfall of all my formerly rabble-rousing compadres? Once you sign up for a degree, once you’re saddled with a mortgage, it’s over. You’re sleeping with the enemy, squelching your personal freedom, and distancing yourself from political resistance. What were we doing? What was I doing?

I’d never thought of myself as bourgeois before. My family, its status fragmented by McCarthyism and mental illness, lived between realities in a déclassé suburban netherworld. On my own, I migrated seamlessly from a hazardous childhood to a youthful life rich with a few good pals, rock ‘n’ roll, ban-the-bomb determination, a love for the Freedom Riders, and the romance of Beat culture. We shall overcome, we sang, while we watched the best minds of our generation destroyed by Alan Ginsberg’s howling madness. We attributed this desolate insanity to the dangers of remaining in the rat race. 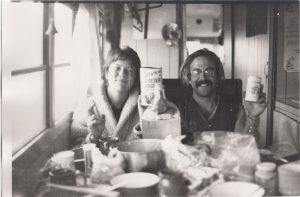 I never looked back and, by the time we were on the road, I personified the polar opposite of bourgeois — a ragged, self-proclaimed revolutionary artist, a hippie carpenter, a folk musician and an actor who had fled his heritage in search of a brave new world.

We traded my truck for a well-equipped school bus, gathered up two of the more rebellious farm folks, and drove into the future, back to San Francisco.

One year later, we had become the cautious owners of a mortgage and a ramshackle Victorian house on Bernal Hill. As with so many first-time adventures, our fears of regression were subsumed by an ecstatic feeling of control. We owned the means of production by shaping our own environment. Each of our surrogate family members moved into a separate room and the old house became a center for actors, musicians, and alternative gardeners.

The place rocked out. We ate together, we played music together, we repaired broken windows and built a back deck. We fixed each other’s cars, tossed current events around the circular kitchen table every night, all for sixty-five dollars a month.

Once ensconced in our once-dreaded first-time vision of ownership, we lived happily ever after… For a while.  First times usually don’t last long, but I’ve owned the places where I’ve lived ever since.

6 Responses to Am I Bourgeois? An unreliable narrative