Russian athletes have systematically cheated for years. The Wikipedia page is too long and complicated to try to condense and enumerate the many faults, going back decades for this story, but let me give you some “highlights”.

For years there was state sponsored systematic doping. They have been stripped of 46 Olympic medals. The most flagrant abuse was discovered after a whistle blower complaint to the World Anti-Doping Agency. It was discovered that tainted urine and blood samples were being swapped out for clean ones through a hole in a lab wall, before the samples were tested for illegal drugs. This went on between 2010 and 2014. Many of the major athletes were banned from the Olympics in 2016 and those that were allowed to compete had to do so under a neutral flag.

Russia was banned from all major sporting events in 2019 for four years, but the Court of Arbitration for Sports reduced the ban to two years in 2020. But rather than suspending the athletes themselves, the coaches and the whole Russian Olympic Federation, the punishment was only that future athletes couldn’t compete under the Russian flag. Rather, they had to compete under the neutral Olympic flag. If they won, their national anthem wouldn’t be played. Big deal. They could continue to compete with barely a slap on the wrist.

Compete and cheat they did. This time, they were allowed to carry a flag that showed the Russian colors and the team was called the “Russian Olympic Committee”, whatever that meant. If they won, strains of Tchaikovsky’s “Nutcracker” would be played during the gold medal ceremony. That showed ’em.

During this winter season, a 15 year old skating phemon was on the rise; Kamila Valieva. All the professional commenters swooned over her. They’d never seen anyone so talented, so lovely and she could do multiple quad jumps (never before landed in competition) like it was child’s play. Yet, at the Russian National Competiton on December 25, 2021, she tested positive for a banned substance: trimetazidine, a heart medication that no 15 year old would ever be prescribed. It could be used to boost endurance during training. She was banned from the team for a day, then reinstated. The bad sample was sent to the official testing lab in Switzerland…not to be heard from for weeks and weeks.

She went off to China and competed in the first round of the Olympic Winter Games. She was flawless and exquisite, helping her team win gold in the team skating event.

Suddenly, the Swiss lab came back with the definitive test results. Yes indeed, her sample was tainted, she had the banned substance in it. Why had it taken so long for them to test it? They were short-handed due to Covid, they claimed. Who knows what the truth is. A hasty plea for arbitration was made. She is only 15, a “protected minor”. This gives her special status. The adults around her spoke for her. She appeared over Zoom and said she drank some water from a glass that her grandfather, who took the medication, had also sipped from (WHAT?).

She performed well enough the night of the individual short program. She sat in first place as she waited for the committee to decide her fate. They decided that, since she was ONLY 15, she shouldn’t be punished. (This was provisional, waiting for a final ruling that could takes months to decide.) She was not responsible for what went into her body.

The Americans who provided “color” commentary cried foul. Tara Lipinski, herself a gold medal winner at the age of 15, said she was drilled at an early age to know EXACTLY what she ingested and to be careful about everything. Johnny Weir, another former Olympic skater, said this would ruin their sport, it could no longer be trusted that everyone was playing on a level field. He was furious. Both agreed that she should not be allowed to skate, as much as they thought she was a prodigy. Her cheating should not be rewarded, even if she was only doing what her coach (who was notorious for getting results while emotionally abusing her charges) told her what to do. Another example of Russian bullying tactics.

One could sense her nerves when she went onto the ice the evening of the long program. And she fell apart. She landed on her butt twice. She couldn’t land her quad jumps, which had been gorgeous in the team event just days earlier. She is only 15 and the world had turned against her. She had no one to protect and comfort her. She had to be perfect for the Motherland and she didn’t have the emotional maturity to do that. She left the ice in tears. Rather than consoling her, her coach chided her. Kamila finished in fourth place.

Thomas Bach, the President of the International Olympic Committee went on TV the next day to chastise the coach and the system that did not support this poor young girl and finally understood why it would have been better to keep her out of the glare of the spotlight. One just doesn’t do that to a 15 year old. The question of her eligibility was only provisional. It is still being adjudicated. The Russians could still lose their gold medal in the team event, and deserve to do so.

With the Russian invasion of Ukraine, all Russian athletes are now banned from international competition, as part of sanctions being imposed to isolate Russia from the civilized world. A different young Russian figure skater won the gold medal at the Olympics, but will not be able to defend that title at the World Championship. For the moment, the ban settles the issue of cheating, but only for the moment. 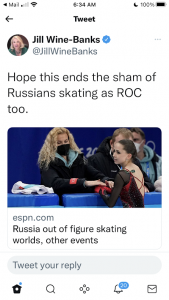 Tweet from Jill Wine-Banks (friend of a friend) after Russian invasion of Ukraine; all Russian athletes banned from international competion.

22 Responses to Ban Them All