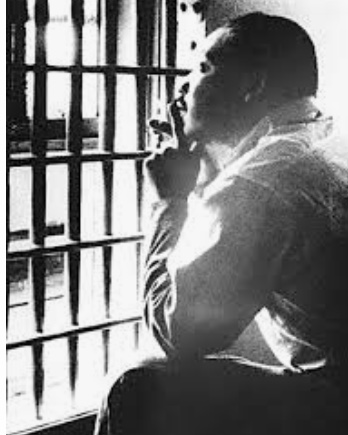 On the evening of April 4, l968 my boyfriend called to tell me he had just heard on the news that Martin Luther King, Jr had been shot.   We cried together over the phone,  and during that call we decided to marry – our small way of bringing some joy back into a sorry world,  of defying the sorrow.

Many years later I found myself in Birmingham,  Alabama attending a school librarians conference.    The keynote speaker was Maya Angelou who addressed us in a huge amphitheater,  her distinctive voice filling the space.

She retold the story – familiar to us librarians – that she told in her memoir I Know Why the Caged Bird Sings including her childhood rape by her mother’s boyfriend,  and the following six years when she would not speak.   She was traumatized by what had happened,   and also guilt-ridden over the murder of the man who had raped her,  thinking her voice had caused his death.

In the years she was mute,  she told us,  she began to read,  and the devotion of her grandmother,  the encouragement of teachers,  and her own growing love of literature helped bring her out of her silence.

When a school competition was announced with each student to recite a poem by an admired writer,  Maya told her grandmother she planned to read a Shakespearean sonnet.   The old lady was appalled,   saying instead that she must choose a poem by a Black poet.   But Maya insisted,  “I have as much right to Shakespeare as anyone,  he wrote for me too.”

During my few days in Birmingham I visited the 16th Street Baptist Church bombed in 1963 by Klansmen,  and saw it’s memorial to the four little girls who were killed.

And I paid another emotional visit to the Birmingham Civil Rights Institute and saw a replica of the small cell where Martin Luther King was imprisoned and where he wrote his famous Letter from Birmingham City Jail.

Sadly,  is it still.