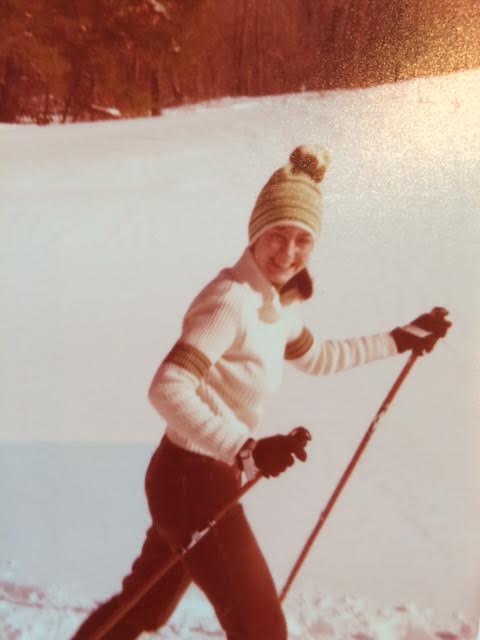 The weather report called for snow, but none had come yet, so we all went to work; no call for alarm. It started snowing around noon on Monday. I watched from the sixth floor as the cars started leaving. I thought I’d wait a while, hoping the single-lane driveway would clear out a bit. Big mistake. Two hours later, when I decided to take the 18 mile drive home from Waltham to Acton along Rte 128 up to narrow Rte 2 through Lincoln and historic Concord, the roads were barely passable with creeping cars. The Blizzard of 1978 was in full swing.

I drove an ancient Valiant, no 4-wheel drive or snow tires, so driving was treacherous. I planned to stop at the supermarket a mile from my house, as Monday was my regular grocery day and I needed to shop. I arrived at 4pm and they were closing up. They told me I couldn’t take a cart, could only get what I could carry in my arms and be quick. I felt like I was in an episode of the old game show Supermarket Sweepstakes. I quickly prioritized what was essential and ran from lane to lane, got to check-out as they closed the store. It then took me an hour to drive that last mile home. Dan had been home from Cambridge a while. We checked in with his family, still living in the area. His mother, a teacher in Stoughton (south of the city), almost got caught in an historic back-up of cars, abandoned on Rte 128 (not unlike the backup in Virginia on I 95 in early January, 2022). She barely made it home to Newton. Everyone else was safe.

And home is where everyone stayed for a week. Governor Dukakis declared a State of Emergency and a travel ban. No one was allowed to drive or come inside Rte 128 for 5 days, so we all stayed put and watched the governor on TV with his wonderful sweaters. We got two feet of snow in 36 hours with white-out conditions. After, the weather turned fine and Dan and I went cross-country skiing next to our condo complex. It seemed like a lark.

The following year I had moved to Chicago, city of big shoulders and wind! In January of 1979 we were hit by a nasty blizzard. Again, two feet of snow and hideous winds. It started on a Saturday and lasted into the next day. But the weather did not turn fair after and the mayor and governor did not shut the city down. The weight of the snow was so great that roofs collapsed. I was glad that I paid a little extra money every month for covered parking. By that time, I had a VW Rabbit with front-wheel drive and thought I could drive through anything, though I usually took the bus around town. But after this blizzard, the temperature dropped to -18 with wind chill causing it to feel like -40! It was ridiculous. And we all tried to get back to work on Monday. Everything froze. Side streets couldn’t be plowed. I tried to take the bus to work, but each bus was full and humans dressed for work weren’t meant to stand on street corners in such cold weather (even if I lived two buildings from a bus stop). I finally got my car and drove to the office. Only the few people who lived in town got to work that day.

Mid-afternoon, it started snowing again and I headed home, dropping off the other two hardy souls who had also come in. They both lived on major streets, so I could get to their buildings. I lived on a one-way side street, off Sheridan. I had to go past my street, turn down another and turn up my street to get back to my building and the safety of my covered parking spot. I tried the first street. A car was abandoned in the street,..and another, and so on. I finally turned the wrong way up a street, came down the street above mine – so close – and got stuck! My little front-wheel drive car was in too deeply and couldn’t get any traction. I hailed down four strong-looking guys and begged for help. They lifted my car out of the ruts, got it back into some tracks as I made the turn onto my street and I safely got home, vowing to not take my car out until spring. It was like that for weeks. The mayor was voted out of office.

The following week, others started coming back to the office. Stories about people going crazy from cabin fever were on the news. Many of the side streets were still in terrible shape. Two of our newer sales reps, friends since they had served in Vietnam, returned. They were big, strong  Black guys who liked to tease us petite women in the office, but they were kind and well-liked. One was separated from his flight-attendant wife and had an adorable little girl who shared a birthday with me. He had been baby-sitting her the previous week. We were joking around as he left the office that Monday afternoon, rubbing my shoulders (yes, we still did stuff like that in those days), singing along to the radio to some sexy Rod Stewart music. He went home to get his suitcase, as he was heading to the airport. He lived on Addison, near the ballpark. The street was blocked by a car. He laid on his horn. Three people came out of the building, two men and a woman, high on cocaine. Darryl was a big guy and was vehement as he got out of his car to tell them to move the offending vehicle. One of the two men swung at him with a 2 x 4, knocking him down, the other stabbed him repeatedly. The woman stood in the doorway and watched. Darryl tried to fend off the blows but couldn’t, he dragged himself to the doorway of his building where he collapsed and died. This news greeted us as we came into the office the next day. We were stunned, numb, beyond grief. We all attended his funeral on Friday, and prayed that the criminals would go to prison for a long time, which I believe they did.

We were set to perform the Mozart Requiem on Saturday, January 24, 2015. We had a great dress rehearsal the night before. It started snowing mid-afternoon on the 24th, nothing big, but the mayor declared a parking ban and we were done. Concert canceled. The snow had stopped by the time we were due to sing that night and we only had about 4 inches of accumulation. What wimps! How disappointing. I went grocery shopping the next day, amid reports of a big storm coming on Monday. The grocery store was a zoo. Even with all our SUVs, you’d think we were hunkering down for hibernation. The next day, I tried to go my Pilates class in the morning (no snow in sight). My gym is in the same building as a Wegman’s grocery store. I drove around for half an hour and couldn’t find a place to park. I gave up and came home, put on an old DVD with a Pilates class…thoroughly disappointing all around (the DVD and my inability to find parking).

The storm, named Juno, started around mid-day. It was quite lovely. We didn’t need to go out. I took photos on my phone and posted them to Facebook, first at mid-afternoon, then later in the day. We got about a foot of snow; a real storm, but we were all around and about within a day or two. 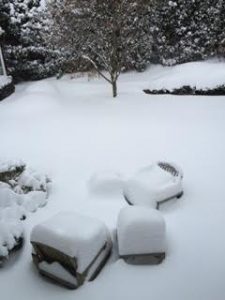 But that winter was unrelenting. And cold. We never got a thaw, only melting cycles on the roof and we came to learn about ice dam damage…in almost every room in our house. We got unrelenting snow throughout the winter. In all we got 101 inches of snow. It was the snowiest winter on record for Boston. Ice dams are formed when heat from inside the house causes snow on the outside to melt a bit, then refreeze over and over again. We had icicles that came from the roof down to the ground and found their way inside any crevice or weakness in the roof or wall. It was raining along the recessed lights, window frames, down walls…tens of thousands of dollars of damage to the inside of our house that winter, as I described in my story Ice Dams, Feb, 2015. We have a slate roof. We finally had someone shovel off the roof carefully and crews from Minnesota (who had less snow than we had) came and used steam to clean the gutters free from the ice. Insurance paid for some of the damage and we put new insulation in the attic, heat wires in the gutters to keep them from freezing. and other measures to ensure that this never happens again.

Snow is lovely in small measures, but not when real damage is done.