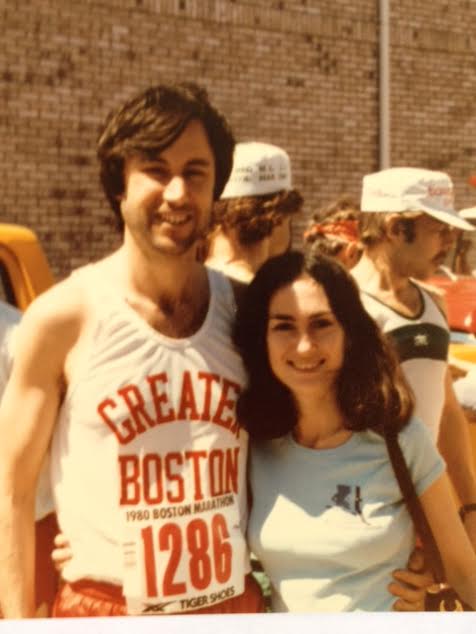 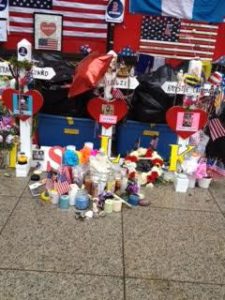 Memorial a few days after the 2013 bombing.

I have never been an athlete – no hand-to-eye coordination; never enjoyed participating, always enjoyed watching. Lately I’ve become a gym rat and workout six days a week, staying fit with Pilates and other forms of working out.

My husband always was a sports enthusiast, on intramural football and softball teams in college, but got into running in a serious way in the late 70s. He ran his first marathon in 1977, qualified for the grueling Boston Marathon many times and I became a race groupie. All our friends were runners and they competed in various events: the Falmouth Road Race, The Charles River 5K, and of course the Boston Marathon; always needing to run a marathon earlier in the season to qualify. His best time was 2:44! We lived in the Back Bay, near the finish line, so I would wait for the guys there. I saw Rosie Ruiz, the cheater, come across the line on a hot day in 1980 and snapped her photo, seeing the first woman’s number. Dan never came across. He had “hit the wall” at the 21 mile mark, “Heartbreak Hill”. At the time, we had friends living there, who threw a big party. I drove out there to find him lying on the grass, recovering.

When those friends moved away, we took over with the big party. For 29 years, we’ve lived in Newton at the crest of Heartbreak Hill, where we always watch the Marathon. I had friends running it three years ago and was out on the course waiting for mother and daughter in the afternoon. Helene’s daughter had gone by, but I waited and waited for my friend. At about 3pm, a young woman came out of the pack to speak to me on the sideline. She asked if I’d heard any news. She had gotten a text from her brother, a firefighter at the finish line. He informed her that two bombs had gone off. She looked to me for confirmation or more information, but I had none. I had been standing there for a long time with no phone, no link to the outside world. I told her I was sorry, I could not provide more information. It was the first bit of news I had and I ran home to turn on the TV. Coverage is supposed to end at 3pm, but this was turning into a huge news story. I stood, stunned, watching it unfold, real time. Texts and phone calls started pouring in from across the country; all knew that I watched the Marathon on the course and wanted reassurance that I was unhurt. Eventually I posted an account on Facebook, thanking people for their concern.

We received a robocall from the City of Newton to “shelter in place” early on Friday morning of that week. Newton is next to Watertown, where the shootout between the two terrorist brothers and the police took place overnight. One died, one escaped. As the day wore on, my husband grew bored and decided we should go outside the designated area, go to a movie and out to dinner. News alerts came across my phone that the surviving brother had been captured once the “shelter in place” order was lifted. A homeowner in Watertown went outside to check on his boat and noticed blood on the side of the tarp, covering it. He called in the police immediately and the bomber was captured. The next week I was in the area of the finish line, walked over to the bombing sites and thought of all that had happened there. Three young people lost their lives, countless others seriously injured. The unthinkable. I had lived in that neighborhood for seven years and loved it. Now it was the site of an act of terrorism. The motto of the city became Boston Strong. The sports teams rallied. David “Big Papi” Ortiz, famously said at the next Red Sox game, “This is our fuckin’ town!” and perfectly captured the sentiment around the region.

The 120th Boston Marathon is happening as I write this. I have just returned from Heartbreak Hill. Everything has changed. There were always various forms of barriers, as the race became larger and larger, but it was a festive atmosphere. Awakening from the New England winter, this rite of spring was a place to see your neighbors, run across the road and see people on the other side of Commonwealth Avenue, buy fried dough on the mall, have a great time. Now serious barricades block access to the mall and the other side of the street. National Guardsmen jog the entire course. The feeling is one of caution and restraint. Granted, I was there to see the leaders go by, (a relatively slow day). The crowds will swell as people come to see their relatives running. 4,000 qualified runners did not get numbers. Now the emphasis is on the large hordes of charity runners; most are not qualified to run this event. While they are raising huge sums of money for great causes, the race is not necessarily an elite event, except at the very front of the pack. The road is now closed from 8am until 6pm, hours longer than just a few years ago.

It is still the Boston Marathon, the greatest marathon of them all, but it has irrevocably changed.