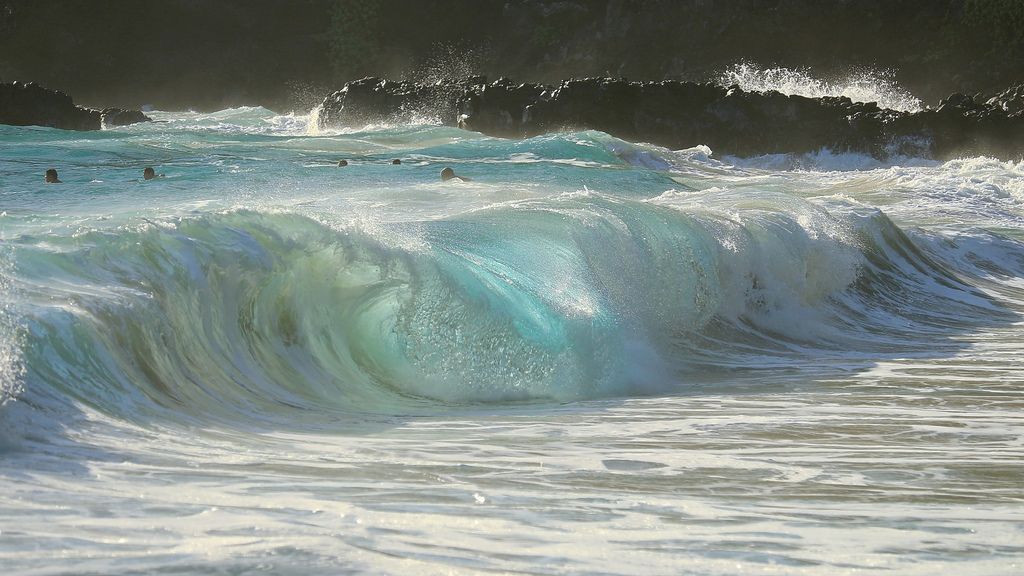 I don’t know what my Uncle Larry was thinking, taking me to Makapu’u Beach for my first time bodysurfing. Knowing my uncle, he wasn’t thinking about me at all. He wanted to bodysurf at Makapu’u. I was just along for the ride.

Honolulu was the last stop on a three-generation Asia trip with my grandfather who, in his later years, wanted to see the world. Three years before, he had taken me to Europe and Israel. Now it was 1966 and I was 15, taking three weeks off school because travel is, you know, broadening. We had already toured Japan, Bangkok, and Hong Kong. A final few days in Hawaii were the cherry on top. 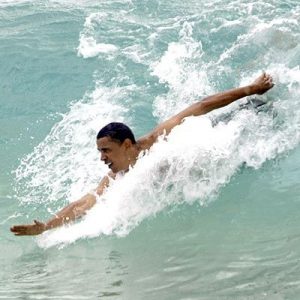 Bodysurfing, for the uninitiated, is like surfboarding without the board. In fact, your body takes the place of the board. You swim out just beyond the break and tread water, looking for a swell just about to crest. You turn toward shore and start swimming, looking over your shoulder at the wave, and at the right moment you kick like mad. If you’re lucky, the wave catches and carries you in mid-swell, one arm extended like a knife, for two or five or ten seconds of pure exhilaration.

But learning how to bodysurf at Makapu’u is like learning how to rock climb at Half Dome. I was a good swimmer, but my ocean experience was limited to playing in the two-foot waves of Miami Beach on childhood winter vacations. Makapu’u, warns Hawaii Magazine even today, is for experienced bodysurfers only. “The shore break and riptide here, even on a day of mellow surf,” it adds, “can be challenging.”

I knew nothing about these warnings, but I liked water sports and this sounded like fun. When we arrived, the waves were 5 or 6 feet high, as I recall, and several people were out riding them. As soon as I got in the water I felt the riptide tugging at my feet, trying to suck me out to sea. We were not in Kansas anymore.

We swam out past the break and Uncle Larry showed me the ropes. There are two critical points in bodysurfing: catching the wave and getting out of it. Catching a wave takes good judgment and timing, but if you don’t time it quite right, the wave just rolls over you and you move on to the next. No harm, no foul.

Getting out is more problematic. If you know what you’re doing—and remember, I didn’t—at the right moment you curl up and simply roll out of the wave. Otherwise you wipe out, tumbling over and over in the surf until you slam into the sand or bob to the surface. It can take some time for the wave to let go of you, so I learned to take a deep breath before going under and hold it. Even so, I often came up spitting out water, sand, or both.

But I loved it. As I wrote in my travel diary—of course I kept a travel diary! of course I still have it!—“I caught a few good ones. It’s really a blast.”

We came out to rest. By the time we went back for more, I wrote, “the waves had built up and they were a lot higher”—more like 8 or 10 feet. “I caught one good one,” I reported, “and I was exhausted!” Translation: I wiped out royally and was barely able to swim back to shore. 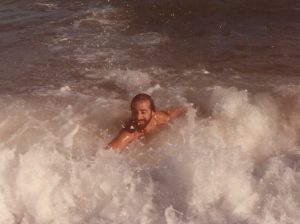 But I was hooked. Bodysurfing was indeed “a blast.” It was one of those addictive activities, like pinball or cheesecake, where finishing one wave/game/bite just makes you want to go back for another. Since then, I’ve bodysurfed at beaches all over Hawaii (including Little Makena Beach on Maui, a nude beach where not only is the break ideal but you don’t get sand in your suit). I’ve surfed in the Atlantic off Florida and in the Andaman Sea off Thailand.

The last time I bodysurfed was a few years ago at DT Fleming Beach on Maui. The break was close to shore so the rides were short. I caught one wave only to wipe out and tumble head first onto the sand, hard.

I stumbled to my feet, taking inventory. I felt my head. It seemed intact, but the word “concussion” leaped to mind. Suddenly, on the high side of 60, I felt a lot more fragile than I did in my teens or thirties. The risks were no longer worth the rewards, I realized. It was time to retire after a satisfying career.

Uncle Larry was crazy to take me to Makapu’u Beach for my first bodysurfing lesson. But I’m grateful that he did.

7 Responses to Catching the Waves