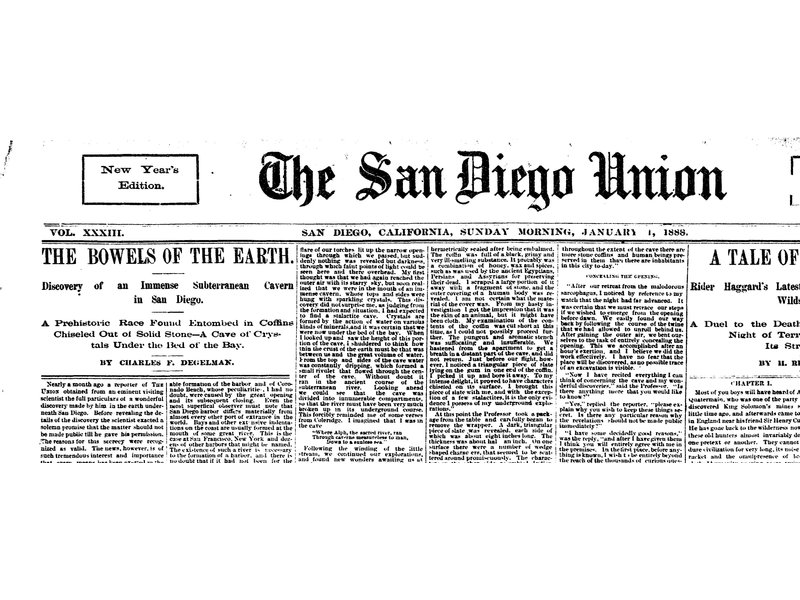 The Bowels of the Earth, a hoax my grandfather wrote into the front page of the San Diego Union

I never knew my grandparents. They died long before I was born. My father died before he could describe them to me. Given the circumstances surrounding his time with them, I doubt that he could have told me much.

Therefore, my fact-or-fiction report springs from primary source materials including pictures, letters, and newspaper articles and the recollections of my cousins and aunts, my father’s sisters. Family myth and the bastard child of my own speculation further fueled this paean to my grandparents.

My grandfather, Charles Degelman was born in Placerville, California, the descendent of German farmers who left Bavaria after the Holy Alliance overthrew the “spectre that [haunted] Europe,[1]” communism.

Even back then, my family was on the revolutionary side, although they left Europe as much due to the weather-induced famine as anything else. My grandfather’s immediate forebears subsequently fought in the Civil War in the Illinois militia and on Mississippi River gunboats, back when the our waterways served as freight and passenger superhighways in peace and war.

So why Placerville? After the Civil War, one branch of the Degelman family climbed aboard a small fleet of Conestoga wagons. My great-grandfather, John Degelman plied his trade as a bootmaker who set up shop on the boardwalk of Placerville, profited off the gold madness, upgraded his harness shop to a boot store, and raised several sons.

Unlike his siblings, Charles, my grandfather, wasn’t much about playing with steam power or handcrafting leatherwork. He took his inspiration from a neighbor, Mark Twain, temporarily in residence in nearby Calaveras county.

A budding and enthusiastic journalist, Charles possessed an adventurous soul. He left Placerville for San Diego, where he took a job on that city’s newspaper, The Union Tribune. It was here that he wrote an infamous feature article, released on New Years Day, titled “The Bowels of the Earth: Discovery of an Immense Subterranean Cavern in San Diego. A Prehistoric Race Found Entombed in Coffins Chiseled Out of Solid Stone.” http://bit.ly/1pHpIed

My grandad’s feature article seems to exist in the same best tradition as Mark Twain’s resounding support of the Great American Lie. To wit, the story doesn’t have to be true but it does need verisimilitude.

There was no subterranean cavern beneath San Diego. According to historian Bruce Linder “The story incited a tidal wave of excitement and chatter. The discovery was on everyone’s lips. The San Diego Union was flooded with inquires; the paper quickly sold out.

The only problem with this swashbuckling tale was that it was a hoax. And it was NOT a hoax engineered by the mysterious Professor Stearns but by the San Diego Union itself!

The San Diego Union was never apologetic about their ruse – even declaring a “Journalistic Success” when they sold out the New Year’s edition.

No legal action was taken against the paper or my grandfather and you gotta ask, who zoomed whom? Did a charlatan geologist dupe a gullible reporter? Did a savvy reporter fool his editor? Did the editor and reporter trick the Union’s publisher? Or…

Did the entire staff pull off an elaborate New Year’s Day hoax on its readership? Go figure.

Hoax and its consequences behind him, Charles Degelman set out to cover the union battles in the barren but lively copper country around Butte, Montana. He arrived as the I.W.W. (read International Workers of the World) locked horns with the Amalgamated Copper Company (read Rockefeller, the Rothschilds, Hearst) as great labor battles, suffrage, and a demand for social justice turned the Gilded Age into the Progressive Era.

At the same time that my grandfather arrived in Butte, another unlikely citizen came upon the scene. Louise Nydegger, daughter among seven raised on a Pennsylvania farm had resolved that she would never marry one of those grumpy, bearded men who formed the patriarchal backbone of her claustrophobic farm community. Louise was pretty, saucy, and straight-backed; at 20 she set off to become a pioneering woman graduate of Penn State University. After earning a degree, with no place else to go but the farm, Louise boarded a steamer for Europe. She surfaced at the Sorbonne where she studied linguistics.

Oh, to be a woman alone in Paris at the end as the old guard battled it out with progress. It couldn’t have all been fun but she learned much from her European sojourn. She returned to America as a proud suffragist with a raging class consciousness. Perhaps her disdain for the farm still drove Louise. She shot past Pennsylvania and didn’t stop until she landed in Butte Montana, where there was plenty of feist — union battles, wild west politics, victimized prostitutes, and uneducated laborers’ kids. Louse began to educate them.

Charles Frederick Degelman and Louise Nydegger met in a union hall where Charles was covering the foment — how to root out the Pinkerton stooges who had infiltrated the Butte Miners Union during the intense labor struggles. I know few details, but photographs tell me that country-boy journalist Charles — now in his forties — and the worldly well-educated Louise fell in love. My father was born in Butte but the smoke of the copper smelters had gotten to his father, Charles. The Degelman family fled the stink of the smelters to join a utopian commune in San Diego where my aunts were born.

The commune turned out to be a land scam. Charles and Louise were soon on their own, providing for a needy nuclear family to support late in life. In San Diego, the tireless Charles took a job on the San Diego Telegram but one day, while waiting for a trolley car to take him to the newspaper, he keeled over from a stroke. Three days later, he was dead, leaving Louise, now nearing menopause with three small children under the age of ten.

Louise went mad. She was placed in a sanitarium but when she was released, she tried to murder her children. Shortly thereafter, long before the demise of Virginia Woolf, the brilliant refugee from a Pennsylvania farm filled her skirt pockets with rocks and waded into the Pacific Ocean.

Charles Degelman is a novelist, editor and educator living in California. You can find more of his writing here.

8 Responses to Charles and Louise — Liars, lovers, and mythmakers