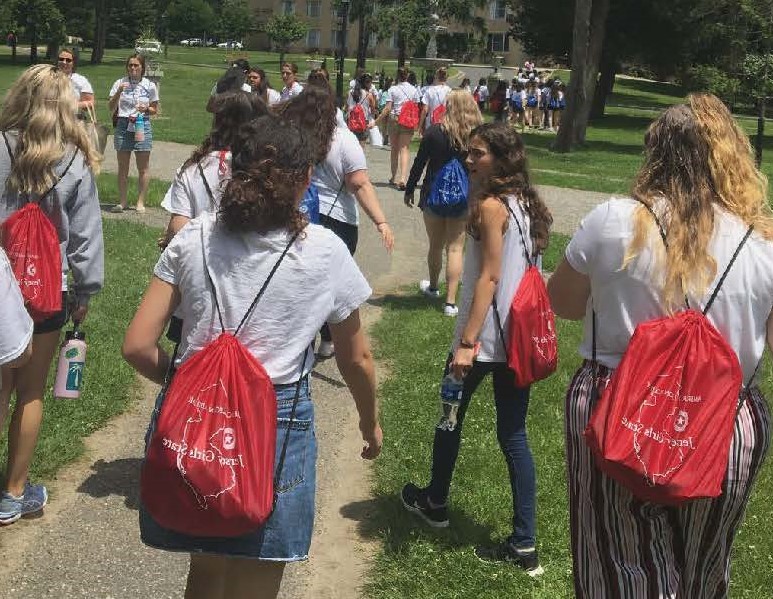 Author’s Note: The image above is from the 2019 session of Jersey Girls State, which is alive and well. Much progress has been made since my experience there 50 years ago, and I was pleased to note the strong overall theme of female empowerment while doing some reality checking for this story. Though some patriotic exercises and “non-denominational” prayer still play a role, thankfully the graduation ball I will describe in the story is no more. According to the program on the website, there is a morning graduation ceremony when nice, but not formal, clothing is worn.

Problem number one: I had no boyfriend and, although I was 17, I had never been on a date.

I couldn’t believe it when the letter arrived in the spring of 1970. I had been chosen as my school’s representative to the Jersey Girls State workshop, sponsored by the American Legion Auxiliary. This, after the disruption of Kent State, culminating in my demonstrating on the Caldwell town square. My opposition to the Vietnam War was well known at school. While not a member of any clique, I gravitated to the artsy, hippie crowd, not the jocks. But, I was intrigued by the program and the exercises about government, and it wouldn’t hurt to have this on my college applications, so a couple of weeks after school ended, I was off to the campus of Douglas College (now Rutgers) for several days of role playing in local and state government positions.

Once I arrived, I found the other girls friendly and intelligent, and my roommate Carol, nicknamed Til, especially nice. Another Jewish girl and I secretly wondered whether the organizers knew about our religion. Despite the opening prayers and pledge of allegiance, the program was genuinely interesting, and I soon became active on the local water commission, where our group addressed water quality in our fictional community.

All would have been fine, except mid-way through the week, the organizers told us about the last night’s “graduation ball,” which was a formal event to which we were supposed to bring a date. Problem number one: I had no boyfriend and, although I was 17, I had never been on a date. This situation was due to a complex set of circumstances involving my shyness, my GPA (in my high school the guys didn’t like smart girls), my parents prohibiting the dating of non-Jewish boys (even though were only about four Jewish boys in my entire class), and their belief that there was no reason to date in high school anyway. (Aside: my parents later admitted this was probably the most serious parenting mistake they ever made.)

What to do? I had no choice but to ask someone, but school was out and social groups disbanded for the summer. I called my mother as a last resort, and she suggested I call my second cousin Russell, who had just graduated from high school–and he was taller than I as a bonus. He probably had a tuxedo from various proms and could come over from Queens to attend. I have no recollection of that phone call, and cousin Ceil, who was Russell’s mother, probably facilitated the interaction, but by some miracle he said yes.

Problem number two: because I hadn’t gone to any proms, I didn’t have a formal dress. Luckily my mother, who was trained as a textile designer and is still an amazing seamstress, had closets full of material and patterns, and whipped up a beautiful dress without my even being home. It didn’t look like a prom dress, but instead was a sleeveless, fitted sheath with a high collar in green organza printed with leaves. Totally sophisticated.

The late afternoon before the ball, everyone was scrambling to get ready. It seemed as if most of the girls had dates easily lined up and weren’t in the situation I’d found myself–except for my roommate Til. She didn’t have a date and hadn’t found one, and was lying on her bed sobbing. Looking back now I realize that probably she was gay. What a terrible ordeal she was going through, and here I was being embarrassed that my cousin was taking me to the ball! It hurts to think about it today.

Oddly, my memory of the rest of the logistics of that evening, Russell taking me, and the ball itself is almost a complete blank. I can’t tell you where we went or what we did, only that there was a photo taken of the entire group of girls in our gowns, and I loved the fact that I stood out in my homemade dress that looked like it came from a boutique in New York. Otherwise, I only remember feeling very stressed but making it through the evening.

What a confusing time of mixed messages it was. Here were these accomplished girls (we’d say young women now) representing their high schools and showing their capabilities, and yet having to find dates to “graduate”! It was such a relief to look at today’s Jersey Girls State newsletter and see photos of AOC and Kamala Harris as role models for the young women today, and sorry, guys, not a man in sight.