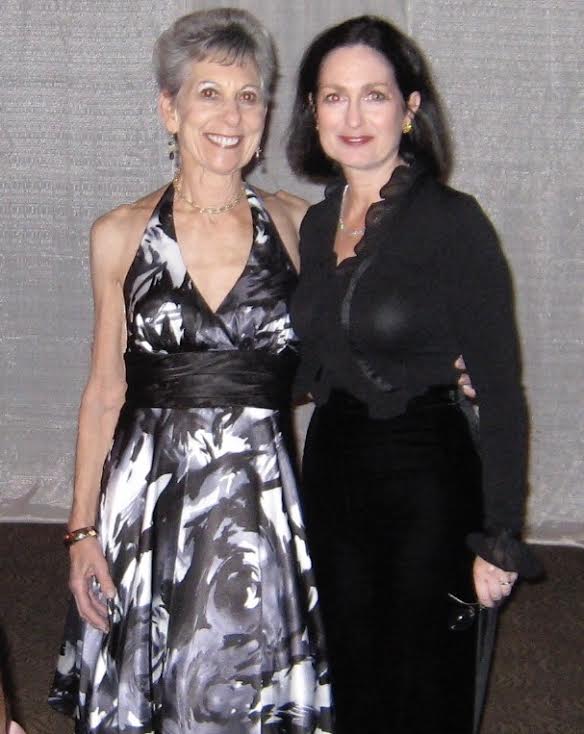 My father was the youngest of eight children, my mother, the youngest of four and I am their youngest. That makes me the youngest in a large generation of cousins, some old enough to be my own parent. We are a diverse group of people, yet we all get along, have each others’ backs and genuinely care about each other. I suppose we were raised to be that way.

Our grandparents were the immigrant generation, and, at least in my mother’s family, there was some family feud and one part didn’t speak to another part. I don’t buy into such nonsense and more than 25 years ago, reached out to second cousins who I didn’t know growing up (though one lived in my neighborhood and went to the same high school), introduced myself and said, “let’s get over this”. We did and, much to my delight, have been friends ever since.

I wrote about my father’s brothers and sisters in The Sarason Clan. You can read about the parents of my diverse cousins in that story. One of my father’s brothers even converted to Southern Baptist to marry the woman he loved. Both his daughters married ministers, so that was in the family too. But we were taught to accept it. We were bound by our blood relationship. On that side of the family there were 19 first cousins in all, though many are now deceased. We had a writer, an IBM salesman, a nurse, a physical therapist, a rabbi, a PhD mathematician, and many others covering a wide range of professions. We are all unique personalities, but we actually enjoy getting together and turn out when invited to weddings and b’nai mitvot. One of my Baptist cousins came to my children’s b’nai mitvot and even wore a Jewish star out of respect for her ancestry. Hers is the first Christmas card I receive every year. 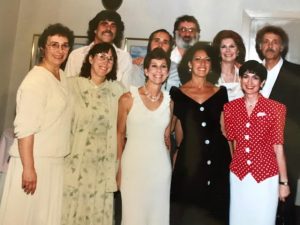 Here are some of us at Mimi’s (in the black) daughter’s bat mitvah in suburban Kansas City 18 months after my father passed away in 1990. It was the first time I’d been with a large group of my cousins and I felt nurtured and cared for. At the beginning of the torah ceremony, the family follows the rabbi, holding the torah aloft and parades it through the congregation. I had never seen that before (now it is common practice, but I hadn’t seen it at the time). I began to weep, seeing that beautiful family altogether, aching for my father. My cousins immediately held me close, comforted me and told me I came by the tears naturally; both my father and Ike (Mimi’s father) were weepers. This helped me so much and validated me.

I was always closest to my cousin Connie, seen with me in the Featured photo at her granddaughter’s bat mitvah. I was the only out-of-town cousin invited, as I have always been very close to her family. I was the 6 year old flower girl at her wedding. She lived a few miles away and this was the long bike ride I would take when I couldn’t stand being in my own home. I would just go and hang out with her and her three sons, all younger than me, but we’d have fun together. 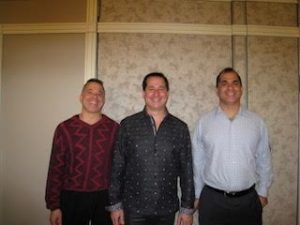 In 1966, my dad won a sales incentive trip to Palm Springs for himself and my mother. Connie’s family took me in for ten days (Rick was a Freshman at Brandeis). Her husband drove me to school each morning, many miles from their home. Their children were little, the boys close in age to one another, as much as 10 years younger than 13 year old me, and a little wild. I wasn’t used to such behavior, but watched them rampage through my room with wonder and amusement. I helped get them to bed. I brought the results of my Home Ec class back to Connie (pineapple upside down cake, as I recall). Gordon even took me to Sunday School. His boys were too young to go yet. For those days, I was part of the family. I became so for life. Even now, when I visit Detroit, for part of each visit, I stay with Connie. She has been my surrogate mother most of my life.

I wrote about my adoration of my cousin Alan in my story Action Jackson. He already lived in Geneva, Switzerland by the time I was born. He was exotic and fabulous. He came to visit his parents, my dad’s oldest sister Pauline, many times a year and we would all get to visit him, so I grew up feeling like I knew him. He passed away at the age of 50 in 1981. I was heartbroken, but stayed in touch with his widow, Sissi, a Viennese beauty close to my age. She and her children (she remarried after Alan’s death, so in addition to her son Gregory, has two daughters) wound up in London. Alone, I went to Vienna to celebrate her 60th birthday in 2008, hosted by her sister. 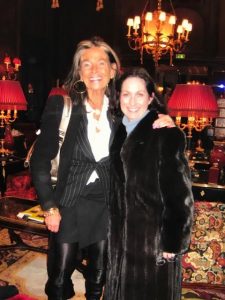 I remain close to Alan’s son Gregory, also living in England and try to see him when I visit my son in London. I was particularly honored when he and his beautiful bride asked me to do a reading at their wedding three years ago. There was a good representation of cousins from the Jackson side of the family (my father’s sister) who traveled in for the wedding and here we are at brunch the next morning. 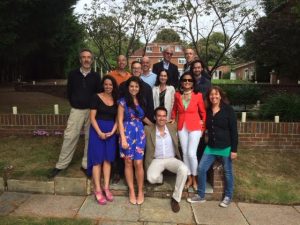 It was good to be together.

On my mother’s side, the cousins are fewer and less diverse. There are 7 of us in total and we are teachers, counselors and doctors. And still, I am the youngest. Lois, my oldest cousin and my mother were pregnant at the same time. Her son is 21 days younger than I am, though he is one branch down the family tree from me. We were always invited to each other’s parties (I do have a really cute photo of me dancing with David at my 13th birthday party, which was held at a dance studio; that was a thing then). 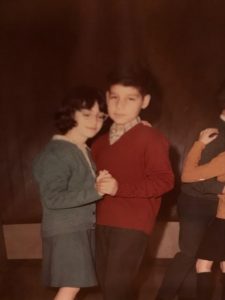 But we didn’t really become friends until we were adults. He is the other cousin I always stay with when I visit Detroit. He and his wife have always been most gracious to me; she took care of my nursing baby during my father’s funeral; I was distraught. It was a kindness I will never forget and can never thank her for enough.

Though my cousins are much older, they have always been very good to me. The women “mothered” me. The men took a while to realize eventually that I was a grown-up, take me seriously and treat me as their equal; their wives have always been wonderful to me.

During my four years at Brandeis, my cousin Dick did his internship and residency at our fine Boston hospitals. He went on to become one of the world’s experts in Barrett’s esophagus. With wife Linda, they were great surrogate parents, having me over when Brandeis took off several days for the High Holidays and I couldn’t go home, coming to see me in my shows (they couldn’t quite believe their eyes when they saw their little cousin in “The Devils”, topless in the final scene). Linda even hosted a shower of my college friends during my engagement my senior year and joined my parents for my graduation celebration in May, 1974, so I have always felt a great kinship with them. Here they are with my Aunt Stella, Uncle Herman (Dick’s parents) and their cousin Fred Sampliner, who attended Babson College, in May, 1971, shortly before I went home at the end of Freshman year. 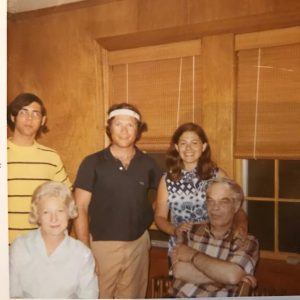 Here are most of the first cousins at one’s granddaughter’s bat mitzvah, minus our oldest cousin, a few years ago. My brother, Rick, is on the right. 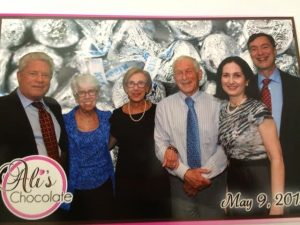 We don’t have many chances to see one another, as some of us live far away, but we do enjoy getting together and we all care deeply about each other. In the above photo, I am wearing our grandmother’s pearls, which I inherited from my mother. I cherish them. Our grandfather owned a jewelry store in Toledo, OH. His son Joe worked there and took it over after his death. The other two women in the photo are his daughters. The woman is blue, my cousin Helene, has a daughter and grandson in Boston. Several years ago, she and her husband (I was a 12 year old Junior Bridesmaid in her wedding), bought a condo in Newton and spend part of the year here now to be close to their grandson, with the added benefit, that I get to see more of her too. 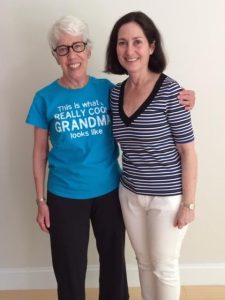 This story goes live three days before my 67th birthday and I am the youngest of the clan. My cousins are aging. Many of their grandchildren are out of college. I can only say how much I love and appreciate all of them. I wish I could see them more often, but we are spread out across the country, indeed, in some cases, even international. The Internet has made communication a bit easier, but I miss seeing them on holidays or family get togethers. I draw strength from them. As the generations increase, the bonds weaken. The branches of the family tree don’t know one another. I seem to be the family historian. I want so much for us to know one another and continue to feel the love I carry for all of my family, that was instilled by our parents. Our parents taught us to value family, to take care of one another, no matter how different we may be. I think these are wonderful lessons to carry on. They seem more relevant today than ever.

15 Responses to Comfort From My Cousins