Prompted By Lost in Space
3 comments. 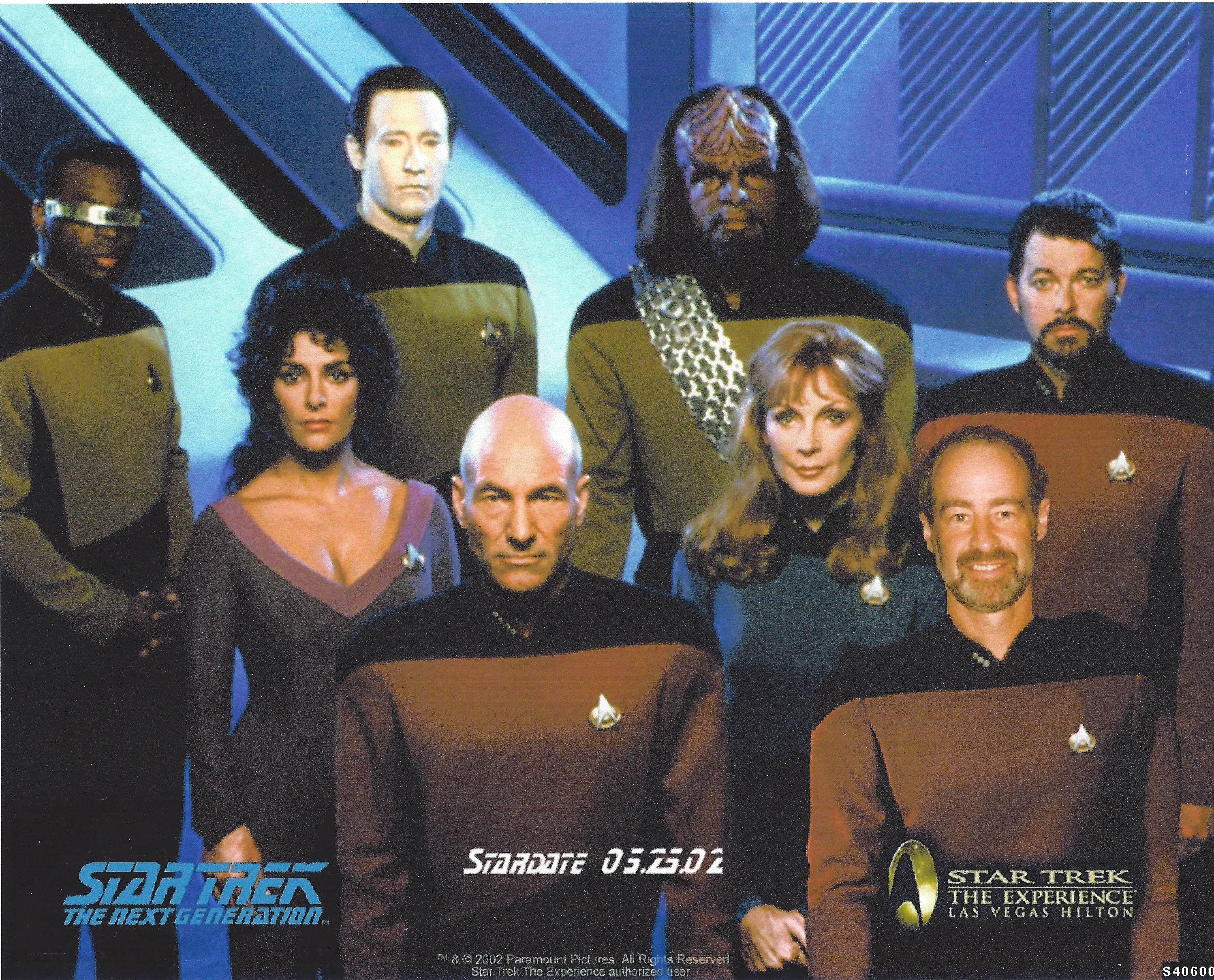 The author (lower right) and his fellow ST:TNG crew members, 2002.

I learned to read early and, once I mastered the skill, read voraciously, from cereal boxes at breakfast to road signs while my mom ferried us wherever. After seeing the serialized Hardy Boys adventure “The Mystery of the Applegate Treasure” on the Mickey Mouse Club, I started reading Hardy Boys detective novels. My friend Bud and I amassed quite a collection—I’ll bet we accumulated 30 or more between us, which we would trade off.

This guy Heinlein could really tell a story.

When we ran out, we branched out. There were the Chip Hilton sports series (he was a varsity star at every high school sport) and the Tom Corbett, Space Cadet series (he navigated the solar system with his Martian navigator and Venusian engineer). All of these books were pablum for young readers like us and we raced through them, one after the next. (I later learned that most were collectively ghostwritten by underpaid authors in a syndicate.) 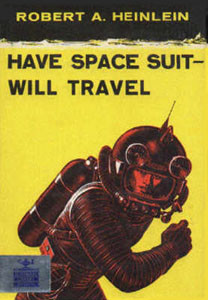 Around that time, during one class period in our grade school library, I happened on a book I hadn’t seen before: Have Space Suit—Will Travel by Robert A. Heinlein. I rarely found anything of interest in our tiny one-room library, but this looked intriguing. I liked Tom Corbett, and I was fascinated by the space race, with the US desperately trying to catch up with the Russians. I checked out the book and took it home.

Holy cow. Not only was it written several notches above the syndicate books (yet still for young readers), but this guy Heinlein could really tell a story. (If the name sounds familiar, he also wrote Stranger in a Strange Land that became a boomer cult book in the early ’70s.) And what a story! Kip, a bright high school student, enters a contest in hopes of winning a trip to the Moon. Instead, he wins an obsolete, broken-down space suit. He painstakingly repairs it and, before selling it to help pay for college, puts it on for one last walk. He picks up a signal on the suit’s radio and the next thing he knows, he’s captured by wormfaced aliens on a flying saucer and imprisoned with a preteen named PeeWee and another being who speaks in birdsong, whom Kip dubs the “Mother Thing.” Together they travel the galaxy, fight the aliens, and end up at a galactic trial with the fate of humanity at stake.

By the time I returned it to the library, a bit shell-shocked, I was captivated. In fact, a month later, I checked it out again and reread it. 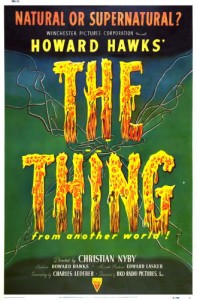 Original film poster from “The Thing From Another World,” based on “Who Goes There?” by Don A. Stuart.

If Have Space Suit hooked me, what actually landed me was a thick anthology, given to me a few years later by an unremembered benefactor, of the world’s best science fiction. The stories and novellas it collected were, I learned later, bona fide classics. There was “Nightfall” by Isaac Asimov, which postulated a planet in a solar system with six suns, that experiences night only once every two thousand years. There was “Who Goes There?” by Don A. Stuart, about a team of Antarctic researchers who discover, and thaw, an alien creature with the power to devour, inhabit, and mimic other beings—which Howard Hawks had made into the horror thriller “The Thing From Another World,” and which has been remade three times since. My favorite was “By His Bootstraps,” another Heinlein story, in which a man gets so embedded in a twisty time loop that he keeps meeting other versions of himself. I’ve kept that book through many moves and purges, its cover now detached from repeated reading.

Looking back, what I loved about these tales was that they were pure stories, without the moralization, pedanticism, and false optimism of children’s books of the time, yet without the pretensions of adult “literary” fiction. They were stories that celebrated the art and craft of storytelling. I found that later in Star Trek (both  original and next generation), the original Star Wars trilogy, The Hitchhiker’s Guide to the Galaxy, and many other works outside the sci-fi genre.

In fact, you could argue that, without reading those early science fiction classics, I wouldn’t be writing this story on this website today. Retrospect was born of the conviction, shared with my co-founders, that all of us have stories to tell, and that pure storytelling matters in a world where it’s all too easy to be cynical. Stories are our space suits. Let’s travel.

3 Responses to Confessions of a Sci-Fi Nerd