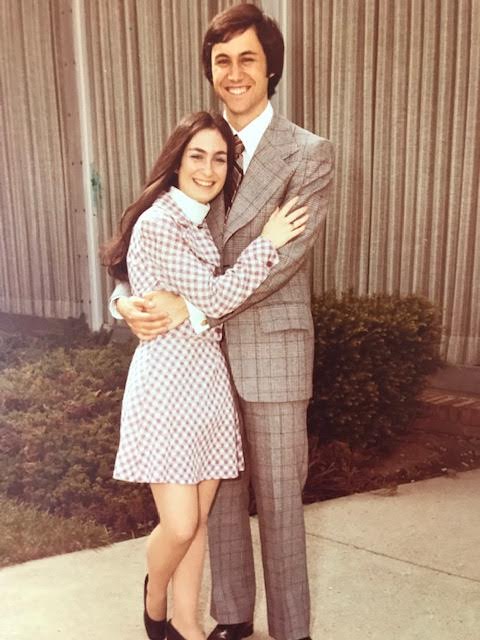 First a word about “honeymoon”. We were at a fabulous wedding in England last October. The father of the bride began his toast holding up a bottle of mead. He commented that it was the custom in old Saxon English days to offer newlyweds bottles of mead, also known as honey wine, since it is made with fermented honey rather than grapes. The couple were provided with a month’s worth of mead, or one full cycle of the moon, as it was thought to boost fertility (at least drinking it the couple would overcome natural shyness and have a lot fun). Thus, “honey” wine, paired with a moon’s cycle of drinking it was a “honeymoon” and that is the derivation of the word! We all loved that story.

Dan and I were married at my home temple in Oak Park, Michigan on Sunday, June 16, 1974, 45 years ago. My newly-ordained brother co-officiated with the rabbi I’d known my whole life. My father told me what his budget was, so I opted for a rather simple but nice early afternoon ceremony with only passed hor d’oeuvres, sweets and a wedding cake, no sit-down dinner and a good-sized check to start our married life. The Featured photo shows us in our “going away” outfits.

We honeymooned driving through Canada, making our way back to Boston. Our wedding night was spent at the luxurious Hotel Pontchartrain courtesy of my Uncle Lew and Aunt Ann. Uncle Lew was their lawyer. The hotel was downtown, right at the mouth of the Ambassador Bridge, crossing over to Canada (no border control in those days; we used to go to Windsor, Ontario for dinner on occasion, passports not required), where we were headed the next morning, our Toyota loaded to the brim with wedding presents.

We came down to the dining room for an elegant dinner, our first as a married couple. We chose chateaubriand, a delicious steak for two. The waiter, with a white serving napkin draped over his arm, smiled and remarked, “That’s a cool deal!” We could barely suppress our amusement, but the dinner was exceptional and went on to the room bill. Thank you again, Uncle Lew and Aunt Ann. The whole experience was wonderful and a very “cool deal” for us.

Back in the room, I slipped into what I thought was just what a beautiful, blushing bride should wear: a flowing pink, lacy negligee, again purchased for me by my Aunt Ann (whose grown daughter had children my age: four boys. Aunt Ann, my mother’s oldest sister, always treated me like a grandchild. My own grandparents were all gone). Dan and I had been virtually living together for the past year, as he came over to my dorm room every night. He didn’t fall for this notion of romance, took one look at me and said, “Take that ridiculous thing off!” I was crushed. That was not how I wanted the evening to play out. I wanted romance, he wanted something else. He got what he wanted, but was lucky to, after that comment.

Bright and early the next morning we drove into Canada to Stratford, Ontario and the Shakespeare  Festival. I had been many times with my family and loved the place. It seemed like a great way to start the trip. That night we saw “Love’s Labour’s Lost”, not one of Shakespeare’s best known, but the Festival always does a great job with production and staging and gets first class talent.

We continued on to a resort outside of Toronto called the Guild Inn. I had stayed there a few years earlier with my parents. It had seemed nicer then. Now the tennis courts were cracked (at this point I still tried to play tennis) and the weather didn’t cooperate. The view of Lake Ontario was fogged in. We went into Toronto and spent the day at the Science Museum. On June 20, we spent the day at Ontario Place and in the evening met up with my parents and brother, also visiting Canada. My dad treated all of us to a nice meal at Hungarian Village. It was actually pleasant to see them mid-way through our trip. My brother would soon start his PhD at Brown University and be too busy to surface for years.

On to Canada’s capital: Ottawa. We saw the capital building and the changing of the guard; a mini-version of what goes on in front of Buckingham Palace. We knew it would be a long time before we got there. There were loans to be paid, grad school for Dan to get through, I still had to get a job. This was a budget honeymoon.

Next stop: Montreal. We had dinner at the the Chateau Champlain, which was quite lovely. This was the most European of all the cities we visited and we toured around. On Sunday, we visited “Man and his World”, which is what “Expo ’67”, the big World’s Fair, became. Dan and his father had biked up there when he was younger. He was curious to see it again. This is the only place on our entire honeymoon where we took a photo of each other. 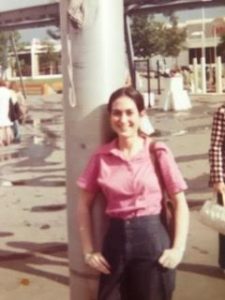 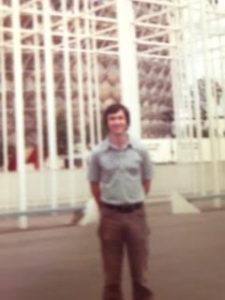 The symbol for Expo ’67 was the big geodesic dome which is in the background of Dan’s photo. I still was using my little Kodak Instamatic camera, which didn’t take great photos.

That night we had dinner at Moishe’s, a Montreal institution. We took a bus tour of the city the next day, and capped off the entire trip with dinner at the Hotel Bonaventure, an elegant treat.

I had visited Niagara Falls with my parents and brother on my way home from Brandeis just six weeks earlier, so didn’t feel the need to do that honeymoon cliché. We were tired from being on the road from hotel to hotel and drove straight through from Montreal to Newton, MA. We stayed with Dan’s parents for a few days while we set up our Waltham apartment. The honeymoon was over. Dan was back at work and I began looking for a job in earnest.