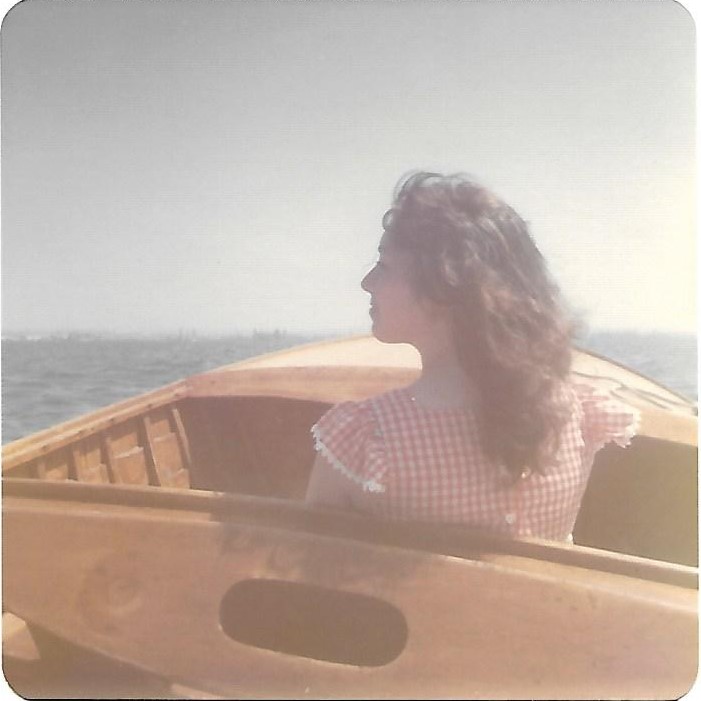 We began our honeymoon with an afterparty at a nearby restaurant. Several of our friends came along from the wedding; we shared some additional toasts at the bar before my brand-new husband and I drove to the airport to begin our long weekend away. Times being what they were, what with my job, his class schedule and a tight budget, we had only planned to be gone for a short time. Our destination: the historic Hotel Del Coronado in San Diego. 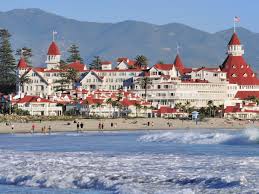 As we walked through the lobby to register as Mr. and Mrs. for the first time, we hoped we would be greeted as experienced travelers, used to staying in grand hotels such as this one all the time.There we were, all of 21 and 22. Who did we think we were kidding? A bellman escorted us to our room and burst our bubble when he asked, “Newlyweds?” Never mind. We smiled and said we were. He  brought in our suitcases, smiled back (or did he wink?) and left us alone.

Because my husband had much more travel experience, he knew the ins and outs of room service, tipping, and all that sort of thing. I’d never stayed in a place like that, hadn’t ever ordered anything from room service, and was kind of awestruck by the whole experience. What a way to start off our life together!

Now, this is the part of my story where things go slightly off script, honeymoon-wise. We discovered that the Giants and the Padres were playing and the game would, of course, be on TV. So we ordered a shrimp platter and settled in to watch the game. Then there was a knock on the door. One of our guests surprised us by ordering a bottle of bubbly to be delivered to our room.  We let the waiter in and watched him set up the ice bucket and glasses. Clearly, we were watching baseball. On our wedding night. After he left, I was mortified that we’d been caught in flagrante, if that can even be a thing in this context instead of the usual one. After I recovered from such an embarrassing moment, we dressed for dinner and went to the hotel dining room. We ordered prime rib—my first time for that too.

I sewed most of the clothes I’d packed for our brief beach honeymoon. No fancy lingerie for me, though. I wore…a thin, black velvet ribbon.

(I don’t have pictures of the nicer things I made. Somehow all the pictures show me wearing what look like maternity clothes. I was not pregnant, just to be clear. Smocks were “in” back then.)

Since we were too young to rent a car, we took a limo to our chosen destination: The San Diego Zoo. I made friends with the goats and did my best koala imitation. 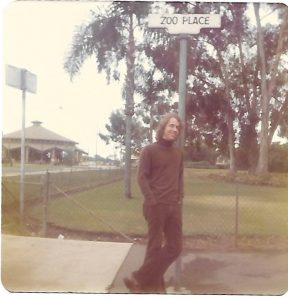 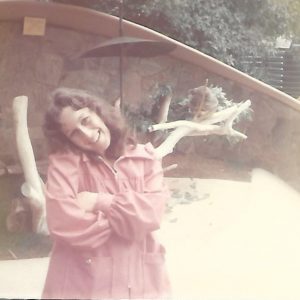 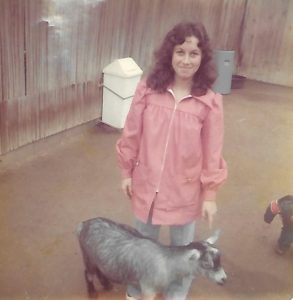 We also rented a small motor boat and tooled around the harbor. We took pictures of each other in the boat and on the dock, but don’t have one single picture of both of us together. Two gold rings glinting in the sun. 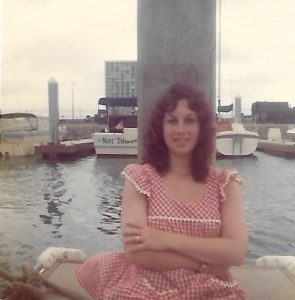 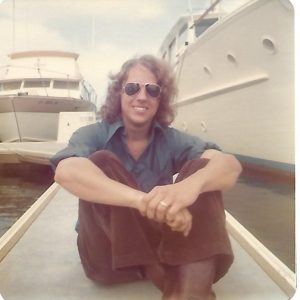 We loved being out on the water and felt so happy to have the wedding behind us.

One more nice dinner at a place across the street, and the next day we packed up to go home.

Newlyweds might wonder when the honeymoon will end. Does it happen right away? Does it ever happen?

When we got back home, we called our parents to let them know we had returned. My husband got his father on the phone. His dad said, “You’d better sit down.” And then he gave us some terrible news.

Tom, one of our beloved guests and a college friend of my husband’s, had stayed longer at the bar. We don’t know how much longer.

He died in a head-on collision on his way home that night. Tom was only twenty-two years old, and the happiest we’d ever seen him. He’d stayed with us the night before the wedding and had left his weathered jean jacket behind. We kept it because we didn’t know what else to do.

We barely acknowledged our anniversary for several years. Too closely linked with the loss of a friend and the lingering sorrow that followed.

This September we will happily mark 46 years of marriage. And we will always remember.

8 Responses to Try to Remember…