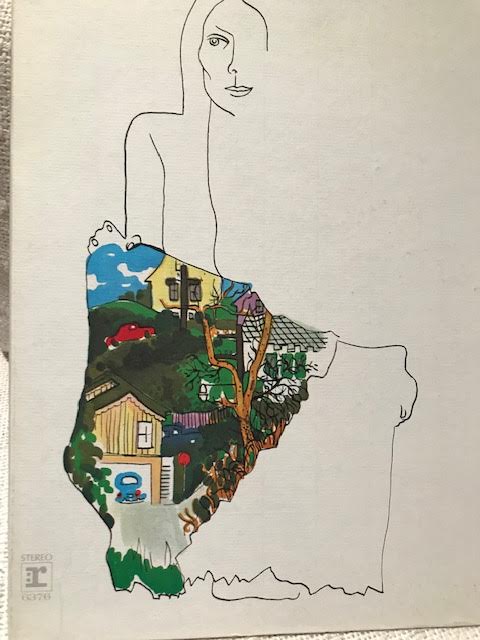 I heard about Woodstock after it happened. It took place during the last weekend of my last summer at the National Music Camp. I was in the northern woods of Michigan with almost no access to the outside world. I was busy performing the final concert of Operetta: we sang songs of Irving Berlin and I won my third and last Operetta Chorus Award. Dude Stephenson and “Father” Ken Jewell sang “A Pretty Girl is Like a Melody”. We campers (who adored both men) were entranced. 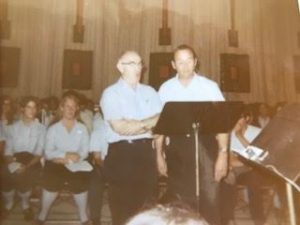 With several others, I sang “There’s No Business Like Show Business”. None of us had Ethel Merman’s monumental voice, but we sure had fun singing it. One of my best friends sang “How Deep is the Ocean”. The songs were gorgeous. My dad took photos from the bleachers. 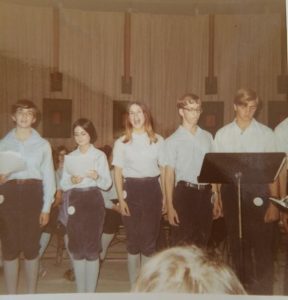 The last night of camp Les Preludes is always performed. Other music is also part of that last World Youth Symphony concert, but the concert ends with the performance of Liszt’s tone poem, with massed orchestras, choirs and dancers all performing at the very end. We, in choir, hum the last few measures, which culminates in a high C. Mel Larimer, who had been my choir director since Intermediate Division, five summers at that point, always called it “murder on the high C” (get the joke?).  It didn’t matter if we sopranos could hit the note because by that point, everyone was sobbing. It was the custom. The program explained that the last concert of the season ended with something that translated to “the beginning” as we were going back to our homes, beginning our lives renewed with our artistic commitment. Lovely sentiment.

I heard about this big, boisterous, music festival in a different part of the country (at this point in my life, I had never been on an airplane) when I returned to high school in the fall. A few people at school talked about it. I knew the music of most of the musicians who performed there. Despite all my mother’s objections, I loved pop and rock music and listened to it on the radio in my bedroom when my door was closed. I particularly liked the folkies, but loved to dance to the other music; I LOVE to dance. So, as I thought about this prompt, I looked through my albums (yes, I still have albums). I have five Judy Collins albums. She and Joan Baez were the queens, as far as I was concerned.

Joni Mitchell was a gifted singer-songwriter. She turned down the offer to perform at Woodstock and wrote the definitive song while watching the TV coverage, realizing what a mistake she had made. Bob Dylan actually lived in Woodstock, but had contracted long ago to perform far away, so missed this life-altering event.

I learned about Woodstock mostly from Joni’s song and the movie documentary. 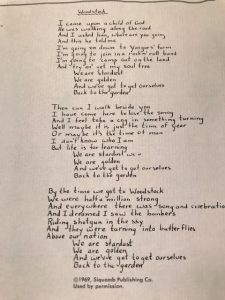 I knew and loved most of the musicians, but only bought some of the albums. Crosby, Stills, Nash (and even Young for the second album; by the way, everyone should see the David Crosby documentary available right now).  I like the first album better. 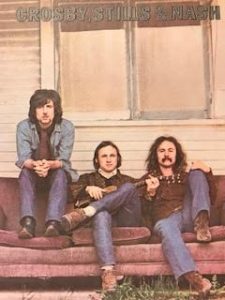 But what an amazing collection of musicians played over three unruly days! Though some died young, they came to define the sound of my generation.

Years later, when my future husband came into my life, I learned that his then-15 year old brother attended Woodstock. My husband still shakes his head in disbelief. “What were my parents thinking?” Gerry was the proverbial rolling stone, always a step ahead in his musical taste and apt to disobey. So off he went. He came home to Newton, MA in one piece with probably lots of stories. I never heard him speak of his experience.

I look at the documentary and am amazed at what transpired that weekend. It was a defining moment for the counter-culture movement and our generation. As a very straight 16 year old, I would not have wanted to be there, historic though it was, but I do love all the music. And seeing all those performers in their prime must have been EPIC!

11 Responses to Dance to the Music