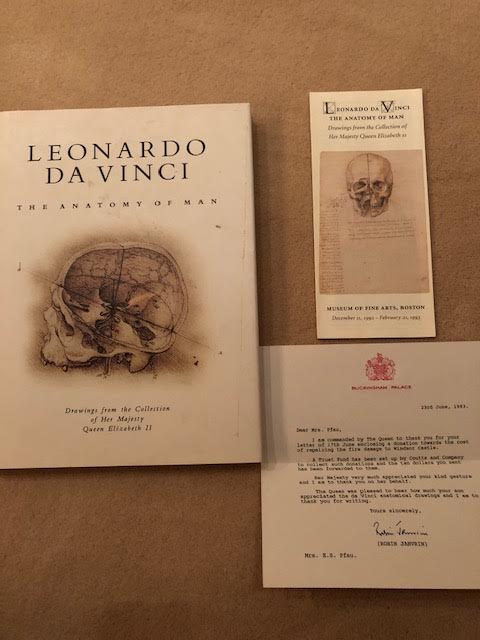 Before David had to devote his Tuesday and Thursday afternoons to Hebrew School, the Boston MFA offered a free art program for elementary school children several afternoons a week, open to all comers. We tried to go on Tuesdays as often as we could. It was funded by a foundation grant and was truly a gift to the children of Greater Boston. Many home-schooled children got their art credits here.

This was in the early 1990s, before another major wing was added to the museum, and long before the major shows had timed, ticketed entries. The children would gather at the Information Desk for check-in and name tags, then were whisked away with the instructor and her helpers into one of the galleries for a close look at the subject for the day, be it a style of painting, type of textile, period of art history for about a half hour.

After, the group went to the studio, they were given good materials and asked to produce some art, inspired by what they had just learned about in the gallery. Occasionally, they worked in the galleries, but not often with these youngsters. David was 7 and 8 when he attended. The entire class lasted an hour and a half. They came home with their finished products. I always marveled at the sophistication of the work and kept David’s for years. 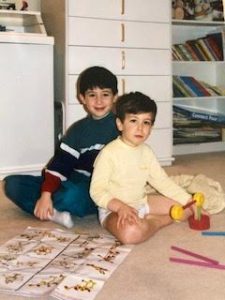 David & Jeffrey playing in Jeffrey’s room during this period

During class time, I stayed at the museum with Jeffrey and we wandered the corridors while David created art. Jeffrey and I learned every nook and cranny of that vast place. I let him lead. As he learned the museum, he had his favorite works that he had to visit each week. After so many weeks, we established a routine. Jeffrey’s taste in art was broad, ranging from the mummies through African masks, Copley’s “Watson and the Shark”,  the ship room with great model ships that he would pretend to go to sea with, the rare instrument room, even Georgia O’Keefe. We went to the gift shop and purchased post cards of his favorite works to put in an album as reminders of what he liked. They had a children’s corner with interesting toys from foreign countries, many open for trial. He’d play with those for a while. Then it was off to the cafeteria for soft serve ice cream. 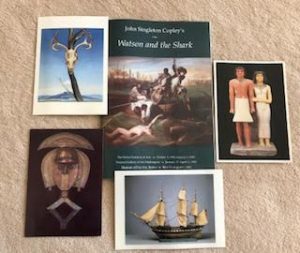 We hung out with a few of the guards who were fascinated by this little boy who seemed to love the art. One would do bird calls and bird-like hand gestures for him. Jeffrey delighted in those. Amanda, who sat outside the studio where David and the other students worked, became our special friend and we talked to her at length. She came to trust us and revealed her life story. She shared her artwork with us. No one was supposed to be in that corridor, but she allowed us to wait there. 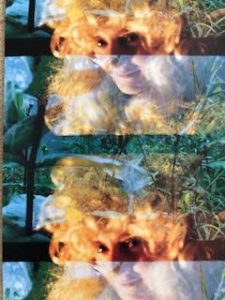 Promotional card with image of Amanda for film by her fiancé

We also saw many special shows, but two stick in my mind. One centered on Peter Paul Reubens, the Flemish painter, and his peers. We were there the day it opened with much press and fanfare. In those days, the local TV stations still had entertainment reporters and the best known personality was in the gallery as we entered.

We were greeted by a huge painting depicting a naked Prometheus, bound on a rock, with an eagle ripping out his liver. Jeffrey was fascinated and asked me what was going on. I knelt to his level and told him the Greek myth; Prometheus had given Man fire, which was only for the Gods on Olympus. As punishment, every day, he regenerated his liver, only to have it torn out again by that eagle. Jeffrey’s eyes grew wide. He took the whole scene in. It was a gorgeous painting, though a frightful scene, rather horrifying for so young a child. He loved it. Meanwhile, the local reporter and her camera crew caught my description on film and we were on the 6pm news; local mother gives her child an art appreciation lesson. 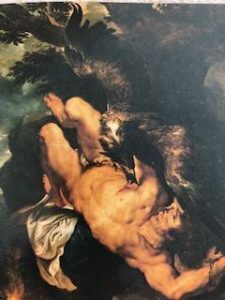 Across the hall was a dual-slide projector presentation of Ruebens and his time, meant as an introduction to the exhibit. We went to see that and the whole exhibit so often, that Jeffrey noticed when the synchronization of the slides was off and we alerted the guard at the door, who had to call someone to adjust it. I think the voluptuous colors and rich details appealed to Jeffrey’s young sensibility.

Another block-buster show that caught Jeffrey up was Leonardo’s anatomical drawings from the Queen’s collection in Windsor Castle. Only a small fraction of her holdings came to Boston, but they are superb. They were in special cases so one could see both sides and were up at eye level for an adult for best viewing, so I had to hold Jeffrey every time we went into the gallery. Other spectators were surprised and charmed to see such a young child be so excited by these old drawings. I remember, even then, he had his favorites. One was the bladder. That made sense because he was toilet training at the time. Another was the female viscera. The third was the cross-section of the skull. He loved this exhibit so dearly that he asked to go even on days when David wasn’t in class. Of course, I obliged. He begged for the catalog for a Hanukkah present that December. Really? He wanted a $60 coffee table art book? That was more than we usually spent for toys. He begged, I relented. He poured through it and could tell me which works were NOT in the Boston show (it had originated in Houston and some works did not continue on to Boston).

One morning in early March, 1993, he awoke in tears. I tried to comfort him. What was wrong? Could we go see the show? No it had left the MFA a few weeks earlier. “I want to thank the Queen for lending us her Leonardos”, he sniffed. I thought about that statement for a moment. “We can do that. I’ll write a letter to her. I’m sure she would love to hear how much you enjoyed the show and would be grateful that you are thanking her for the loan”.

I pondered this for a while. Eventually, I called the British consulate in Boston to learn how to address a letter to Her Majesty (Ma’am, is the proper way). This was a few months after the fire at Windsor Castle and the announcement that Charles and Diana would separate; her annus horribilis. I also enclosed a small amount of money to put toward the renovation of Windsor Castle. Sure enough, weeks later a letter from her private secretary, Robin Janvrin (those who watch The Crown will recognize the name), arrived thanking me for my letter and contribution. The Queen is nothing if not proper. The catalog, flyer from the show and letter from Buckingham Palace are the Featured photo.

David made wonderful art during his visits to the MFA; Jeffrey and I had our own indelible adventures on our days at the museum.

18 Responses to Days at the MFA