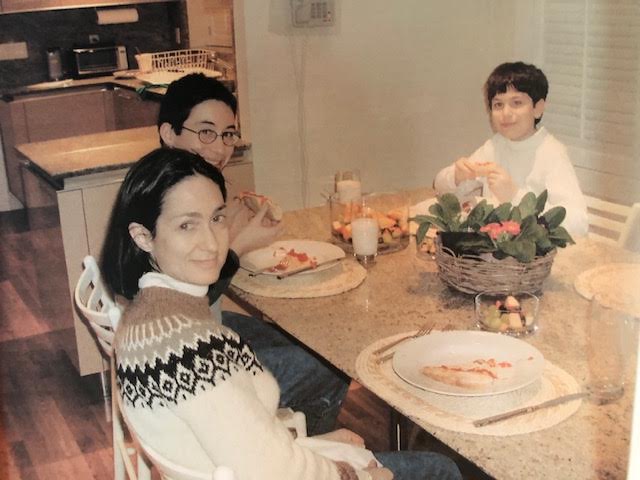 My dad co-owned a car dealership during the early years of my life. He worked six days and two nights a week, so wasn’t home to eat dinner with the family a few nights a week. My mother had a housekeeper who cooked meals in those early years. Those women cycled through, staying a few years at a time. They were all pretty good cooks, something my mother was not. My mother learned some basic recipes from her sister’s housekeeper: roast beef, meatloaf, spaghetti sauce, brisket, some form of chicken, Swiss steak. I hated Swiss steak.

My brother and I were well-behaved kids. We didn’t horse around too much, had good table manners, did what we were told to do. We weren’t perfect. I was a fussy eater. I had to have the crust cut off sandwiches and then the sandwich had to be cut a certain way. But tuna and PB and J were reliable favorites for lunch. On Sundays, we either went out for, or brought in deli from one of two favorite restaurants in Detroit. I loved mushroom barley soup and made a whole meal out of a bowl of it. I still relish it when I can find it.

When Dad wasn’t around, Rick would try to provoke some reaction from me. He would kick me under the table. The best was to get me laughing until milk came out of my nose. Then he had really accomplished something! That would drive our mother to distraction. She didn’t know how to handle such unruliness. By and large, she didn’t have to. We were good kids. We always ate in the breakfast room unless there was company over, or a birthday party. Then the dining room was set with Mother’s fine china, good linens, silverware and crystal. I have it all now, but never use it, not even when I am serving a holiday meal. I don’t have cleaning help to do all the polishing and ironing. 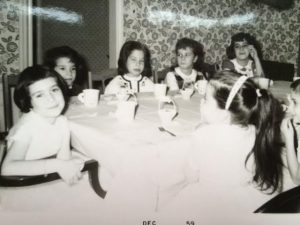 We moved out of Detroit to Huntington Woods (2 1/2 miles west) in 1963. As best I can remember (such things were not discussed with the kids), Dad’s partner wanted out of the business in 1965; Dad didn’t finish paying for the buy-out until the first semester of my senior in college; ten years later, but before then, for various reasons, the business was underwater and he sold it back to Chrysler at a loss in 1967. He went to work for his cousin, who owned a Buick dealership. The housekeeper was gone. Mom cooked all the meals. Rick was gone, meals were very quiet.

My mother barely knew how to cook. She didn’t teach me. She said having me in the kitchen made her nervous. So I was an unskilled bride when I married in 1974. I learned the same basic recipes as my mother, with a few new variations. I worked each day; Dan went to grad school, either came to the office or came home after class and I cooked a meal for us. We ate on the card table; a wedding gift from my parents’ best friends. On Saturday nights, we went to Tony’s Italian Villa on Rt 9 in Newton for homestyle Italian cooking and on Sundays we joined the rest of the Pfau family at my mother-in-law’s table until they moved to New Orleans in 1977.  Then we were on our own. By that time, we had bought our first condo and moved to Acton, very far west of the city. Dan was out of grad school and working in Cambridge. Soon, I would leave for my first sales job in Chicago. Life turned upside down.

In Chicago, I either traveled, so ate in my hotel, or ate modestly in my apartment. I cooked one meal during my 16 months there. On Thanksgiving, I invited a friend over for meatloaf. Other than that, it was lots of “boiled meals in a bag” (before microwaves) or tuna melt on an English muffin. Christie and I frequently got together for dinner and a movie. She and her family made me and ex officio family member. Dan and I visited about every two or three weekends. Those were like little honeymoons and we really enjoyed ourselves, always going out for fun meals (often with friends) when we got together.

When I returned from Chicago, we lived in the Back Bay, both traveled a lot and from then until I had David in 1985, we ate out almost every night. Why not? We were DINKs – “dual income, no kids” and lived in the city. We enjoyed ourselves. In our last condo – 412 Beacon Street – we had several good friends in the building (with the great luxury of a garage in the rear). If I cooked, everyone had to walk past our unit on the way to the elevator. It was like a big frat house – could they come for dinner? Why not? Lots of fun in that building. We all entertained the others frequently.

We moved to our current home in Newton in 1986, when David was 15 1/2 months old. I hadn’t worked since he was born and stayed home a few months longer. As a management consultant, Dan traveled several nights a week. I went back to work when David was 18 months old and I hired a live-in nanny who would often feed David. She was a better cook than I. She taught me how to roast a chicken and made David hand-cut french fries. Once I became pregnant with Jeffrey, I stayed home for good.

Dan traveled 3-4 nights a week, so I did lots of breakfast-for-dinner with the kids. Jeffrey grew into a very fussy eater (part of sensory integration issues along the autism spectrum), so lots of French toast, pancakes, or (much to their liking), McDonald’s. I tried not to do that too often. But Sunday night, I always cooked and we had a nice family meal around the table.

Jeffrey loved pizza, particularly from a chain called Bertucci’s. We noticed they had all the makings in a case by the take-out counter. He begged me to buy the dough and the rest of the fixings so that we could make our own. I even bought a pizza stone for him to cook it in our oven. I helped him spread some flour on the counter top and roll out the dough (we tried to flip it, but never mastered that technique), he spread the sauce, the cheese, and put on some pepperoni. He watched with excitement as it baked up. The Featured photo was one of his personal pizzas, along with fruit salad, so we had something healthy to go with all the carbs. He was always delighted with his effort.

Dan retired in 2002. Jeffrey left for college in 2007. With my kids gone, and Dan retired, I did too and we go out for dinner almost every night now (we brought in during the lockdown). Eating out was Dan’s daily entertain. Getting together with friends or eating out after a matinee movie was better. Now I cook one or two meals a year – when we have family for the holidays.

Here is my table and my cooking the last time I had everyone for Christmas – 2019! I serve buffet, but always try to set a nice table. 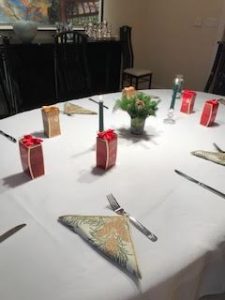 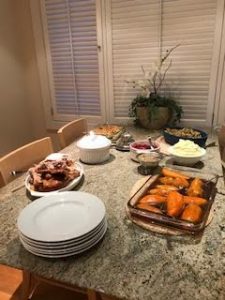 My Vineyard house was on the Edgartown house tour this past August. I set the table with my mother’s silver, Irish linens and Blue Tower Spode china, which works better on the Vineyard than in Newton. Though I would no longer actually eat this way, it does make a pretty table. 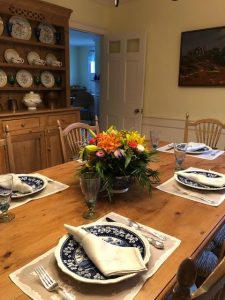 14 Responses to Dinner With a Working Dad