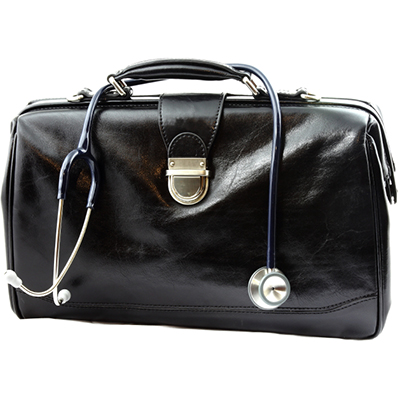 I was definitely spoiled growing up by having all my medical needs taken care of by my father. He was a General Practitioner, what we would now call a Family Physician, so he treated every kind of illness and injury imaginable. And yes, his first name was Robert, although he wasn’t the doctor the Beatles were singing about.

He loved to say "You can trust me, I'm a doctor!" And people did.

His office was attached to our house, so I didn’t even have to go outside to get medical treatment. He had his own x-ray machine, and a darkroom where he developed the x-rays himself. He had tongue depressors and syringes, stethoscopes and blood pressure cuffs, and lots of other gizmos that fascinated me. In the narrow lab area between the waiting room and his consultation room there was a wall with dozens of little drawers filled with medicine samples that he got from the “detail men” as they were called – the pharmaceutical reps who went around to doctor’s offices to convince them to prescribe their company’s medicines. (No such thing as generics in those days.) One of the little drawers had lollipops in it for his pediatric patients, but since I knew which drawer it was, I could snag one any time I was in the office.

He handled his patients’ medical needs from cradle to grave. He delivered babies, took care of them as they grew up, and after they got married, he delivered their babies. He also made house calls when necessary. Often the phone would ring in the middle of the night and he would go rushing out with his black bag in hand, either to the patient’s home or to meet the patient at the hospital. He never got enough sleep.

He gave my sisters and me all our shots. He administered the Salk polio vaccine as soon as it became available in 1955, and then took us to get the Sabin oral vaccine when that came out a few years later. He vaccinated us against smallpox when we were too young to remember it. I’m sure he gave us other shots as well. He also pierced my ears when I was fourteen, and pierced my mother’s ears at the same time.

He “did” my physicals when I needed them for school or camp – or at least he filled out the forms, although he rarely, if ever, did whatever tests were supposed to be done. On my chart, if he had written on a form that I had gotten a test, but I hadn’t really, he would write down the name of the test with the notaton “s/t” which stood for “sink test” – a name presumably derived from the idea of dumping the sample down the sink drain. That way he had a record of the tests he had claimed to have given me, if anyone ever asked.

On the rare occasion when we needed medical care from someone else, we never had to pay for it, because the doctors all gave each other “professional courtesy.” I remember learning that term at a very young age. For the most part, the only other doctors I saw were the ophthalmologist for yearly eye exams (we would never have gone to an optometrist, since they were not M.D.s), and the dentist. The two times I had surgery, for my tonsils and my appendix, it was other doctors who performed the operations, but my father was right there alongside them. Those doctors didn’t charge a fee, and I wouldn’t be surprised if the hospital didn’t either, since my father was on staff.

My father’s patients were always incredibly grateful for the excellent care he gave them. One of his patients, a seemingly ordinary woman who lived in Belleville, had a father or brother who later became President of Guatemala (in a military coup, we realized some time afterward when he was deposed by another coup). My parents were invited to go down for the inauguration, and upon accepting the invitation, they were sent airline tickets and hotel reservations and tickets to all the inauguration festivities. When they got there, they were driven around in a presidential limousine and treated like visiting royalty, because the president was so appreciative of the care my father had given his relative. They had a wonderful time, and brought back three silver necklaces, as well as a woven tablecloth and napkins decorated with white embroidered Aztec or Inca birds for my oldest sister. 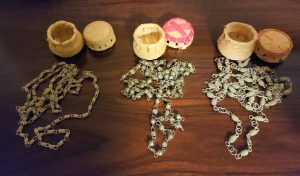 Somehow I ended up with all 3 necklaces

That was the most dramatic example of patient gratitude, but patients were always giving him gifts and showering him with praise. Even now, many years after his death, when I have occasionally written on one of the Belleville facebook pages, and people figure out that I’m his daughter, they go on and on about what a wonderful doctor he was, taking care of their grandparents, aunts, uncles, the whole family, and even saying he delivered them when they were born.

While his care of all his patients was top notch, he gave the absolutely best care to his own family. He may not have always had time for our social events, and he could certainly be grumpy in his role as father, but as soon as he slipped into his role as doctor, he was the greatest! If one of us was sick or injured, he would drop everything to take care of us.

Needless to say, when I grew up and moved across the country, and had to go to doctors who weren’t related to me and didn’t give me special treatment, it was quite a shock! Sometimes I had to wait days or even weeks for an appointment instead of getting immediate attention. However, I am grateful that after law school I took a job with fabulous health benefits, even though it wasn’t something I was thinking about at age 27. Those benefits continue in retirement and for the rest of my life. All in all, I do feel that I have been lucky over the years in finding good doctors and getting good treatment even within the morass of managed healthcare.