This prompt gave me the opportunity to write about my pediatrician, Dr.Elizabeth Torrey Andrews. In a weird coincidence, I googled her and discovered an obituary in the Reed College magazine, the college my younger son graduated from. Dr. Andrews was only a Reedie for one year (1923), then transferred to the University of Oregon, following her father (who was, incidentally, Reed’s first biology professor) when he accepted a position there. She attended the University of California Medical School, Berkeley, then earned an MD from Johns Hopkins University in 1927, specializing in pediatrics.

By the time our paths crossed in the 1950s, Dr. Andrews had worked at Bellevue Hospital in New York and taught at NYU. She published an article in the American Journal of the Diseases of Children based on her research in the “bacteriology, epidemiology, and pathology of pneumonia.” She was married and had two sons, who moved with her to Berkeley in 1940. She held  a position as a physician for the WPA nursery schools in Alameda County, and during WWII she worked part time in the local health department: Rosie the physician.

She joined the Kaiser Permanente Medical Group in Richmond, my home town, in 1950. I remember her as having grey hair, horn-rimmed glasses, a raspy voice, and always wearing a skirt and high heels. She had a no-nonsense approach to medicine and did not suffer fools (or hovering parents) gladly. And I’m sure this attitude made her great at what she did, including starting a teenage clinic. (She retired in 1973, the year I got  married!) Her death is listed as April 16, 2000. My best guess is that she was around 95 years old.

The last time I saw Dr. Andrews, she was sitting on a bench on Russell St. in the Elmwood district of Berkeley. She was quite old by this time, and I believe she was smoking a cigarette. I approached her, as I’m sure hundreds of her patients had done over the years, and introduced myself. She nodded and smiled and didn’t disagree when I said, “I bet you don’t remember me, but I was your patient…” Considering that I had a near concussion, two broken arms, allergies, tonsillitis, pneumonia, and occasional bouts of croup–she might have remembered me, but I’ll never know. She was my doctor until I was in my early teens, and I had great respect and affection for her, despite her sometimes gruff manner. I couldn’t imagine her being anyone’s wife or mother, the way children often feel about their teachers. She was simply Dr. Andrews, and probably lived at the hospital. 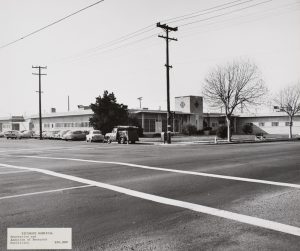 Dr. Andrews must have been a force to be reckoned with to have accomplished all she did during her lifetime. The Reed obituary also mentioned that she was “an elected member of the Alameda County Democratic Central Committee for many years,” and that she “traveled extensively throughout Central America and Europe.”

I wonder how many times she broke the glass ceiling in her professional career. I can see her now: white coat, high heels, red lipstick applied in a slapdash manner (probably smeared from her last puff on a cigarette), looking at me over her glasses and telling me to say “ahhh.” I wonder what she thought of this mischievous, accident-prone little girl she took good care of for so many years. Even though she didn’t (couldn’t possibly) remember me, during that chance encounter in Berkeley I wanted her to know I remembered her and was grateful to her for being my doctor. I’m glad I got the chance to tell her.

15 Responses to Dr. Andrews: A Trailblazer