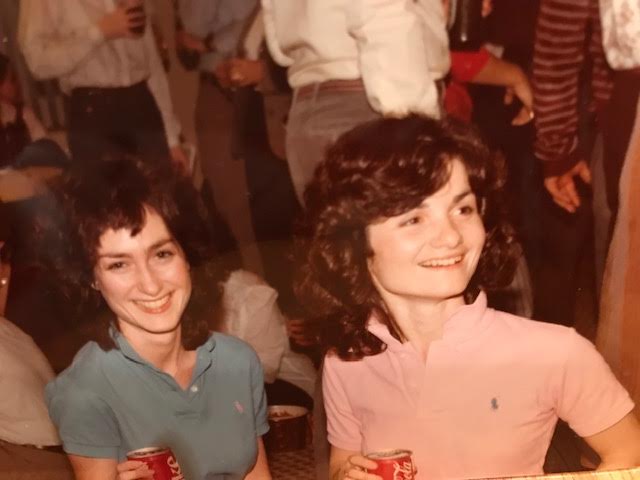 I have never been much of a prankster. I don’t like having them played on me, usually don’t find them funny and am not creative in thinking them up. So this is a difficult prompt for me. I never created mischief on Halloween, or any other night, for that matter.

The closest I came was while working for Management Decision Systems in the early 1980s. They held an annual Christmas auction to benefit wonderful charities like the Globe Santa and Home for Little Wanderers, spreading Christmas cheer for needy children and had a great time doing it. The auctioneers dressed up in crazy ways and we all imbibed lots of alcohol. Creative things were auctioned off for large sums of money (we were young and all doing well, professionally. The flowing alcohol always kept the bidding going too).

I was friendly with another petite woman. We didn’t really look alike at all, except in stature and our dark hair, but clients sometimes mistook us for one another. We plotted up an auction item: dinner with the “DSS Twins” and did not reveal our identity to any one. Decision Support Systems were our major products.

As the auction approached there was much buzz about who those twins were. We didn’t let on until moments before our item came up for bid, when we changed into matching shirts and I combed my hair like Connie’s (the Featured photo, from 1982). Our item was announced and we came forward. We came to feel just a tiny bit like slaves felt in a slave auction, as people bid to have dinner with us while we were on display. I think we fetched a tidy sum and were happy that we had contributed to the overall success of the fundraising efforts. As best I can remember, who ever bought the dinner was so busy, that he never collected on his win (I’m sure it was a male high bidder)!

The next year, we upped our ante. This year, we offered to take a jacuzzi and home cook dinner with the DSS Twins (I had a large jacuzzi tub in my Back Bay condo). Of course, now everyone knew who the DSS Twins were, so Connie and I had T shirts made with our names, but wore each other’s shirts. 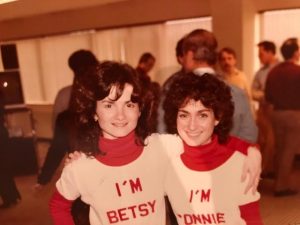 I think the offer to take a jacuzzi with us drove up the bidding and the item was won by the head of Tech Services, Jeff Stamen. I was quite friendly with him, but was still surprised by the amount he paid, though I don’t remember the sum now.

Again, busy schedules made it difficult to get us all together. I left the company before Jeff could collect, but stayed close to everyone involved. He did collect his dinner and soak, but not until 1985 and I was 8 months pregnant by the time of the reward (we cooked veal piccata, my speciality at the time) and couldn’t soak in the tub by that point, but of course, I do have photographic evidence of the evening, one month before my due date! I was a whale by that point. I eventually put on 42 pounds. 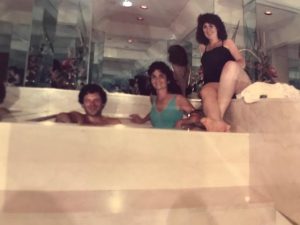 We all had a great time. We stayed in touch for a while, now occasionally even through Facebook. The next year, Management Decision Systems was sold to Information Resources, Inc., which was eventually swallowed up by Oracle.

I’m the Sucker Who Falls for Practical Jokes, and I Hate It
by Laurie Levy