Prompted By Quick Take: How Is This Still a Thing?
4 comments. 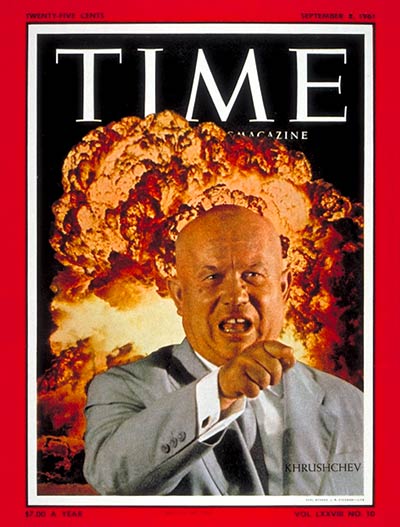 I’ve spent a lifetime dealing with nuclear warfare. I’ve watched nuclear proliferation sell newspapers and decorate the covers of Time magazine since I was seven. I’ve watched the military-industrial complex create a paper tiger out of the Soviet Union and suck the public coffers dry with their deceptions.

Duck and cover seemed the height of folly, and I'd never felt immortal.

I watched the Nevada desert light up with a nuclear test, televised with great joviality by NBC’s  morning show talk host Dave Garroway and his simian sidekick, J. Fred Muggs. Killing the Rosenbergs for allegedly trading nuclear secrets didn’t help. The Rosenberg executions hit hard — my parents had both been members of the Communist Party like the Rosenbergs. Were we guilty by association?

The Khruschev-Kennedy kiloton dual delivered more fiery fears based on a seemingly brainless need to proclaim that our bomb was bigger than their bomb. Oh… and it costs lots to build bombs.

These early threat-fests terrified me. Duck and cover seemed the height of folly, and I’d never felt immortal. We were all going to die in a millisecond of blinding light.

At fifteen, I began protesting nuclear testing with the Quakers. I was sure that our international efforts would raise awareness, offer resistance, and eventually ban nuclear proliferation. Nice work if you can get it.

Apparently, the nuclear terror I experienced during those episodes served as an inoculation, a vaccine against future terror attacks. By the time the much-reported Cuban missile crisis arrived — the orgasm of the Kennedy – Khruschev dalliance — I had developed a healthy skepticism about the threat of nuclear holocaust. I couldn’t accommodate the fear any longer.

As the missile crisis climaxed in October ’62, I wrote a message on the wooden bottom of my dormitory desk drawer: “If you read this, you haven’t been blown up by a nuclear attack. So hey… how’s it going?”

I laughed when India and Pakistan began their dueling demolitions in the 1990s. Gandhi’s spirit hovered over me, winking at the pretty girls and spinning, comforting my helplessness with a longing for peaceful civil disobedience. Worked for me.

By the time the horrendously lousy liars of the Cheney Administration tried to convince me that the evidence of aluminum rods (actually shower-curtain rods) and yellow-cake uranium (not) merited America’s invasion of Iraq, I had had it… again. Weapons of mass destruction my ass. I knew there was nothing there. Why didn’t they? They did, but a helluva good way to please Daddy Warbucks, stomp on a major oil competitor, and grab Iraq’s sludgy fossils. 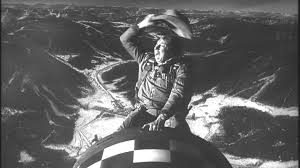 Now we’ve got two new lunatics waxing profane about nuclear bomb[l]ast. I don’t have a dormitory drawer to write in and my message is different, so this post will have to serve as witness to my position on more dueling nuclear dicks: Is this still a thing? Really? Do we need another Slim Pickens to ride the bomb down?

Enuf o’ this shit. No more fear. Either we’re ready for the sixth extinction or somebody, somewhere, sometime, will read my proclamation. Peace.

4 Responses to Enuf o’ this Shit

Highway to Hell
by Suzy