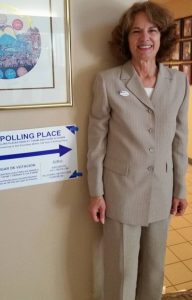 Wearing pantsuit to cast my vote for Hillary Clinton

I began this story on Monday, November 7. Here was my first paragraph:

I am starting to write this the night before the election. The anxiety and suspense are palpable. Perhaps by the time I finish it, we will have elected our first woman President.

I then wrote a few paragraphs about the political views of my parents and grandparents, and the development of my own political views, dutifully following the suggestions of the prompt. I got interrupted and never got back to it that night or the next day. Then the political roof fell in Tuesday night. In the aftermath of the shocking election results, I am trashing the whole thing and starting over.

I am so angry now, The only other time I can remember being this angry was when Clarence Thomas was confirmed by the Senate for a seat on the Supreme Court in 1991. I was listening to the voting on the radio in my office, keeping count of the “yea” and “nay” votes as they were cast, and when I heard the 51st “yea” I picked up a heavy desk calendar and threw it at my office door so hard that it made a big gash in the wood. Maybe if I threw something now it would make me feel better.

I have certainly been through many other disappointing election nights. McGovern, Mondale, Dukakis, Kerry are all names that come to mind when I think of candidates I supported who didn’t win. Then of course there was Al Gore, who actually DID win in 2000, but had the election stolen from him by the Supreme Court. That was infuriating, but it didn’t happen on election night. The whole thing dragged out for over a month, from the election on November 7 to the Supreme Court decision on December 12. Of course I was angry about that, but it still feels like this defeat hurts more. Maybe it’s just the passage of time, that I don’t remember how awful I felt 16 years ago, but really I think this is worse.

The idea of having a woman President was so incredibly exciting. Not just any woman of course, I wouldn’t have felt this way about Sarah Palin. I have admired Hillary Clinton ever since she first appeared on the national scene when Bill was running for President. I adored Bill, and found him tremendously charismatic, but I always suspected that she was the brains in the family. She was amazing as First Lady (“Human rights are women’s rights, and women’s rights are human rights”), and she would have been even more amazing as President, demonstrating, as we have always told our daughters, that women really can do anything.

On the night of the California primary back in June, I was chatting with a friend, exulting over Hillary’s primary victory, and literally jumping up and down with excitement. The final night of the Democratic Convention in August, watching her make her acceptance speech, was even more exciting, and inspiring. And last Tuesday, when I put on a pantsuit in honor of Hillary, and went down the street to vote, I was so overflowing with happiness and excitement that I was ready to burst. I posted my pantsuit picture on facebook, and people commented about how fabulous I looked, what an exciting day it was, etc. Even the poll workers told me I looked great! It felt like the best day of my life. Everyone I knew was voting for Hillary. And all the polls were saying she was going to win. And her opponent was so much worse than any other Republican candidate in my lifetime, or maybe ever. For so many reasons this defeat was a bigger blow than I could handle, and I’m still not dealing with it very well.

In 1968 I wasn’t old enough to vote, but if I had been, I might have voted for Richard Nixon as a protest against Hubert Humphrey and the Chicago debacle I had been part of, or I might not have voted at all. While the idea of voting for “the lesser of two evils” has probably always been around, it was in 1968 that the phrase “there is no lesser evil” was coined. Better not to vote for either of them. Many of my most radical friends were advocating voting for 3rd party candidate George Wallace, because he was SO awful, and SO racist, that his election would surely bring on the Revolution we were all hoping for.

That didn’t happen 48 years ago, but maybe the time is now.

8 Responses to Eve of Destruction