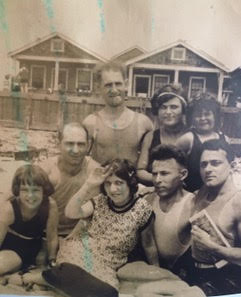 My cousin recently sent me this picture, which I had never seen before, taken around 1925.

My cousin recently sent me this picture, which I had never seen before. It must have been taken around 1925 or so. When I commented that it had green streaks on it, and asked if it was the original, she said it was a photo of a xerox of the original, and that she has the original somewhere safe (but I have a feeling she doesn’t know where that safe place is).

I love looking at this picture. In the back row, perhaps kneeling, is my grandfather and my grandmother holding my mother, who must have been about four years old. In the front row, seated, is my aunt Daisy, about nine years old, then my grandfather’s two brothers, Abe and Pinky, on either side of Pinky’s wife Pauline, and my grandmother’s brother Sam on the right. They are obviously at the beach somewhere. And although none of the men are smiling, they still look like they are having a good time.

I actually remember meeting all three of those uncles many decades later. We went to visit Sam and his wife Rose somewhere in Brooklyn or the Bronx (it seemed like the other side of the moon to me, coming all the way from New Jersey). Abe and Pinky came to our house several times to visit my grandfather, and they all went to Workmen’s Circle meetings together. (For more about my grandparents, and Workmen’s Circle, see Those Were the Days, My Friend.)

Another writer, in describing a group photo, said “It gives the lie to any assertion that group photographs, as a genre, are stiff or staid or a matter of meaningless formality.” My response to that is that no such assertion has been made here at Retrospect, if indeed it has been made anywhere. Certainly we would not have chosen this prompt if we felt that way about group photos. Indeed, far from being meaningless, as Rod Stewart tells us, every picture tells a story.

8 Responses to Every Picture Tells A Story