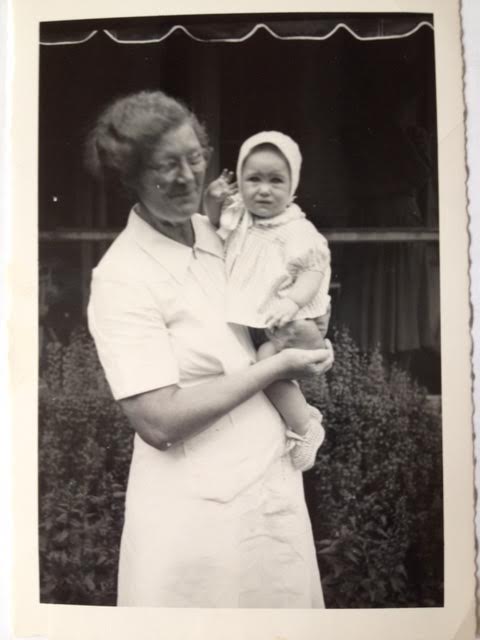 I had a Scottish nurse when I was a baby. She called me her “wee little treasure” and gave me dolls that said, “Frae Bonnie Scotland” on them. Her name was Jean James but I called her Jean-Jean. I loved the way she spoke and the way she cared for me and my brother. Because of her, I always dreamed of going to Scotland. It seemed so romantic and fit perfectly with my interests in Tudor England, given the connection with Mary, Queen of Scots and Elizabeth I.

Exactly three years ago at this time we took a very fancy golf cruise to Ireland and Scotland. I don’t play golf at all, but never mind that, there was wonderful touring for those dozen of us who didn’t golf and we formed a close bond. Of course Scotland is where golf was invented and has some of the most famous and difficult courses in the world. We sailed on the Sea Cloud II, a larger, luxurious reproduction of the original yacht, built by E. F Hutton for his wife, Marjorie Merriweather Post. There were 79 passengers with a crew of 65. We felt quite pampered. 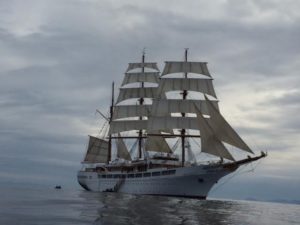 We boarded in Dublin, after our group saw the Book of Kells and continued on to Belfast, seeing where the Titanic was built and the memorial to those who lost their lives. Then on to Antrim along the rugged coast where we hiked. A day spent at sea, the high point included a wonderful demonstration of the crew setting the sails as the captain explained the name and use of each. The British Open was in full swing on this day and was picked up on satellite in the lounge during the day, so many watched that. We were allowed to tour the entire ship including the engine room. We mostly sailed under power, as we had tight schedules each day and the tour was run like clock-work.

We arrived in the Scottish Highlands the next morning and were greeted by a lone piper. I was so excited, I videotaped his performance. While the majority of the group went off to play a challenging golf course, we few ladies went to the Inverness Highland Games. We saw a lovely demonstration of Highland dancing, wandered around the equivalent of a state fair, saw some very rough men in orange-hued kilts. I started to speak to them until I noticed all the curse words on their tee-shirts, realized they were drunk and from the Netherlands. These guys took caber-tossing seriously! Our group decided to shop in town.

Over the next several days, the ship would go from port to port while we slept and we would tour during the day, seeing incredible estates and country towns. One notable estate was the ancestral home of the Sutherland clan. The gardens were magnificent, the carpet was their clan tartan, photos of the royal family in silver frames were sprinkled around the rooms. We had a private luncheon in a large room of salmon, caught on the estate. I started having salmon at every breakfast. There is nothing like salmon from Scotland! In the afternoon, we had the most fantastic exhibition of falconry, as wild birds with huge wing spans swooping overhead.

Our last day was spent in St. Andrews, the birthplace of golf. We saw the university. Our guide pointed out the apartment that Prince William and Kate Middleton had shared as undergrads. We saw Old Tom Morris’s grave. He laid out the St. Andrews golf course and made many improvements to the game, as did his son “Young Tom” Morris, who is buried beside him. Baby Prince George was born that day, and we were in the spot where his parents had met and wooed. How perfect. We spent the night in a room over-looking St. Andrews, the most famous, oldest golf course in the world, though our tour didn’t play it. Still, Dan and I walked part of it and looked at some of the famous sites as the sun set. I later learned that the famous running scene in “Chariots of Fire” had been shot on the shore just beyond the course. The place has romance about it. 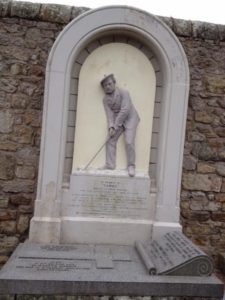 On our own, Dan and I spent a few extra days touring Edinburgh, as I wanted to see everything I could that had to do with Mary, Queen of Scots. We visited Holyrood House Palace, still a functioning home to the Queen when she comes to Scotland, and Edinburgh Castle. We walked the “Royal Mile” and visited other museums. We soaked it all in, as I do not know if I will ever return. One museum had an exhibit devoted to Mary, Queen of Scots and included the famous “Armada” portrait of Elizabeth I. I couldn’t believe that I was seeing it in person, as I’ve seen it so many times in so many of the biographies I’ve read of her.

Scotland did not disappoint and the trip lived up to all my expectations. It may be golf mecca, but it had all the charm and history that I sought as well.