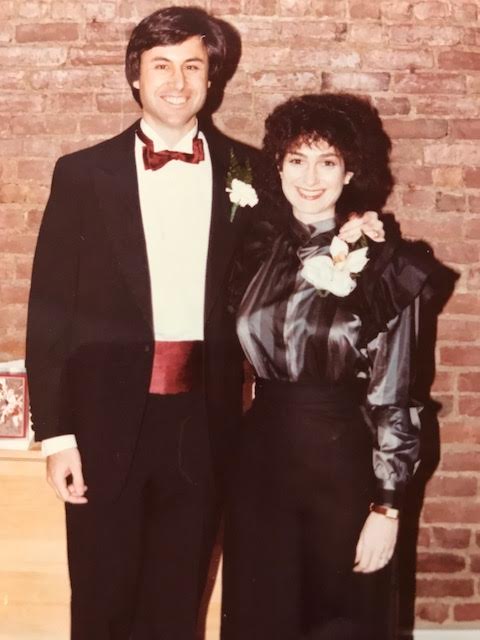 I grew up eating simple, 1950s food. On Sundays we went to, or brought in from, deli food from Detroit delis, either Billy’s or Darby’s. My favorite was getting a large bowl of mushroom barley soup. Like Proust’s madeleine, I still search for soup as delicious as the one from my childhood. I have found none that can compare.

For birthdays, special occasions, or before going to theater downtown, there were special occasion restaurants. I have cherished memories of eating at Larko’s, a family favorite Italian restaurant. We even ran into one of my dad’s brothers and his wife on one of my birthdays after seeing Gigi, an all-around lovely evening. Fine dining meant Carl’s Chophouse, with plentiful rare roast beef.

On our wedding night, Dan and I stayed at the Hotel Pontchartrain, a very fine hotel, on our way across the Ambassador Bridge into Canada. One of my uncles paid all our expenses. Our wedding was at 1pm and only provided light food, champaign and dessert. After checking in, we went to the dining room and ordered chateaubriand, an expensive steak for two. The waiter, white napkin over his arm told us that was a “cool deal”, and it was, indeed, a memorable meal.

We married in 1974, moved to the Boston area and scraped by. Our one night out was going to Tony’s Italian Villa in Newton for family Italian food; veal parm for Dan, spaghetti for me, though I make good home-made pasta sauce myself. Still, it was nice for someone else to do the clean-up.

As the years progressed and we became more prosperous, with two other friends, we developed the routine of going out for luxurious birthday dinners, no holds barred. We lived in Boston proper and were “DINKs; “Dual Income, No Kids”. The Featured photo is on my way to my 30th birthday dinner. You can see that Dan provided me with a corsage and we are dressed to the nines. We were walking distance to the restaurant, L’Espalier, which at the time was around the corner from us on Gloucester St. It was known for very fine French food and an exquisite dining experience. It still exists, though now has moved around the corner and is inside the Mandarin Oriental Hotel; still fine and exquisite. We haven’t been in more than 30 years.

One memorable birthday dinner (the guys always did right by me) occurred a year or so earlier. I had come home, tired from work, but Dan stalled me, telling me not to get out of my suit (this was still the “dress for success” era). We lived in the Back Bay in a 5th floor walk-up and there were no cell phones, so no easy way to communicate with the ground floor. At some point, the buzzer rang, Dan hustled me down the steps. A limo awaited, with our friends inside. Also a TV! We drove to Portsmouth, NH to the chic restaurant of the day; The Blue Strawberry, but had to watch the Celtics game as we drove! I think I slept most of the way up. With Friday traffic, it was a 90 minute drive. The restaurant was small and superb. The guys had read about it and made reservations months in advance. Worth it!

When Dan retired almost 16 years ago, my cooking days came to an end as well. We are empty-nesters and eat out almost every night, but not special. Mostly at the local diner/deli, Johnny’s in Newton Center, where I took my Retrospect (and now, in person) friend Suzy, when she visited last fall. It has passable food. They know us so well they put out my water and Dan’s Diet Coke as soon as we are seated. Fine dining is limited to eating out with friends, which happens a few times a month, or when we travel. So I have come full circle, though my eating habits are better than when I was a child, I eat at similar restaurants.

9 Responses to From the Sublime to the Ridiculous