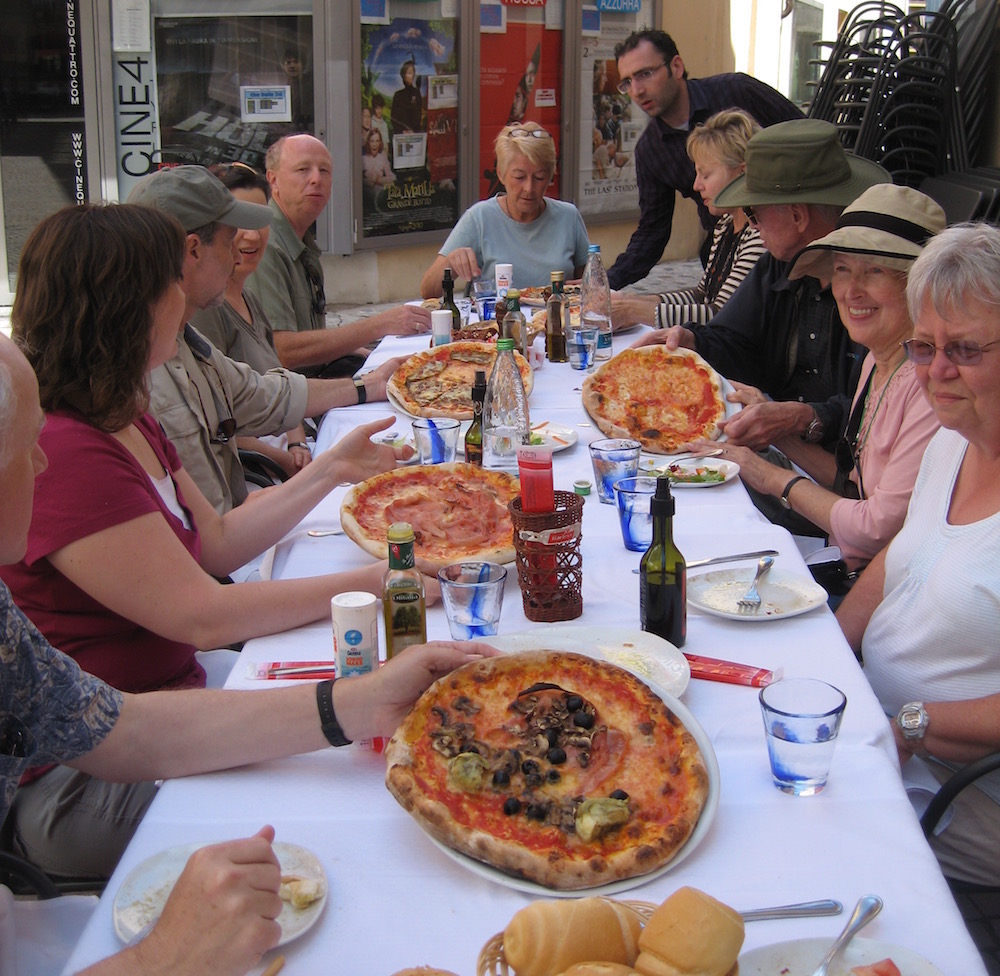 It was near the end of our Italian tour in 2010. Our intrepid band of 14 Stanford-affiliated food-lovers had begun in Rome and meandered northward through Umbria, Tuscany, Cinque Terre, and now Piedmont, staying in small towns and avoiding the big cities. Our fearless leader, Alessandra, had guided us through countless churches and museums, of course, but also arranged tours and tastings of wine, olive oil, cheese, and chocolate, and classes in making pasta and tiramisu. With the help of our Slovenian driver Boris, who could navigate our bus down steep switchbacks that would be treacherous even for a car, Ale took us to unknown (but fabulous) restaurants where she bantered with the proprietors who cooked us special dishes. It was almost like she had grown up there—which she had, in Umbria, where she would have been a marquessa if Italy hadn’t abolished the nobility—though she now lived in Portland, Oregon with her American husband.

Patti and I simultaneously glanced up a side street, spotted a pizzeria, and nodded knowingly at each other.

Around noon we arrived in Alba, a bustling commercial town. Boris dropped us off at the bottom of town and Ale guided us up the main drag toward the cathedral. We were on our own for lunch, so she pointed out a few possible cafés as well as some interesting shops. About halfway up, Patti and I simultaneously glanced up a side street, spotted a pizzeria, and nodded knowingly at each other. Two weeks in Italy and we had not yet had pizza. It was not on Ale’s recommended list but, you know, pizza.

By the time we finished the tour and Ale left us, we were famished. We told another couple about the pizzeria and they agreed to join us. But when we arrived back at the restaurant, the owner said they were about to close. “Just two more pizzas?” we pleaded, doing our best to make ourselves understood through the language barrier. He agreed.

Then a couple more of our group arrived. Then more and more, until there were eleven. The owner sighed, pulled together their outdoor tables, sat us down and gave us menus.

Eleven is a lot of people when you’re hungry. It seemed to take forever to decide what we wanted—we ultimately decided that each couple would order their favorite pizza—and then a second forever for the owner to take our orders. When the salads came, we practically attacked them. Fortunately, Carolyn had the presence of mind to take a picture before they disappeared. 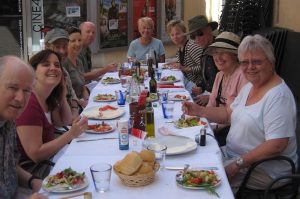 Another interminable wait, although the salads had taken off the edge. And then, finally … six pizzas right out of the oven. Even outdoors, the aroma was overwhelming. We held back long enough for Carolyn to take another picture, and then dug in.

It was heavenly. The crusts were thin and delicate, the sauces savory, the toppings simple but fresh. There was enough for everyone to share. As we passed around the platters, the mood became convivial and relaxed. We could get good pizza in California, of course, but this was like pilgrims coming to the source. This was the Ur-Pizza.

An hour or so later, sated and happy, the eleven Comrades in Pizza made our way back to Ale, Boris, and the bus. I felt giddy that, on our own, we had found a restaurant that gave us all such pleasure.

Almost eight years later, I can still recall spectacular food from that trip: a selection of bruschetta grilled over an open fire in Bagnoreggio; scrumptious tiramisu Ale assembled (with our help) in her family’s villa in Gubbio; to-die-for vegetarian lasagne in Bagno Vignone; savory agnolotti del plin in Castiglione Tinella. But that simple pizza takes its place among the culinary highlights of our Italian tour.

Grazie mille to Carolyn who took all the photos (and thus doesn’t appear in any) and to Alessandra who is still organizing fabulous tours of Italy (and many other destinations) at customizedjourneys.com.