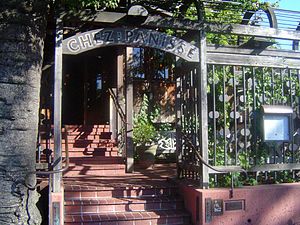 In 1971, I was living in Berkeley, California. I attended classes on campus and also worked there as I put myself through school at UC Berkeley. I lived in a house with three roommates, a large tank of tropical fish, my two cats, and an Old English sheepdog.

My boyfriend spent his freshman year away, but had then transferred to Cal. Most days we went to class and/or to work, and had the occasional weekend date night. Or, we would throw dinner parties for our friends because we enjoyed cooking together–something we started doing once we’d become an “official” couple in our senior year of high school.

We heard about a new restaurant just up the street from my house on Shattuck Avenue. Word got around that it was pretty good. We decided to give it a try. The place had a fancy French name, Chez Panisse, but looked like just another brown shingle arts-and-crafts-style Berkeley house. Although we didn’t know much about the restaurant, other than it sounded French, we’d heard some things about Alice Waters, the co-founder and chef. 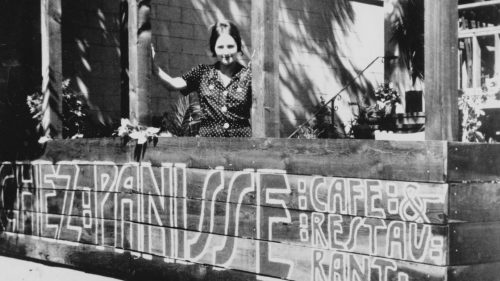 For our big evening out, I wore one of my favorite Gunny Sax dresses. The dress was, coincidentally, Alice blue, with long ecru lace sleeves and a bit more lace on the bodice. With my long, flowing dress–and my boyfriend’s long, flowing hair–we fit right in with the hippie ambience of the place. None of the flatware matched, nor did the plates or glasses. This was a restaurant that obviously cared about the food and its preparation, but didn’t get hung up about stuff like matching china. In fact, it reminded me of cooking at my place, where we certainly didn’t have enough of any one thing to set a table for eight. 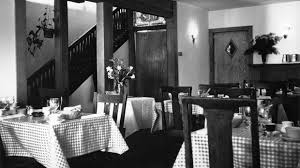 How I wish I could remember the meal we were served! But I know we enjoyed the dinner–even without the wine we were too young to order. We felt as though we were part of something new and innovative; Chez Panisse, for all its French culinary influences, was nothing like the pretentious old- school fancy places we’d gone to with our parents on special occasions.

After dinner, we were presented with the check–and there was an awkward moment while my boyfriend counted the cash in his wallet. We were also too young (and were on shoestring student budgets anyway) to have credit cards, so it came down to paying the bill and not having enough left to leave a respectable tip. We slipped out, a little embarrassed. He swore he would return the next day with tip money. Which he did. His parents raised him right.

In the intervening decades, Chez Panisse gained a world-wide reputation for its locally sourced food, its innovative menus, and the notion of California cuisine– which resulted in celebrity status for Alice. The restaurant also proved to be a training ground for generations of talented chefs who started out at the bottom of the ladder, worked their way up, and then moved on to their own careers in the restaurant or food business. Chez Panisse and Alice Waters as its executive chef were pioneers in using ingredients that were locally, organically, and sustainably grown. The restaurant is in the heart of what became known as the “Gourmet Ghetto” in Berkeley.

We’ve been back to the restaurant (and to the cafe added to the upstairs later on), many times–often to mark a special birthday or anniversary. Now, of course, reservations are harder to come by than they were in the early days. Alice has had to build and rebuild after a couple of fires caused a great deal of damage to the structure. Most recently, she was able to track down one of the original guys who worked on the restaurant in the ’70s for the necessary renovations and repairs.

A couple of years ago, I spotted Alice Waters in Telluride, Colorado at the Telluride Film Festival–which also has roots in Berkeley. As we walked along the same path, I said hello and that I wanted to share a story about my first dinner at Chez Panisse, which would have to include the unfortunate financial debacle that followed. When I got to the part about leaving without tipping our server, she raised an eyebrow. “But he went back the next day and took care of it,” I said. “And are you still with this guy?” she asked. I said yes, and that we had just celebrated our 43rd anniversary. “Come back on your 45th,” she said with a smile, “and make it special.”

That anniversary is coming up in September. I may try to find something long and flowing to wear, and maybe my husband can grow out his hair by then for old times’ sake. No matter what, if we go back to Chez Panisse, it will be special.