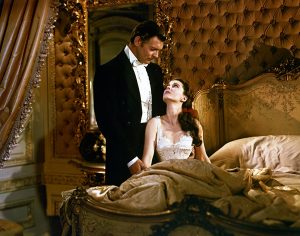 I first read the book when I was a teenager. It’s the only book I missed two meals to finish. I staggered out of my bedroom late in the afternoon after turning the last page. I’d been lost for what seemed like days in the lives of Scarlett, Ashley, Melanie and Rhett. My parents must have given me a free pass for the day (it had to be a weekend) because I don’t remember being disturbed other than by a quick parental peek to see if I was still breathing. It’s fitting (or maybe, as Mammy would say, “It ain’t fittin.’ It just ain’t fittin’!”) to mention that I have read this book more than once, and  each time I read something more into the story and have a slightly different take on the characters. When I went to see the movie, I already had a vision of what all the characters looked like. But my imagination was no match for what I saw on the big screen! (If you haven’t seen the movie, I can’t help you– spoilers will follow.) 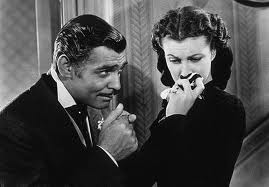 How could anyone besides Clark Gable play Rhett? The moment he first appears on the screen at the party at Twelve Oaks, you could hear a deep sigh of longing from every woman of any age in the theater in San Francisco where I saw the film for the first time: teenagers like me, and mothers and daughters– and probably grandmothers too– we all swooned at the scandalous Rhett Butler.We had him pegged as the kind of bad boy who pulls women toward him like a magnet– and he makes you feel like he knows what you look like under your shimmy!!   And when he carries Scarlett up the stairs… but before that when he tells her she needs to be kissed and kissed often by someone who knows how, 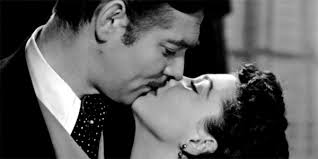 and when he tells her he loves her and he’s waited for her longer than he’s waited for any woman…and all the heartache and loss when little Bonnie dies and Mammy has tears running down her cheeks; and the things they say to each other make my blood run cold, and they’re just mules in horse harness, and I don’t know nuthin ’bout birthin’ babies …and the political meeting behind Mr. Kennedy’s store and Belle Watling’s dyed red hair, and that green dress with gold fringe that doesn’t fool Rhett for a moment, because look at her hands. Great balls of fire and fiddle dee dee!

And then at the end when Melanie dies and Ashley is such a wimp after all and Scarlett runs home to Rhett, but it’s too late and you want to grab them both and shake them, but he’s out the door and into the mist and says, well you have to know what he says here: 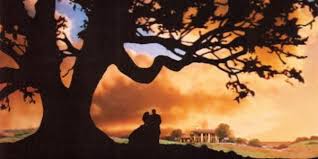 As God is my witness, I’ve never seen anything to equal the grandeur and scope of that movie. Scarlett in that red dress, with plenty of rouge. The opening scene with her in full southern belle mode, surrounded by all those young men.That heart-stopping moment when she watches her daughter on the pony and says, “Just like Pa…”

But first, one more look: 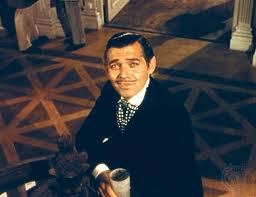 7 Responses to Gone with the Wind