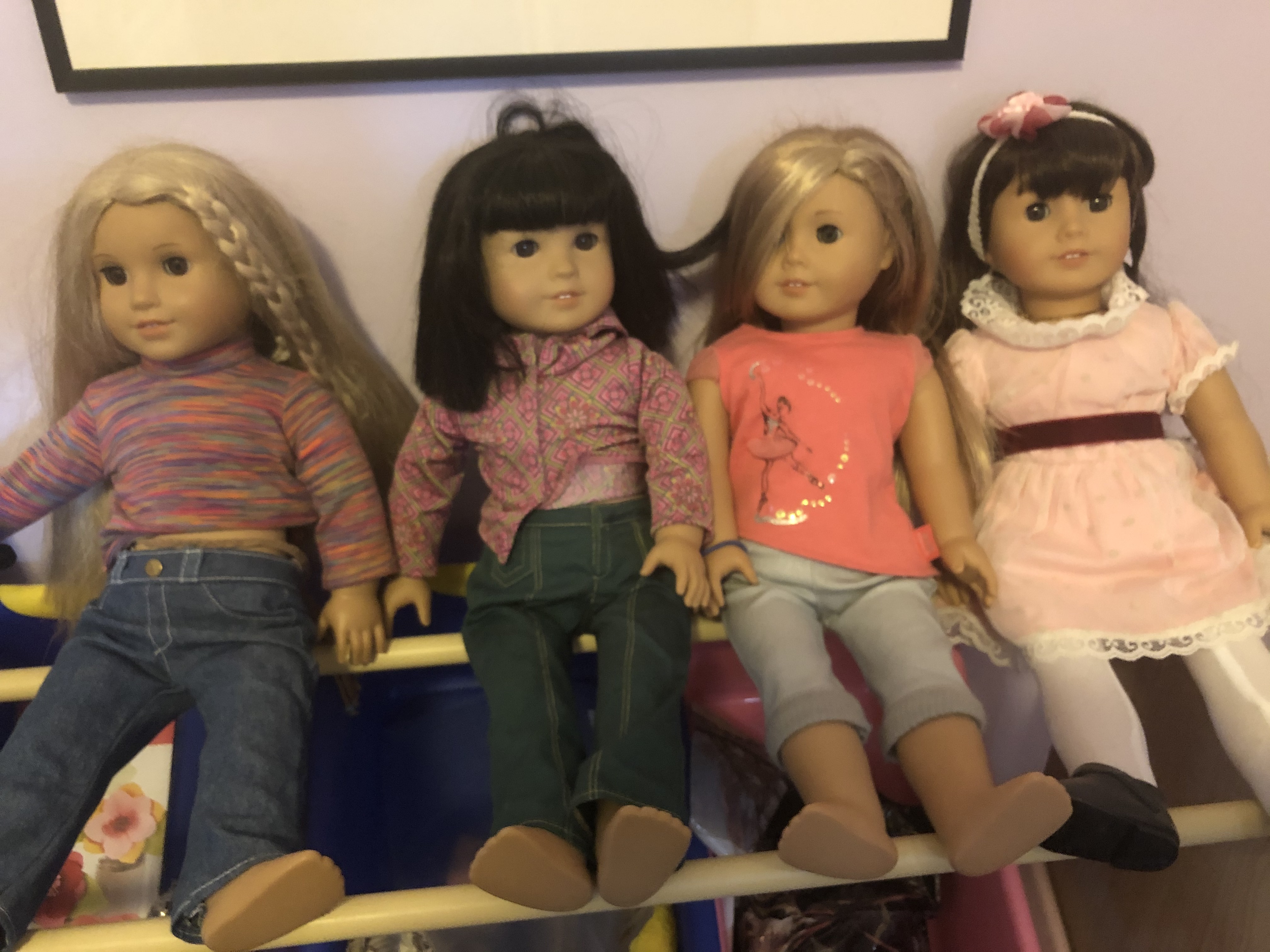 When she was in second grade, my granddaughter had four American Girl dolls and a fifth doll that looked like the others but was not authentic. Back then, she insisted I play a special game with her involving her American Girl dolls, each of whom came with her own back-story. They had lovely outfits and carefully groomed hair. These were my granddaughter’s characters.

I hoped my granddaughter and her peers would embrace the importance of sisterhood before the Mean Girl games of middle school took over.

My doll was Renata, the American Girl “wannabe” purchased from Target a couple of years earlier to gauge the level of her interest in these dolls before committing big bucks to buy one. Her hair stood on end and she wore outfits rejected for the other dolls. More importantly, her back-story was two words — she’s mean. My doll — the very mean Renata

I know this game was a second grader’s effort to sort out how girl relationships worked, but it disturbed me. I suggested Renata might have had her reasons for being mean. I wondered aloud if she would have been nicer if the other dolls included her and treated her kindly. But my granddaughter, who is a kind and inclusive child by nature, already knew how this girl thing worked. There was no room for understanding Renata’s motivation. As I was told whenever I tried, “She’s just mean and that’s all.”

There were numerous variations of the plot but the basic storyline was consistent. The two newest (and therefore most valuable dolls), Isabelle and Ivy, were good friends. The other two used to be Renata’s friends, but when given the chance to raise their social status by joining the popular dolls, they abandoned her. Then Renata was mean, which justified her rejection.

This painful plot must have replicated what my granddaughter had observed on the school playground or at summer camp. The game was a way to understand the rules of female social behavior. But in third grade, the plot thickened. She stopped playing the game with dolls and started to figure out how to navigate the scenario in real time.

Because she’s thoughtful and a sharer of information, she confessed to her mother that there was a “pay to play” scheme going on during lunch recess. Two popular girls had started a club. To join, you had to bring them a toy from home or give them part of your lunch. Some of her friends, eager to be included, complied with the rules of the game. My granddaughter thankfully turned down the opportunity and chose to play with girls who were not in the club. But one of her awesome eight-year-old friends was ambivalent. Sometimes she paid. Other times she resisted the allure of these Queen-Bees-in-training, who also told her not to eat all of her lunch because she would get fat. Remember, these were little girls. Boys had not even entered the scene yet. I shuddered to think about what these girls would be doing in middle school.

Most of the parents who found out about this club were distraught. They hadn’t imagined they would have to deal with this behavior at such a young age. A teacher also attempted an intervention. But the question remained: Would the behavior stop or would the girls just become more skilled in hiding it from adults?

In dealing with bullying we all tend to make a mistake. We usually focus most of our attention on the targets of bullying, especially on how we can help them avoid being victims. But the Queen Bees maintain their status by controlling the Wannabes, the silent majority of girls who are so worried about becoming a victim of bullying that they are willing to be cruel to avoid that fate. So it is this latter group that must be empowered to stand up for what is right. Teaching them to be true to what they know in their hearts is just and fair is the key. A Queen Bee without worker drones is not very powerful.

In retrospect, I see I played the doll game incorrectly back in second grade. When I focused on Renata and why the other dolls should include her, and when I tried to style her hair or find a better outfit for her to wear, I missed an important opportunity. Instead of empowering the two dolls with lesser status to resist the temptation to abandon their friend and curry favor with Isabelle and Ivy, I placed the burden on poor Renata to change her behavior and fit in with the others. Even though I begged my granddaughter’s dolls to be nice to Renata so she didn’t have to be mean, I missed the teachable moment in that game.

If I could go back and play the game again, I would encourage those dolls to stand with Renata. By the time my granddaughter was in fourth grade and would never play dolls with her grandmother, I still believed there was time to influence her behavior. Nine-year-olds could learn to empower themselves, resist the Queen Bees, and navigate the social scene with kindness rather than cruelty.  My hope back then was that my granddaughter and her peers would embrace the importance of sisterhood before the Mean Girl games of middle school took over.

It takes some effort by parents and teachers, but it is possible to lessen the bullying between girls. My granddaughter, now in eighth grade, identifies herself as an ally. This means she stands up for her LBGTQ+ friends as well as classmates from diverse backgrounds and untraditional families. I think she would befriend Renata now, and I’m pretty proud of that.

This story is adapted from my book  Terribly Strange and Wonderfully Real . I invite you to join my Facebook community.

11 Responses to Grandma and the Mean Girl Dolls