My daughter and my teenage grandchildren spent the pandemic in Israel where things were a lot more comfortable than here. While the boys went to school virtually, they were free to see their friends after school. When vaccinations became available, my daughter and her husband got them immediately, but the 16 year old called me to tell me he wasn’t sure he wanted to get vaccinated. He had heard (via social media, I guess) “horror stories.”

I asked him if he’d ever heard of polio. He said he hadn’t. I told him how, when I was a kid, everyone’s parents were so afraid of their children catching it that they kept us inside all summer, away from our friends and swimming pools and fun. I told him about children I’d known who were paralyzed by it, or spent their childhood in iron lungs. “The reason you haven’t heard of it,” I said, “is because there is a vaccine now. So no one gets polio anymore.”  I told him I was one of the guinea pigs…one of the kids who stood in line at my elementary school to get this new shot in the arm. And how excited we all were. He was silent. I continued,  “And you, Adiel, have had that polio vaccine, yourself!”

He called me a week later to tell me he’d had his first Covid shot and he felt fine. Then he called me two weeks later and said, “Savta! I got my second shot today and I couldn’t stop smiling for an hour after!”

Now I can’t stop smiling. My daughter and her family are on a plane flying back to California as I write this. I can hardly wait to see them. It’s been a long year. Thank science for vaccines. 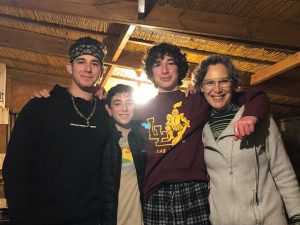