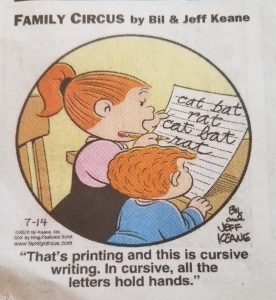 Mainly what I remember about learning script was that there were letters I liked and letters I didn't like.

This Family Circus comic was in the newspaper on Tuesday, as I was getting ready to start my story. It was so perfect, I had to make it my featured image.

I remember learning to write in cursive, although nobody ever used that word to describe it. We always called it script. I think it must have been in fourth grade. Since I wasn’t sure, I googled “when is cursive taught in school?” and the answer was “usually in third grade.” But I did second and third grade in one year (as described in What Did You Learn in School Today?) and didn’t fully arrive in the third grade classroom until at least February. If the class had already been learning to write script and I had to catch up, I would certainly remember that, and I don’t have any memory like that. Moreover, I also found online a book entitled Cursive Handwriting Workbook 4th Grade, which says in the product description, “At 4th grade, children are introduced to cursive writing.” This supports my hunch. Interestingly, this book was published in 2016, so apparently there is some demand for it even now.

Mainly what I remember about learning script was that there were letters I liked and letters I didn’t like. I didn’t like the capital F and the capital T, because you had to do them in two parts, the somewhat swoopy horizontal line at the top, and then the part that went down and around, which I thought was kind of ugly. I disliked the capital Q even more, because it just looked like a big 2, which seemed ridiculous. I liked the capital S, which was a good thing since it was at the start of my name and I had to write it a lot. I was glad I didn’t have a name that started with F or T or Q. All the lower case letters were fine, except that I didn’t like the way the v and the w connected to the next letter at their top instead of their bottom. But despite my feelings about the various letters, I learned them all, and wrote them correctly, as you can see by this page from my diary in sixth grade. (You will have to click on it if you actually want to read it.) 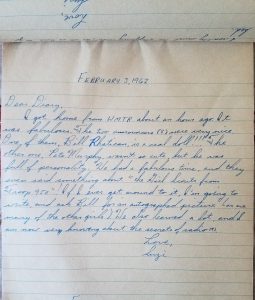 My sixth grade handwriting stayed pretty much the same until ninth grade. That year we had a required Business class instead of Science. Despite the fact that we were a college-prep high school, this was how the curriculum had been set up. It would have made more sense to have the Business class in eighth grade and the Science class in ninth grade, since colleges only looked at ninth through twelfth grade subjects, but they didn’t do it that way. We did learn a lot of useful things in the Business class, including how to touch type, how to invest in the stock market, and – relevant to this story – how to write in StenoScript, a type of alphabet shorthand. None of us were planning to be secretaries, or ever have to take dictation, but it was extremely useful for taking notes in class. All my class notes from high school and college are written in StenoScript.

In order to be fast, there were lots of shortcuts. The letter j stood for “tion” at the end of a word. A capital O meant “out” and a capital S was “st.” Other strokes stood for other letter combinations. Another time-saving measure was to omit the dots on the letters i and j, and the crossbar on the letter t. To this day, I never do the dots when I am writing (or printing) anything. I do cross my t’s though, because otherwise it could be a tall i or a short L. To give you an idea of how a page of StenoScript looked, here is a document I discovered tucked into my high school yearbook. My friend Joanie and I were writing notes to each other in StenoScript. I know it was in senior year, because in the next section I give a plot synopsis of the page of the Aeneid that we were reading in Latin class, and she talks about driving herself somewhere. I can actually still understand all of it! (Again, click on it to make it large enough to see.) 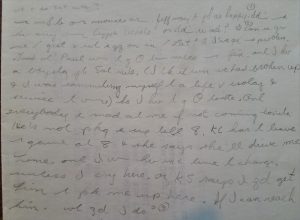 At some point, while I was still using the StenoScript abbreviations, I switched from pure cursive to a hybrid of printing and writing, which I still use today. The letters are still holding hands (as Dolly says in Family Circus), but they are mostly the printed forms of the letters rather than the cursive ones. Eventually it got to the point that the only time I used pure cursive was in writing checks. I made out the entire check that way – the date, the payee, and the amount, as well as the signature. At some point when I had a really long payee name (like two different people, or a business with a complicated name), or a dollar amount that had many digits to be written out, I realized I could fit more on the line if I printed than if I used cursive. So eventually I started printing everything except my signature. Not that I write checks very often any more, but when I do, only my signature is in cursive. (Although now that I have written this story, I may go back to using all cursive on my checks.) All the other places that signatures are required nowadays, like on touchpads at stores, it is so difficult to write a decent signature that mine has now devolved into a bunch of squiggles, with only the first letter of each name actually formed.

I am sorry that script, or cursive, or whatever you choose to call it, is now disappearing, even though I am one of the offenders. Everyone’s handwriting is distinctive, in a way that printing usually is not. As I said in an earlier story, Please Mr. Postman, looking at old handwritten letters or even just the envelopes is so enjoyable, and brings back memories of the person who wrote them purely from their handwriting, even before reading what they actually wrote. And it is sad that we are losing that. Or have already lost it.

16 Responses to Handwriting On The Wall

A cursive compromise
by Marian