Prompted By A Year in the Life
8 comments.

My first thought for A Year in the Life was to write about 2017, which stands out as the absolute worst year in my life. Primarily because of the unmentionable person who became President on January 20th, and caused horror and anguish every single day of the year. And also because my beloved mother died on February 8th, and I have still not recovered from that enormous loss. There were good things too, like my college and law school reunions, and the solar eclipse, but on balance it was a dreadful year and I don’t want to write an entire story reliving all that misery. Instead I turn to the year I was in second and third grade.

In September 1958 I had just turned seven, and I was in Mrs. Smith's second-grade class 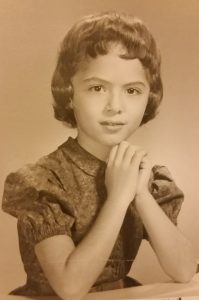 In September 1958 I had just turned seven, and I was in Mrs. Smith’s second-grade class at Number Three School in Belleville, New Jersey. (All the schools had numbers rather than names, which indicated the order in which they had been built. Number One through Number Ten, except there was no Number Six School because that was the high school. My school, Number Three, was the best one.) Second grade seemed exceptionally easy to me. In first grade we had had a bright young teacher, Miss Garcelon, who was excited about her first year of teaching, and did unconventional things like borrow the model of the human body from the high school and teach us anatomy. Mrs. Smith, who taught second grade, was extremely old and had white hair with more than a tinge of blue to it. She taught the curriculum the same way she had been teaching it for forty years or more. It was pretty boring, but I didn’t mind. I had lots of friends in the class. Also, any time Mrs. Smith needed to send a note to another teacher, I would get to be the messenger and go into a strange classroom, sometimes even waiting for a reply to take back. That was a lot of fun, I got to roam around the halls with impunity.

At some point in the fall, Mrs. Smith told me I would start going upstairs to one of the third grade classes for Reading. The two teachers must have synchronized when they taught Reading so that this would work. I did that every day, and appreciated that the material we were reading in third grade was more interesting than in second grade, although still easy for me, since I had been reading from the age of three.

A month or so later, Mrs. Smith told me that I should work at my own pace in our arithmetic workbook, instead of just doing the one lesson per day that the rest of the class was doing, and as soon as I finished the workbook I could start going upstairs for arithmetic too. I whizzed through the book pretty quickly and by winter break had two subjects with the third graders.

Some time after that, probably in February or March, Mrs. Smith made an announcement to the whole class that I would be leaving, and she told me to pack up my desk. What?? This was a complete surprise to me. What was happening? I thought I was being expelled from school! But I hadn’t done anything that bad, just talking and giggling with my friends sometimes when I was supposed to be paying attention. I was too upset and scared to say anything. Thank heavens my friend Diane O’Reilly said “Why is she leaving? And where is she going?” I waited for the answer with my heart in my mouth. “She’s going to be moving up to the third grade full time,” was the response. Well it sure would have been nice if somebody had told me — or wait a minute, maybe even asked me if I wanted to do this. But at that moment I was just so relieved that I wasn’t getting kicked out of school that I accepted it without protest.

I moved upstairs to Mrs. Soule’s class. She was another elderly woman with blue hair, who made me feel very much at home. And since I had already been going to her class for reading and arithmetic, it was a fairly easy transition. I missed my second-grade friends, but I quickly made new third-grade friends. The classwork was a little more challenging, although certainly not hard. The only problem, which had repercussions for years, was that I had missed “carrying” in addition and “borrowing” in subtraction. It must have been covered in the early part of third grade. So I never learned to do those functions in my head, I always had to write the little numbers in on the problems to see what I was carrying or what I had borrowed from. Of course nowadays with calculators, nobody has to know how to carry or borrow at all. But in elementary school, and even high school, it was an important skill.

In June, on the last day of school, when we were about to get our report cards which would tell us what teacher we would have the following year, all my third-grade friends said to me “well you will be in third grade again, since you only were here for half the year.” They were so sure that I thought they must be right. I wondered if I would have Mrs. Soule again or the other third grade teacher. But they were wrong. My report card stated that I was assigned to the fourth grade class of Mrs. Onions. I would continue my academic career with this new set of friends.

Obviously the school must have consulted with my parents before taking the highly unusual step of accelerating me like that. Why didn’t anyone ever talk to me about it? Probably the school expected my parents to tell me, and my parents thought the teacher would tell me. I have no idea what I would have wanted if anybody had asked me. Certainly the transition caused me a few moments of terror, because of the way it was handled, but on the whole I think it was the right thing to do.

That summer I went to sleepaway camp for the first time. Eight whole weeks away from my family. That was the final piece of that year of being seven. And the next year, in Mrs. Onions’ class, I had so many friends that I kept getting in trouble for talking in class, and she kept moving my desk, but whoever I sat next to became a friend who I would talk with. Bad for my grade in Deportment, but definitely a sign of social success!

Update, July 3, 2020: Yesterday I posted a comment on a Belleville facebook group, which I had just joined to get pictures for my My Hometown story. Today I got this message in response: “I remember you as Susan. We were in classes together and you skipped a grade. You would help the teacher with other kids in class. Hi I’m Diane O’Reilly McNulty.”

8 Responses to What Did You Learn in School Today?