Happy reading to all by Khati Hendry
50
(94 Stories) 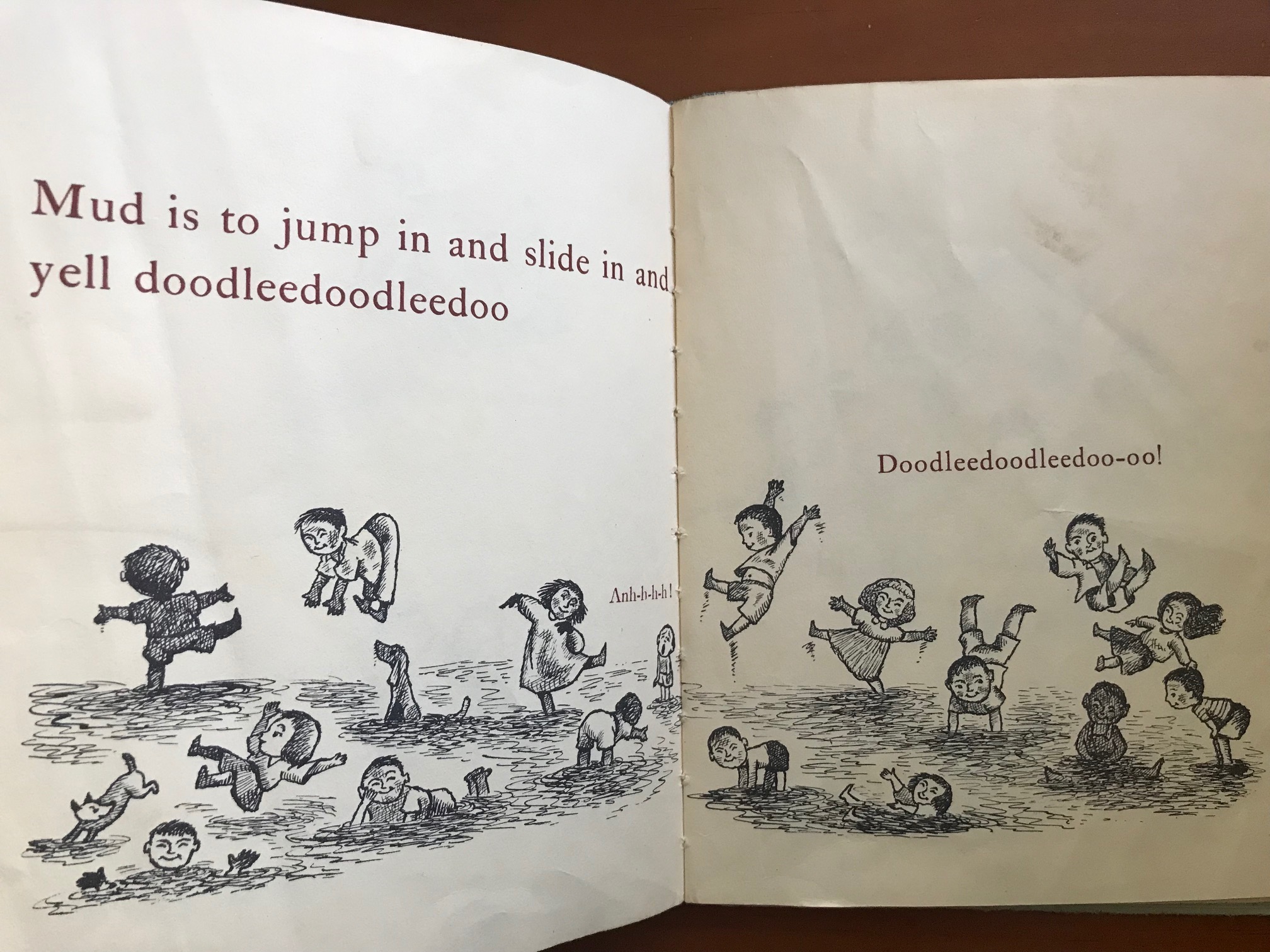 My parents valued reading.  One of my earliest memories is walking up the sidewalk, climbing a few steps, and emerging onto the Washington University campus where my father’s office hid in an old brick building.  He was teaching and finishing his thesis in economics, and this was a rare glimpse of his world.  I must have been four, my sisters six and two;  I don’t recall if we made our way alone, or if my mother brought us and then left so she could have a moment of respite.  I just remember it was the girls crowding around my dad, and it was a very special time.  Each week, he put aside his work and read us a chapter from Robin Hood—Maid Marian, Friar Tuck, the Merry Men, the Sheriff of Nottingham, Little John falling into the water—before we returned to the cramped domesticity of our grad student pre-fab housing.

I just remember it was the girls crowding around my dad, and it was a very special time. Each week, he put aside his work and read us a chapter.

Not surprisingly, I loved to read too.  When I was in second grade, I would sneak-read stories from my older sister’s third grade book on Greek mythology.  The Saigon American school must have contracted with the Calvert distant learning curriculum, and I can still picture the dark silhouette of a head gracing orange covers, with long spelling lists or math lessons inside.  But the mythology book was a blue soft-cover, spiral bound, 8 ½ by 11-paged delight, with coloring book style illustrations and enchanting stories–the race with the golden apples, the abduction of Persephone to the underworld, the legend of Icarus.  Lucky me, I got my own third-grade book the following year, and learned everything by heart. And then, when we returned home to Michigan, we stopped in Italy, where I found “my” stories in the museums, magically embodied in marble-fleshed statues.

We had children’s books at home, and I still haven’t been able to part with some of them a lifetime later, their bindings cracked, the odd crayon scribble inside.  We even had my father’s old “Elson Readers”, with its quaint pictures inside and an introduction that declared, “Kindness, helpfulness, contentment, industry, promptness, gratitude, love of Mother, and obedience are attractively portrayed in interesting stories, yet without any of the atmosphere of preachiness.”  While not entirely bad, you could probably come up with some alternative ideas to promote in a nanosecond. 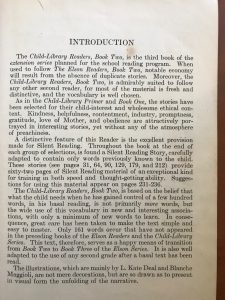 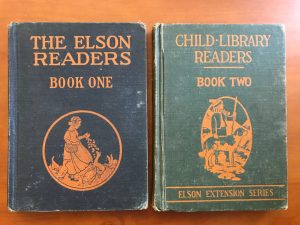 I can still picture the illustrations from  Robert McClosky’s “Blueberries for Sal” (Sal and Little Bear get mixed up on blueberry hill gathering food for the winter, and follow the wrong mother), and “Make Way for the Ducklings” (set in Boston Commons). 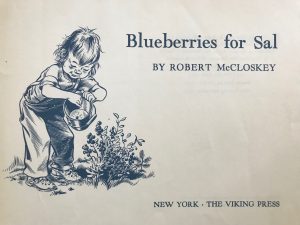 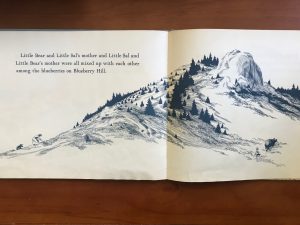 The irritatingly repetitive message from “The Little Engine that Could”’s message (I think I can, I think I can), was imprinted in my brain for life. More fun was “A Hole is to Dig”, with pictures by Maurice Sendak;  my favorite page was “Mud is to jump in and slide in and yell doodleedoodleedoo!” I loved the colorfully rich European costumes in “My Mother is the Most Beautiful Woman in the World” (set in Hungary, a lost child describes her mother–who in her eyes is the most beautiful), and the same illustrator, Ruth Gannett, created the world of Tangerina and Wild Island in “My Father’s Dragon”.  “Charlotte’s Web” (the spider and the pig) was sad but beautiful. 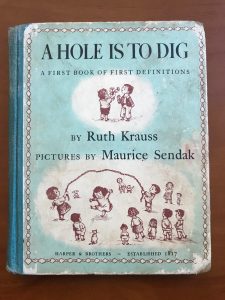 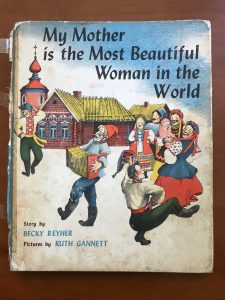 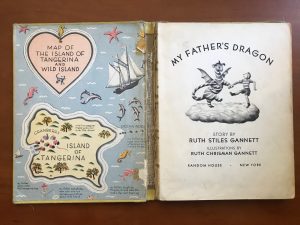 A.A. Milne’s “Winnie the Pooh” and “Now we are Six” were favorites of my parents, told with a subtle wit that spoke to adults (and spawned “the Tao of Pooh” later on).  Robert Louis Stevenson’s “A Child’s Garden of Verse” provided many hours of re-reading, as did “The Arbuthnot Anthology”, a thick hardcover compendium with over 400 thin pages full of poems, short stories, and excerpts from longer works. The table of contents alone was 12 pages.  You could open it at random and always find something new. 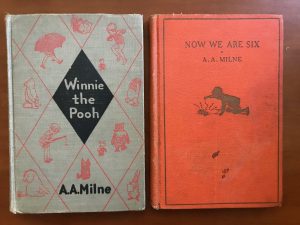 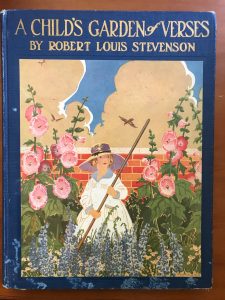 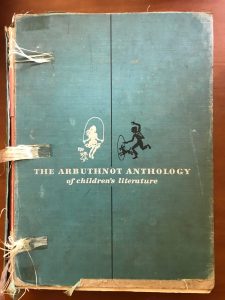 My mother also brought home the The Golden Book Encyclopedia along with groceries from the A & P, gradually accumulating the set; it was pretty basic but provided endless choices of disparate bits of information about the world.  I’m not sure how we ended up with “A Child’s History of the World”  (Spartans—hard as nails!  The little dog who greeted the returning Odysseus and then died of joy!).  I was enthralled but my history-teacher mother rolled her eyes at it, and I think it was probably the worst sort of Eurocentric simplistic junk foisted off on kids.

Not all stories came in books.  We had some 78 rpm records—Robin Hood, Sleeping Beauty, cowboy songs, nursery rhymes—with narration and songs that survive as earworms yet.  And I buried myself in the guilty pleasure of stacks of Classic Comics (Mutiny on the Bounty, A Connecticut Yankee in King Arthur’s Court, The Prince and the Pauper) that were kept to divert kids who were waiting outside the room where the next extracurricular dance class would soon start (my mother had signed me up); I confess that I devoured the comics while hiding in the corner instead of joining the class.

Instead of Disney princesses, I recall “A Little Princess” by Francis Hodgson Burnett (classic orphan story with lush illustrations), and “The Green Fairy Book” (traditional stories–also came in other colors, but mine was green). 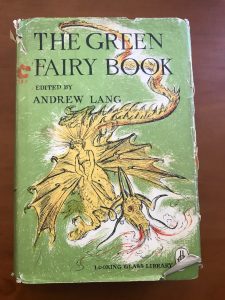 Although I suffered the inanity of “Dick, Jane and Sally” (Look, look, oh look!  See Spot run!), the small library room tucked into the basement of Marble Elementary School was stocked with rafts of book series for children—“The Hardy Boys”, “Nancy Drew”, orange-bound biographies of famous Americans from their childhood, which I binged on like a latter-day Netflix series.  That’s where I also found dog books—“Big Red”, “Irish Red” by Jim Kjelgaard, and “Banner in the Sky” by James Ramsey Ullman (mountain climbing thrills).

Of course not all children have the same experiences with reading, and the tsunami of telecommunications has imperiled books. Back in 1989, a group of pediatricians from Boston City Hospital were concerned about children growing up in homes without books or reading, so they developed a program called “Reach Out and Read”.  I found out about it when they contacted my Community Health Center to join the effort (there are now thousands of participating sites).  What a great idea–link health and education, and make reading part of every well-child medical visit.

The plan is simple.  In addition to getting height and weight, and other preventive health measures, the provider gives a book to the child, talks with the caregiver about how reading fits into the child’s level of development, and explains how to use the book. They take the book home.  It is never too early to start–even an infant can enjoy thick books with bright colors and textures.  The available books include families of different cultures, colors, and languages, and fortunately there are more diverse choices than when I was a kid. Over time, the home will have a small library.

If a caregiver doesn’t have good literacy skills, they can still tell stories about the pictures and use the book to reinforce their bond with the child.  Where volunteers are available, they spend time in the waiting area, showing through their actions how to share books and stories with the children. COVID has doubtlessly limited the program, but there is hope for the future.

To paraphrase Clement Moore: “Happy reading to all, and to all a good night.”

16 Responses to Happy reading to all