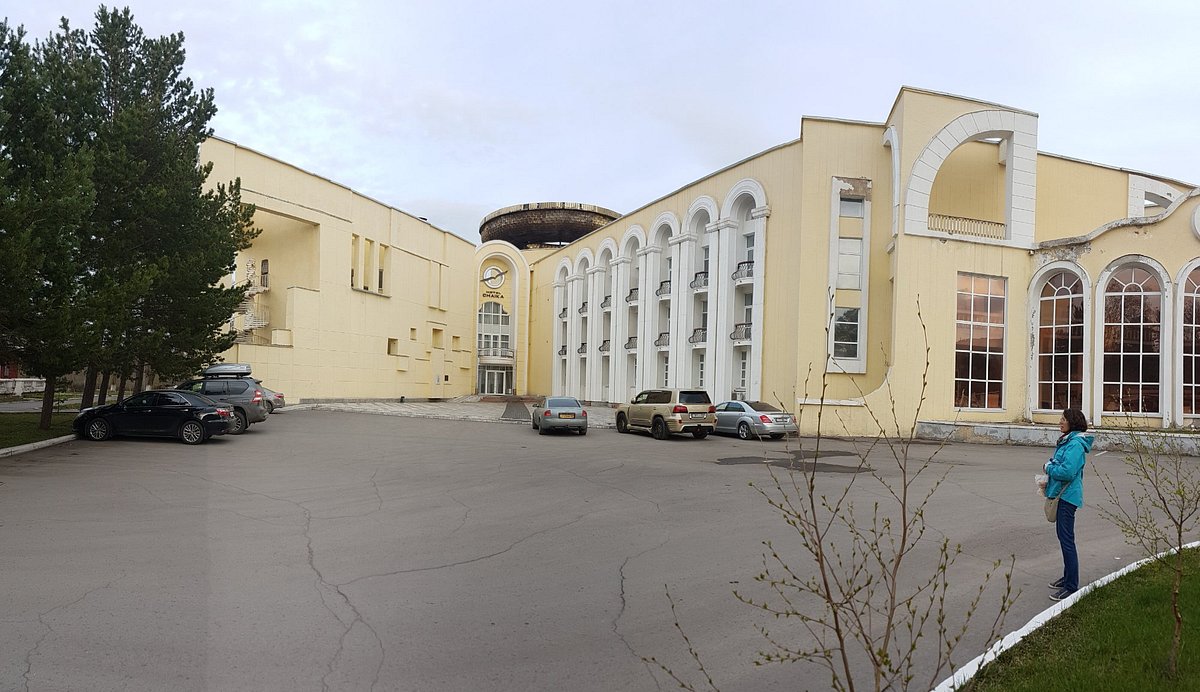 On January 19, 1995, I set off on a trip to Kazakhstan to help find ways in which American computer technology could help improve the safety and/or efficiency of the coal mining industry in that country, which had recently become an independent state, no longer under the domination of the Soviet Union.  I left Columbus on a Thursday evening, and traveled to Cincinnati and Frankfurt  before arriving in Almaty,  Kazakhstan early on Saturday morning.  (The total travel time was about 24 hours, but took place over parts of three days because of the different time zones.)  I’ll write about the two weeks I spent there and the adventures I had at a different time, but this note is about the hotels I experienced there.

I was picked up at the airport by Sasha, the driver for Alan Irving, an employee of the Agency for International Development and my guide for the two weeks I was in the country.  Sasha took me to the Hotel Kazakhstan in the center of Almaty.  I learned that the the hotel was the only large building left standing after a disastrous earthquake some years earlier.  It is a tall building, maybe twelve stories or more, and appeared to be very modern in its architecture.  The first thing I noticed was that there was a team of women who spent their entire day mopping the floor in the lobby – as soon as they had finished mopping, they would start over again, all day long.  I made my way up to my room where I met the dzherniya, the floor lady, who was responsible for everything that happened on the floor.

My room had a small bed that was made up with sheets and blankets wrapped up in a way to provide a very warm and snug place to sleep.  There was a small bathroom with a shower,  a sink, and a toilet through which water ran constantly, which made it tough to sleep.  I lay down for a few hours to try to adjust to the jet lag, but was awakened after a few hours, when the telephone rang.  It was a prostitute offering her services – apparently the prostitutes have arrangements with the floor ladies and call around to the rooms until they find a willing client.  (I was told that if a hotel guest repeatedly declines the services of a female prostitute, he will then start getting calls from male prostitutes, but that did not happen in my case.)

The next morning, Sunday, Sasha drove Alan and me to the airport and we caught a flight to Ekibastuz, a city of around 140,000 people in an area near a gigantic surface mining operation, which I consider to be the eighth wonder of the world.  (Ekibastuz also happens to be the city where Alexander Solzhenitsen was sent during the Soviet era.)  Alan and I were picked up at the airport and driven to the Gastinitsya Byelochka, the “Little Squirrel Hotel”, where me met Rick, the chair of the mining engineering department at the University of Kentucky, and Jim Dinger, a geologist from the same university.  They had already been in Ekibastuz for a week, working on ways to mitigate the pollution caused by dust from the massive mining operation which surrounded the city.

When we checked into the hotel, I was asked to hand over my passport!  I was concerned about that, but Alan assured me that I would get it back, that the police wanted to know every person who came into town.  Dinners at the hotel consisted of whatever the staff could find in what went for grocery stores there.  Rick and Jim had already made it clear that they were not going to have another meal of beets, so we were spared that, but we had a lot of thickened sour cream, which the Russians there considered quite a delicacy, eggs when they could find them, meat which was almost certain to have been horsemeat, and some vegetables, along with truly horrible coffee or somewhat better tea (chai).

We visited coal mines in the area on Monday, Tuesday, and Wednesday then flew back to Almaty on Thursday and checked back in to the Hotel Kazakhstan.  By that time, I was very happy to find a nice big glass of thickened sour cream for my breakfast on Friday morning.  Rick and Jim flew back to the US on Saturday.

On Sunday, Alan and I flew to Karaganda, a major city of about 640,000 people  around which were some twenty-six deep mines, twenty-five of which were on strike.  (The miners were on strike because they hadn’t been paid in months, because the coal mines had hot been paid by the power companies in months, because the miners had not paid their power bills in months, because…)  In Karaganda, we checked into the Gastinitsya Chaika, the Seagull Hotel.  At the front desk, they told us that our rooms would be the equivalent of $280 per night, each, but Alan talked them down to just $28 per night, which was more than enough, considering that that there was no hot water in the hotel!  (This was in the middle of winter in an area close to Siberia, where the temperature typically dips down to -40 degrees!)

One interesting thing about the Seagull hotel is that it was right next to Kosmonaut House, where the cosmonauts were taken to recuperate after spending time in space.  There is a plaque on the wall of Kosmonaut House with the names of some of the people who had stayed there, including Valentina Tereshkova, the first woman to travel to space. 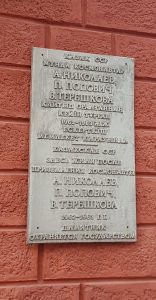 While we were in Karaganda, we went underground at the only coal mine that was working,  I was accustomed to going underground at coal mines in the US, but on this trip I found myself down approximately 2600 feet, half a mile, the deepest I had ever been.  During the time we were in the mine, we didn’t see a single lump of coal actually moved out of the face, because the equipment was broken down, typical of mines in that area.

On Thursday, we again flew back to Almaty.  As I tried to check back into the Hotel Kazakhstan, other people kept crowding in front of me, until I loudly yelled out “Nyet!  I was here first!”  They looked at me with shocked expressions, but made way for me to get up to the front desk and check in.

On Sunday mornings in Almaty, all of the people working for the AID would gather for brunch at the Hotel Dostyk, which had been the Communist Party hotel during the Soviet era.  This was the highlight of the week, with every kind of meat, eggs, pastries, and other foods imaginable, and with REAL COFFEE, rich, dark, hot coffee, and as much of it as you could drink.  The $25 price of the brunch was worth it just for the coffee.

On the second Sunday that I was there, I happened to look across the table at Jim Gershin, a guy who hosted a get-together for English-speaking people every Thursday at his apartment, where we could unwind after a week in the field working solely through translators and hear English spoken for the entire evening.  (It was my desire to get over to Jim’s apartment that Thursday after the time in Karaganda that made me yell out to get to the front desk at the hotel.)  Anyway, I noticed a ring on Jim’s finger and asked him to pass it over to me.  It was his class ring from the Harvard class of 1970, just a year before I graduated.  It turned out that he had been on the Harvard crew, knew my classmate Tom Tiffany, who had been the cox on the crew, and had been at the historic game in 1968 when Harvard beat Yale 29-29.

On the Saturday after the Karaganda trip, I flew back to the US.  Going that direction, I left on Saturday morning, and was back in Columbus Saturday evening – a time zone thing again.

10 Responses to Hotels in Kazakhstan in 1995