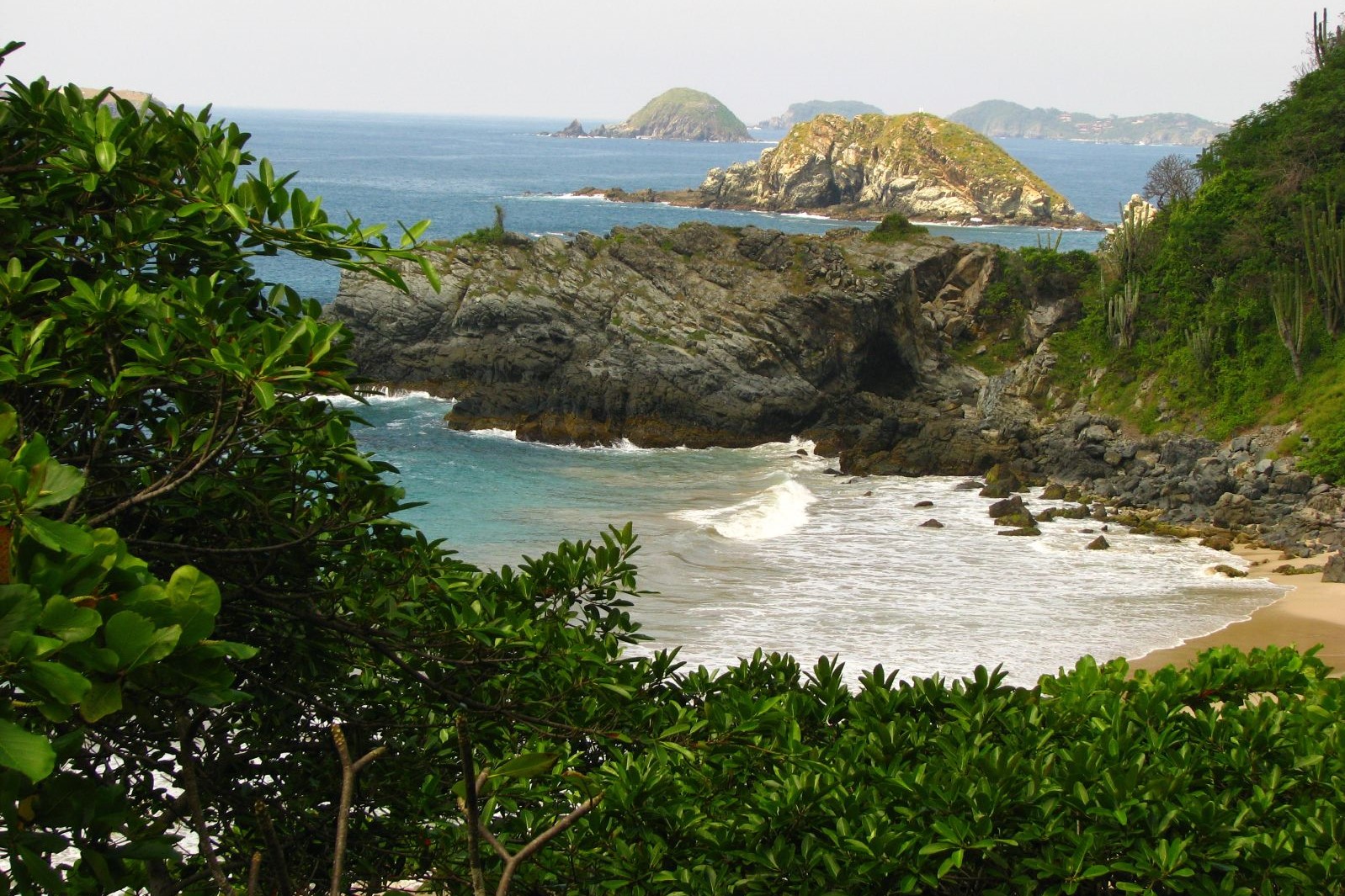 While not the exact place we stayed, this is what the beach looked like on the Manzanillo coast.

I have stayed in many wonderful and quirky places over the years, including B&Bs. One of my more recent favorites was a small hotel in Amsterdam somehow created out of a 17th-century warehouse. We were on the top floor, facing a canal–delightful. But mostly, this prompt triggered memories of rustic places in the past that are now fully developed areas.

So it went for most of the night, and it was impossible to sleep. Instead of an ocean view room, we had an ocean.

One notable hotel was in Jaco Beach, Costa Rica, on the Pacific Coast, where my mom and I stayed with my brother, who was a Peace Corps volunteer. While this beach is now a major resort, when I was there in the early 1980s we had to fly from San Jose, the capital, because there were no good roads. We took a a small plane with a man who was going to repair the generator at the hotel. Apparently electricity and water weren’t a given.

We landed in a rice field, and children ran to greet the plane, as in a movie. The hotel was built right between the jungle and the beach, and fortunately the generator repair was successful. Our room was simple but comfortable, and as night fell, from our balcony we could see green winking eyes of jungle creatures peeking out from the trees.

The strangest place I’ve stayed was on the Pacific Coast of Mexico, near Manzanillo. It was 1979, and my first chance to have a vacation with my then boyfriend Hugh. Our budget was limited, but our trusty travel agent (remember them?) got us places to stay first in Puerto Vallarta, and at the end of the trip in Guadalajara. We wanted to spend at least a night in between away from tourist areas and cities. In a guidebook I found a small hotel on the beach near Manzanillo, and it said the owner spoke English. I called and spoke to the owner, who did speak English, and reserved an ocean view room.

The first part of the trip went OK, although right before we left Puerto Vallarta for the Manzanillo area, I ate something that triggered the ailment common in Mexico. I drank a lot of Coca Cola and couldn’t eat anything. Between PV and the Manzanillo coast, there was one very narrow, winding road through the jungle, and Hugh and I boarded a bus. My Spanish was and is limited, but I could read signs and talk in very simple sentences. Despite being from Texas, Hugh’s Spanish language skills were completely lacking. He made up for it by being 6’3″ and very strong–a combination of Scotch-Irish and Cherokee (think Kris Kristofferson the size of Johnny Cash). I felt totally safe.

It was a long, dense ride south through the jungle. Federales would suddenly appear from nowhere and cross the road. We met poor but very nice people on the bus, who clearly wondered what the hell we were doing there. At least there were no chickens on the bus. I was able to explain where our destination was, and they kindly gave us updates on how much longer it would take and pointed the way when we got there.

We made it to the hotel, which looked more like a motel, and the owner showed us to our room. It was spartan with a concrete floor, which I thought was strange, with two twin beds and ceiling lights that worked from metal pull chains. Out the front window, indeed we could see the narrow beach and nearby ocean.

At this point we wanted something to drink at very least, and we wandered into the hotel lobby and asked where we could get food. Everything was closed. We headed down the road and saw no buildings of any kind. I saw a young man coming toward us, and after a halting conversation, we realized we both knew French, and switched to that language. He told us there were no facilities on the coast and that we would have to go into Manzanillo. He even helped us get a taxi. In Manzanillo we stocked up on soda, canned juices, and packaged bread, and returned to the hotel, where we spent some time on the beach and dipped in the swimming pool to cool off. Exhausted, we went to our room, looking forward to a sound sleep.

That wasn’t to be. Hugh, who had been making fun of my “weak” stomach, began feeling effects of the tourista. There was no air conditioning in the room, and it was muggy despite the open window. Insects and arachnids of all sorts abounded. About 11 PM, I heard a whoosh and then a thunk. A few minutes later, another whoosh and a thunk. A third time, even louder.

I stumbled out of bed to the window and saw that the entire beach was now ocean, and the ocean was “thunking” on the wall of our room. It was high tide. I bit of salty water even oozed onto the floor. So it went for most of the night, and it was impossible to sleep. Instead of an ocean view room, we had an ocean.

By the next morning, the beach was quiet and the sun was drying out the damp sand. It was already hot. Armed with some warm Coca Cola and leftover bread, we checked out of our ocean view room and trudged back toward the jungle and the bus stop. At least on the long ride back to PV sleepiness took over, and we snoozed most of the way back. We quickly headed to the airport for our flight to Guadalajara. 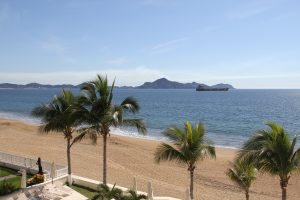 This is what the Manzanillo beach looks like today, near the fancy Las Hadas resort.

Guadalajara turned out to be a fascinating city, where we stayed in a lovely posada-style hotel. The day after we arrived there, we had a meal at the Holiday Inn, which had an internal purified water system and good food. I was never so grateful for a simple chicken lunch and the sight of a Holiday Inn. Despite our travails at the “ocean view” room, I am glad we got to see Mexico as Mexicans experienced it, uncomfortable as it was.

18 Responses to The Oddest Ocean View