I liked Ike, but I was supposed to root for Stevenson by Charles Degelman
100
(152 Stories)

Prompted By That Was Then, This Is Now
15 comments. 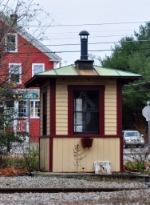 Then: Waiting in the railway crossing shack with the gate keeper, hoping for a Boston & Maine diesel to come along.

Now: Wishing I could feel the earth shake as a steam locomotive rolled past with a full load of freight, throttle wide open to make the grade.

Then: Watching my mom crank the phone to get Rozzie the operator on the line. Listening to them gossip while Rozzie sat at the switchboard plugging and unplugging callers. Watching my mom remember she had a call to make. We had a four-digit phone number.

Now: Suppressing the impulse to text while driving on the Interstate.

Then: Listening to the Red Sox game on the radio.

Then: Sitting in Harvard’s men-only Lamont Library, Cliffies excluded, circa 1966, reading the Crimson as it reported that the presence of female students might distract the young gentlemen.

Then:
I was supposed to be rooting for Stevenson but Eisenhower had these cool ‘I Like Ike’ t-shirts. 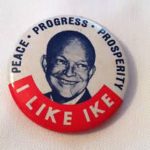 15 Responses to I liked Ike, but I was supposed to root for Stevenson